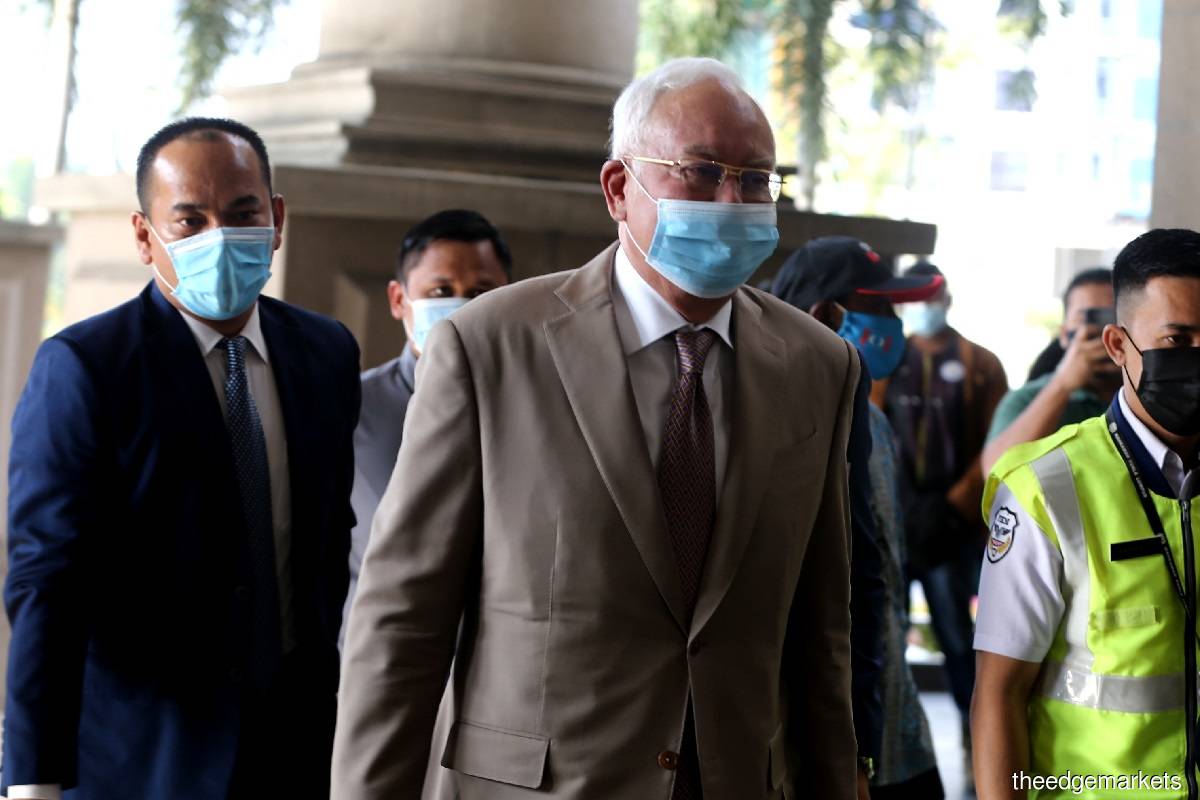 KUALA LUMPUR (Feb 9): Former prime minister Datuk Seri Najib Razak is alleged to have received a total of US$971 million (RM2.973 billion) said to have originated from 1Malaysia Development Bhd (1MDB), without any commercial or business justification, the prosecution in the condo raid of 2018 told the High Court here.

Describing the amount as "gargantuan", the discovery follows the investigations conducted by the police's Commercial Crime Unit, that found the three tranches of payment made to the former premier's AmBank account whose last three digits are 9694.

The three tranches of payment are said to be ill-gotten gain, and investigations of the police unit's Anti Money-Laundering by Supt Foo Wei Min found the movement of monies from Good Star (US$120 million in five transactions between 2011 and 2012), Aabar stage (US$170 million — six transactions in 2012) and the Tanore stage (three transfers in March 2013).

"ACP Rajagopal, who was the initial investigating officer during predicated investigation, only discovered the tip of the iceberg based on a report by Datuk Seri Khairuddin Abu Hassan. Based on a detailed money trail conducted on Najib's 9694 account; he actually received more monies originated from 1MDB as shown in Supt Foo's money-laundering investigations.

"Applying the 'First-In-First-Out' financial analysis on that Najib's account, the money trail shows that of the total RM2.973 billion he received, RM2.034 billion was returned to Tanore's account. The balance money of RM939,546,219.96 in the account was transferred or spent by the former PM in four broad categories."

DPP Muhammad Saifuddin Hashim Musaimi, who heads the Money Laundering and Forfeiture of Criminal Proceeds unit of the Attorney General's Chambers, said this in opposing to third-party claims made by UMNO of RM114,164,393.44 and from Najib, following the Pavilion condo raid in 2018.

Najib is presently on trial with regard to the Tanore phase, while he had earlier been found guilty and sentenced to 12 years' jail and fined RM210 million in seven charges related to SRC International Sdn Bhd funds, a former subsidiary of 1MDB.

Saifuddin said the prosecution is objecting the hearing of the third-party application by UMNO and Najib in instalments, as it is the prosecution's case that all seized items are either the subject matter or evidence to the commission of money laundering offences or proceeds from unlawful activities arising from misappropriation of 1MDB funds.

"The hearing by instalments also denies this court the benefit of cross-reference to the full evidence should this claim for the cash await and be heard together with forfeiture and claims for all the other seized items," he said.

The matter is being heard before Justice Datuk Muhammad Jamil Hussin who in December allowed separate third-party hearings claim on the items seized in the May 17, 2018 raid following Barisan Nasional's loss in the 14th general election.

Najib for the record has denied that it was 1MDB money and maintained it was donation from the Saudi monarch.

Out of the RM939.55 million in the 9694 account, the police and prosecution have divided the expenditure to Najib's 1880 AmBank account, payment to political parties, individuals and companies or entities.

The prosecution also accounted the various transactions made by the Pekan member of Parliament (MP) utilising those accounts where payments were made to UMNO headquarters, not to mention the various state liason committees, divisions and UMNO leaders and politicians — among them former Federal Land Development Authority chairman Tan Sri Shahrir Samad and Pontian MP Datuk Seri Ahmad Maslan.

Both of them are now subject to money-laundering proceedings, as with some of the BN component political parties alleged to have received those monies.

It was previously reported that the authorities were seeking RM212 million from UMNO headquarters and this amount was reduced to RM192 million. However, the forfeiture application failed at the High Court, and is now on appeal to the Court of Appeal.

As the prosecution and police had shown that the origin of the money was 1MDB and the money trail from overseas to the former premier's accounts and the transactions, Saifuddin said the government is entitled to confiscate it including the disputed RM114 million cash including foreign currencies.

The DPP added the primary concern of a forfeiture application under Section 56(1) of the Anti Money Laundering, Anti Terrorism Financing and Proceeds of Unlawful Activity Act is with the legal status of the property seized, and not the guilt or otherwise of any person for a money laundering offence under Section 4(1) of the same Act.

"The grounds upon which forfeiture can be ordered are wide enough to cover different situations so long as the status of the property falls under any of the following categories namely the subject matter or evidence relating to the commission of a money laundering offence, the proceeds of an unlawful activity or instrumentalities of an offence and terrorist property (which is not applicable)."

A hearing date over their contest has yet to be fixed and as mentioned, for this reason the prosecution is objecting to the proceedings.

Police seized valuable items including close to 12,000 pieces of jewellery, 423 valuable watches, 284 handbags, and 234 sunglasses, worth between RM900 million and RM1.1 billion in total, according to police estimates.

The proceedings since yesterday are done under close door and theedgemarkets.com sighted a copy of the submission.

Shafee and Hariharan will reply to the prosecution's objection to the third-party claim on March 11 and 15 before Justice Jamil.