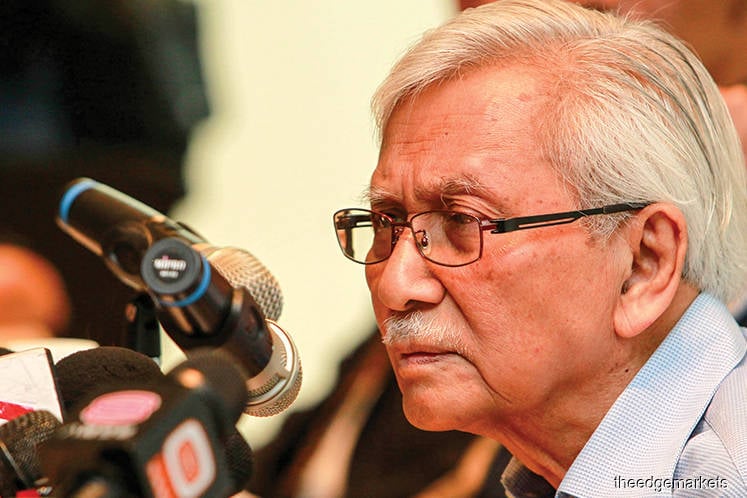 KUALA LUMPUR (April 21): Tun Daim Zainuddin has questioned whether it was a personal emissary of the former prime minister, who working on his own was involved in direct discussions and negotiations on the old East Coast Rail Link (ECRL) contract.

"Was it a personal emissary of the former PM or was it an official representative of the Government, as should have been the case," he said.

Daim asked whether the personal emissary directly negotiated with China and China Communications Construction Company Ltd (CCCC), resulting in the old ECRL deal being inked at a hefty cost and devoid of transparency and accountability to the rakyat.

"Was it prepared by the EPU as should have been the case, or was the EPU merely directed to adopt a paper prepared by another agency?” he asked.

Daim, who is Prime Minister Tun Dr Mahathir Mohamad's special envoy to China to renegotiate the old ECRL contract, raised these questions in response to Datuk Seri Najib Tun Razak apparently being very active on social media in defending the deal signed by his administration.

The former prime minister "neglected good advice" from his own government agency -- the EPU -- at the expense of the rakyat in pushing for the old ECRL project at a hefty cost of RM65.5 billion, Daim said in an interview with Bernama recently.

"The former PM says he has 'reservations' about the new ECRL deal.

"I would like to remind him that the whole of Malaysia had many more “reservations” over the old ECRL deal – its shady conception, lack of transparency, lack of integrity, hasty approval, its vague details, its hefty cost, the absence of accountability to the rakyat, etc," he said.

Daim said there were some feeble attempts to justify the old ECRL deal as being recommended by a McKinsey study that was presented to the Economic Council in 2015 and 2016.

"I was reliably informed that the study recommended the ECRL alignment stretch from Tumpat to Gombak and the project is to be phased over a period of 18 years with a cost of RM47 billion.

"This was in recognition of the low economic returns and hence the report proposed that phase 1 should be Mentakab to Dungun and be built for freight traffic only.

"Well, we all know what happened. The former PM instead signed an ECRL deal costing RM66.7 billion and decided to implement it in one go,” he said.

Furthermore, in the findings and recommendations for the ECRL market sensing exercise commissioned by SPAD (Land Public Transport Commission) in June 2016, respondents had requested a period of 24 months to prepare submission bids, he noted.

“Yet, the BN government chose to award the project just two months later in August 2016 via direct award (and) this too despite the expressions of interest from other bidders.

"Why did the Finance Minister at the time – who happened to also be the former PM – agree to a 15 per cent advance payment to CCCC for the ECRL project as this was unprecedented since the government had always capped advance payment at 5-10 per cent, which was usually restricted to contracts involving the provision of supplies.

"Even Bumiputera companies were not given such a privilege. Why the rush by the former PM to disburse over RM10 billion to CCCC?

"We should ask him what his motive behind all these manoeuvres was," he said.

Daim, after nine months of painstaking efforts, succeeded in renegotiating a supplementary agreement for the ECRL with a considerably lower price tag of RM44 billion, down 32.8 per cent or RM21.5 billion compared with the old price of RM65.5 billion.

He said there was a likelihood of the cost coming down even further following future technical discussions between project owner Malaysia Rail Link Sdn Bhd and CCCC.

Daim said: "What we have now with the new ECRL deal is one that is transparent, accountable and trustworthy with the full facts and figures available for public knowledge.”

The ECRL is no longer shrouded in secrecy, mired in controversy nor filled with unnecessary and highly expensive elements, he pointed out.

"It is now a functioning project that is more affordable that will serve the rakyat, whose interests are paramount when initiating and approving any Government initiative," he said.

In response to accusations the improved ECRL deal is no deal at all, Daim said, "I find it distasteful to argue with those who do not talk sense and prefer instead to spread fake news, like how the former PM has been doing lately. I would rather listen to experts and argue logically."