Najib: I appointed myself finance minister because I can develop the country's economy 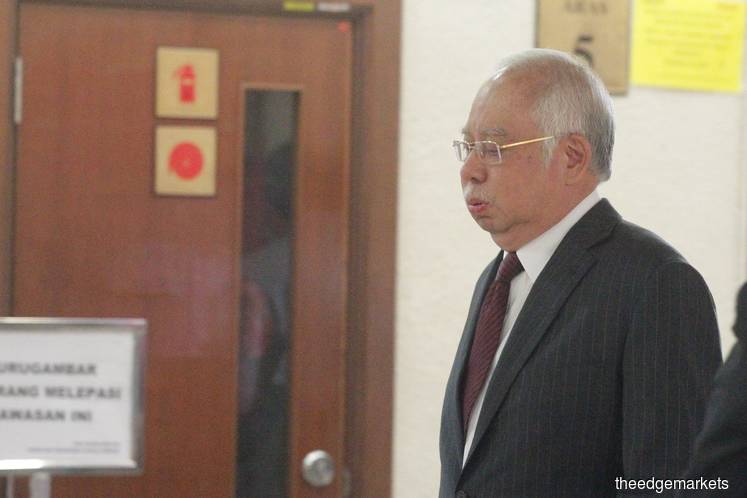 KUALA LUMPUR (Dec 10): Former prime minister Datuk Seri Najib Razak told the High Court today that he appointed himself as the finance minister as he thought he had the ability to develop the country's economy.

Najib said this in response to a question by Attorney-General Tommy Thomas as to why he assumed the finance minister's position when he was already the prime minister, Umno president and Barisan Nasional chairman.

"Because I felt that I have the ability to improve the country's economy. If you look back at the nine years [I was prime minister] from the big picture, our country has improved in terms of GDP (gross domestic product). In 2017, our economy grew 5.9%.

"During my tenure as finance minister, we grew faster than the Asian tiger nations. We had the longest bull run [in the stock market]. It was not a rollercoaster, we grew steadily.

"The ringgit was stable during my time. The welfare of the rakyat, many people enjoyed more benefits.

"I'm not bragging but I have delivered to the best of my ability as a finance minister," Najib answered.

When asked if he had the right qualifications for the role, Najib said he has the foundation and interest in economics. He said given his bachelor's degree in Industrial Economics from the University of Nottingham, he felt he was up for the job.

Thomas then grilled him further, asking how was it possible to hold the two top roles in the cabinet — prime minister and finance minister — given the significance of the two portfolios.

However, Najib deflected from answering the question, saying only that he was not the first prime minister to hold two portfolios.

Thomas pointed out that as prime minister, Najib earned RM1 million a year which he opined that compared to leaders in other countries, was a very low wage for a "man that is steering the ship of the nation".

When he suggested that this was a sacrifice to the nation, Najib concurred.

Thomas also suggested that the position of prime minister commands massive power and influence in the country, with the authority to "hire and fire" top positions in the civil service as well as statutory bodies.

Najib agreed but maintained that the prime minister's powers have limitations and are not absolute.

Najib insisted that he did not sack Muhyiddin for disagreeing with him on 1Malaysia Development Bhd (1MDB) issues, but because the latter was speaking in public about his disagreement with Najib instead of doing so within the cabinet sphere.

Thomas: You were not shy to use that power as you fired your then deputy prime minister Tan Sri Muhyiddin and Datuk Seri Shafie Apdal.

Najib: I didn't just use my power that way.

Thomas: This is a fact. It is well known that you sacked them.

Najib: I sacked them because they made statements in public when it should have been done in Cabinet [meetings].

Both Muhyiddin and Shafie lost their Cabinet posts in a reshuffle that took place in 2015 after publicly criticising 1MDB.

Later in the afternoon, Najib said he never removed people from his administration but in the case of the two, they did not abide by the collective responsibility of the Cabinet by making statements in public.