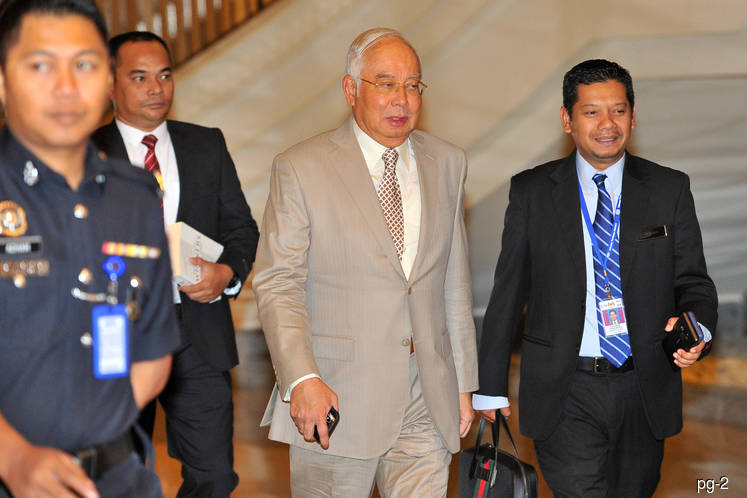 A three-member bench led by Court of Appeal Judge Datuk Zabariah Mohd Yusof ruled that the appeal raised by Najib has no merits.

When delivering the court's unanimous decision, Justice Zabariah agreed with the prosecution that Kuala Lumpur High Court judge Collin Lawrence Sequerah's ruling on March 1, 2019, does not amount to a "decision" under Section 50(1) of the Courts of Judicature Act 1964 and therefore, the matter is not appealable.

She said the Court of Appeal found that the decision of the learned High Court Judge in dismissing Najib's application to have the letter of appointment produced and disqualify Sri Ram from acting as a senior deputy public prosecutor was a decision made in the course of the trial which does not dispose of the rights of the parties.

Based on this alone, the appeal ought to be struck out, she said.

However, Justice Zabariah said the court also proceeded to consider the merits of the appeal by Najib on the decision of the High Court to dismiss his application.

The court found that the fact of the appointment of Sri Ram under Section 376(3) of the Criminal Procedure Code was never in doubt as Najib's counsel had sight of the said letter when it was shown to him, she said.

The section does not require the appointment to be made in writing or to be produced upon demand or to be gazetted, Justice Zabariah added.

She stressed that Sri Ram, like any other deputy public prosecutor, is entitled to supervise and oversee an investigation but not to investigate the case himself.

"There's nothing before the court, for now, to show that there's a real danger of bias by Sri Ram if he continues to act as prosecutor in this case," she added.

She said what was alleged by Najib was a mere general suspicion and not based on specific facts in order to disqualify a prosecutor.

The burden is on Najib to show cogent evidence and with certainty of such biasness and not mere bare allegations, she added.

Besides, Justice Zabariah also ruled that it has not been shown how the fact that Sri Ram had:

would affect his professional objectivity in conducting the prosecution against Najib.

"It is the duty of the trial judge to take control of its own proceedings and the trier of fact who will ultimately decide the fate of the accused person, in this case the appellant (Najib)," she stressed.

Regarding the alleged perjury committed by Sri Ram, the court is of the view that whatever had happened, it was never shown that Sri Ram had been found guilty of perjury or any misconduct by any authority.

"We therefore found that the learned judge (Justice Sequerah) did not err when he held that the allegations of perjury are mere allegations unsupported by any evidence or material as they had not been proven in any court of law," Justice Zabariah said.

"Given the aforesaid, the appeal in our view has no merits. We therefore dismiss the appeal by the appellant (Najib), and the decision by the High Court judge is therefore affirmed," she ruled.

She further said the decision does not prevent Najib from making a similar application in future if there are facts to substantiate his stand.

Besides, the Court of Appeal did not make any order for a stay on the High Court trial and ordered the defence to make a formal application.

He was charged with committing the offences at AmIslamic Bank Bhd, No. 55, Jalan Raja Chulan, Bukit Ceylon, between 2011 and 2014.

On March 1, 2019, Justice Sequerah dismissed the application by Najib to challenge the appointment of Sri Ram and concluded that there was no evidence to show that Sri Ram would be acting in a biased manner as senior deputy public prosecutor in handling the case.

Najib then filed an appeal to the Court of Appeal and request for a stay of the trial.

After the decision today, Najib's lawyer Tan Sri Muhammad Shafee Abdullah indicated to the court that he has received an instruction to appeal against the decision to the Federal Court.

"We will be also seeking for a full quorum, at least a seven-member bench to hear the appeal," he stressed.

Shafee said the trial of the 1MDB case has been scheduled to begin on Aug 19, and no adjournment will be allowed by Justice Sequerah.