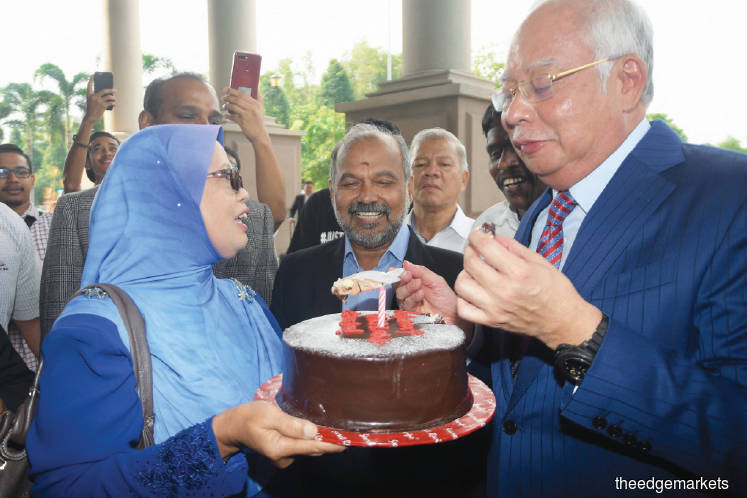 Najib (right) having a bite of his birthday cake before heading into the courtroom for his SRC trial yesterday. Photo by Shahrin Yahya

Clad in a blue suit and red tie, the “birthday boy” was tightly surrounded by his fans as soon as he stepped out of his car.

Najib appeared startled when the group surprised him with a cake and a birthday card at the front corridor of the court complex.

The supporters sang him the Happy Birthday song before he blew out the candle on the cake.

He managed to cut a slice and take a small bite of the cake before making his way to the courtroom for his trial.

Around the same time, some of Najib’s supporters were standing by outside the courtroom with some food and beverages to celebrate his birthday.

However, the police did not allow the birthday celebration to be held outside the courtroom, which prompted his supporters to move the party elsewhere.

The Pekan member of parliament is facing seven charges — three for criminal breach of trust, one for abuse of power and three for money laundering — involving RM42 million of SRC’s funds.

Earlier in the morning, Najib withdrew his appeal to strike out seven charges in the Court of Appeal, Putrajaya on the grounds that the trial before the High Court had gone to an advanced stage and the appeal was no longer appropriate.

Najib filed the appeal after the High Court on April 29 dismissed his application to strike out the seven charges on the grounds they were defective and constituted an abuse of court process.

High Court Judge Mohd Nazlan Mohd Ghazali ruled that there was no ambiguity in the charges against Najib and that the prosecution was entitled to frame the charges as they were.

One of Najib’s counsels, Muhammad Farhan Muhammad Shafee, informed the Court of Appeal that the defence filed the notice of discontinuance of the appeal yesterday.

To date, a total of 54 witnesses have testified in the ongoing trial, which is expected to run until Aug 15.