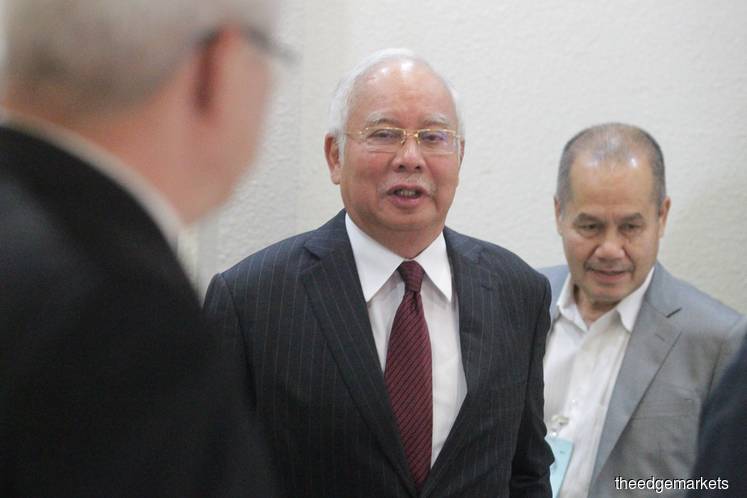 In hearing the application put forth by Najib's lawyers, Justice Collin Lawrence Sequerah ruled that the defence be given access to the documents, which are currently being held by the Malaysian Anti-Corruption Commission (MACC).

Lead prosecutor Datuk Seri Gopal Sri Ram then told the court that the prosecution will ask MACC to hand over a thumbdrive containing the documents to the defence in three weeks.

The documents were affirmed by MACC deputy chief commissioner Datuk Seri Azam Baki in an affidavit to the application that was filed at the High Court on Nov 20.

Lawyer Al Firdaus Shahrul Naing told Justice Sequerah today that the documents will support the defence of his client as they are crucial in showing that PSI executives Tarek Obaid and Patrick Mahony, and Low Taek Jho, or Jho Low, had schemed behind Najib's back.

Firdaus told the court that the defence was at a disadvantage as news outlets like Sarawak Report and The Edge had access to these documents.

"We are at the mercy of Clare Rewcastle-Brown (Sarawak Report) and The Edge to piece together the documents," he said.

Of the 17,000 documents, the defence claimed it had asked witnesses about a document labelled IDD 291 which was an email between Obaid and Mahoney. The email in question was published by The Edge in 2018 in a report titled: Cover Story: How PetroSaudi executives plotted what to tell Najib.

"We clearly see that this is linked to the defence of my client, therefore the documents are indeed relevant," Firdaus argued.

Sri Ram, however, argued that the defence was making the application purely on the basis of hearsay from the likes of The Edge and Sarawak Report.

"The lynchpin of their argument emanated from The Edge (and Sarawak Report). They are relying on hearsay and the fact that it was produced under affidavit (Azam Baki's affidavit) is no different," he said.

Sri Ram also accused the defence of going on a fishing expedition and surmised that the defence's application is premature.

"This is a premature application, they should file it when (and if) they are asked to enter their defence, it is then that your lordship can use discretion in deciding to allow the application," he said.

He argued that if the documents were allowed at this point of time, it would still remain as hearsay evidence as the defence would not be able to call witnesses to verify them, as the prosecution is still presenting its case at the moment.

Justice Sequerah then ruled that the documents do exist and are with the MACC, thus ruling out the argument of hearsay from the prosecution.

He also surmised that the public interest would not suffer and that this application was not in the nature of a fishing expedition as the documents are relevant for the applicant and his defence.

Justice Sequerah also said Najib's privilege can be reviewed by the court.

The judge also said Section 65 of the MACC Act, which protects the identity of informants, is not applicable in this case, as the MACC did not deny Justo’s identity.

The prosecution had earlier argued that Section 124 of the Evidence Act stipulates that no public officer shall be compelled to disclose communications made to him in official confidence when he considers that the public interest would suffer by the disclosure.

It provides that the court may require the head of the department of the officer to certify in writing whether or not such disclosure would be detrimental to the public interest and, if the head of the department certifies that such disclosure would not be prejudicial to the public interest, then the officer shall disclose the communications.

“I do not find anything to substantiate that public interest will suffer from such a disclosure.

“The type of documents sought have been sufficiently identified and categorised by the defence. It is not in the nature of a fishing expedition.

“I find sufficient basis that material sought for are relevant to the defence,” he said when reading out his reasoning for his decision.

Justo went to meet the MACC in Putrajaya on May 24 last year, and on June 26, 2018, he was interviewed by the commission, to whom he surrendered a thumbdrive containing the documents.

The Swiss national was the whistleblower who in February 2015 gave documents related to PSI to The Edge and Sarawak Report, which helped in the 1MDB exposés.

Najib is facing four charges of abuse of power and 21 charges of money laundering in relation to RM2.28 billion of 1MDB funds.