Nail-biting falls in ringgit and KLCI 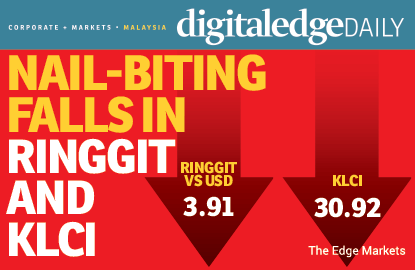 KUALA LUMPUR: It was a bad day for the local financial market. Yesterday, Malaysians saw the sharp fall of the stock market and the ringgit.

The local currency fell past the 3.90 level against the US dollar yesterday for the first time in nearly 17 years, despite an unexpected boost in June’s trade surplus. Meanwhile, the FBM KLCI slid 30.92 points or 1.79% to settle at 1,694.64 points – the lowest closing since June 29.

The ringgit closed at 3.9125 against the greenback yesterday, the lowest level since Sept 2, 1998, a day before the Malaysian government pegged the ringgit to the US dollar when the country was grappling with the Asian financial crisis.

The international reserve, which will be revealed today, is now the centre of attention, besides the political uncertainties that have caused a jittery investment sentiment. Mounting concerns that the central bank’s foreign exchange  (forex) reserve would shrink below US$100 billion rocked financial markets yesterday.

Citi Research anticipates that the country’s international reserve for July will fall below the US$100 billion mark. “In the unlikely event that FX reserves stay above US$100 billion, this may indicate repatriation of offshore assets held by GLCs (goverment-linked companies) to shore up reserves,” the research unit commented in a note yesterday.

In its weekly fund report on Monday, MIDF Research said foreign investors have now been net sellers on Bursa Malaysia for 14 consecutive weeks, the longest stretch of back-to-back weekly selldowns since the 2008 financial crisis.

Macquarie Bank Ltd’s forex and fixed-income strategy head Nizam Idris reportedly told Reuters that the market is also anxious because Bank Negara Malaysia’s reserves are expected to fall below the psychological level of US$100 billion as the central bank is widely speculated to be intervening to stem the decline of the ringgit.

Bank Negara had revealed on July 23 that its international reserves amounted to RM379.4 billion (US$97.5 billion) as at July 15, and is sufficient to finance 7.9 months of retained imports and is 1.1 times the short-term external debt.

In a report, BCA Research said Bank Negara’s decision to control interest rates rather than the exchange rate will pose further downside risks to the ringgit.

BCA Research noted that the weakening commodity prices and large outflows of funds have forced the central bank to face the dilemma of having to either defend the exchange rate or maintain control over interest rates.

“So far, the monetary authorities have chosen to control interest rates, that is, prevent rates from spiking,” it added.

When contacted yesterday, Hong Leong Investment Bank Bhd economist Sia Ket Ee declined to comment on whether the ringgit would decline past 4.0 against the US dollar.

However, Sia said there are no short-term catalysts to support a reversal of the ringgit’s decline, despite positive export data in June, as the strengthening US dollar is the main contributor to the ringgit’s weakness.

“We are seeing broad-based hoarding of the US dollar in the economy,” he said. “Business sectors are not the only ones in the game (of hoarding the US dollar), households are also into it.”

“The trade surplus we have seen is only on paper. It depends on whether exporters repatriate the proceeds (from the trade surplus) back into the economy and change it to the ringgit,” said Sia.

He said that the strengthening US dollar on expectations of an interest rate hike by the US Federal Reserve, weak commodity prices, poor sentiment, weakening confidence in the domestic market as well as ongoing political issues are the main factors behind the weakening ringgit.

Also, an oil surplus in the global market, slow growth of China’s economy, and the high outflow of funds from Malaysia will not abate soon.

This article first appeared in digitaledge Daily, on August 7, 2015.