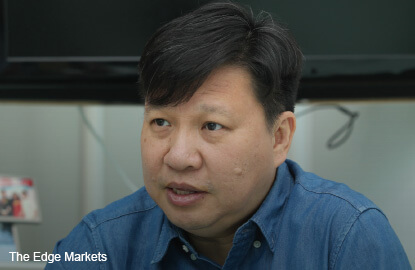 +A
This article first appeared in The Edge Financial Daily, on November 28, 2016.

KUALA LUMPUR: Stepping into the N2N Tower in Bangsar South, one is greeted by share trading terminals displaying live information from Bursa Malaysia by the lift. The same terminals are displayed prominently in N2N Connect Bhd’s head office on the ninth floor.

But don’t be mistaken. This ACE-market listed company is no brokerage firm, but the provider of the TCPro brand of trading terminals used by nearly 70% of investment banks and brokerage firms in Malaysia.

However, having cornered 70% of the market doesn’t mean N2N managing director Andrew Tiang Boon Hwa (pic) is comfortably resting on his laurels. For he has bigger plans in store for the company.

“We have a Pan Asia expansion plan, which includes countries like Hong Kong, Australia and Japan, and we intend to expand into these markets within the next three years.

“We plan to deliver to these countries a similar kind of service that we provide in Malaysia. Once we have [conquered them], we will proceed with our global expansion,” he told The Edge Financial Daily in a recent interview.

Besides Malaysia, N2N is currently present in Singapore, Indonesia and the Philippines.

AFE is a financial data and trading solutions provider with regional presence in Hong Kong, Macau and Vietnam.

“The financial market in Hong Kong is huge with over 500 brokerage firms. AFE is among the top three [trading solutions] providers there. We bought AFE for their market share. Through AFE, we will have a good presence in Hong Kong, Macau and Vietnam.

As for Australia, Tiang said the group has already incorporated a company there. “We haven’t [locked in] any clients in Australia, but we have already obtained certifications from both the Australian Stock Exchange and the Chi-X [Australia],” he said.

In July 2014, N2N inked a business alliance agreement with Japan-based Nikkei Inc and QUICK Corp. Media company Nikkei and financial information provider QUICK are both N2N substantial shareholders, with a 14% stake each.

Via the partnership, N2N will establish new terminal services incorporating software owned by QUICK, while distributing news from Nikkei through the terminals.

“QUICK operates like Bloomberg and Reuters, but in the Japanese language. So our partnership with Nikkei and QUICK is to establish an international version of [the terminal] that is able to [reach] Asian markets outside [of] Japan,” said Tiang. The international version will be available in multilanguages, including English.

The group is also looking to expand into South Korea and Taiwan.

“We are already in talks with some Korean companies. If things come together, probably in the next 12 to 18 months, [we will have] something. The next stop will then be Taiwan and this would complete our Pan Asian strategy,” said Tiang.

N2N’s geographical expansion doesn’t appear too daunting, at least not financially, considering the group had a comfortable net cash and cash equivalents of RM104.7 million as at Sept 2016.

Besides its Pan Asian strategy, N2N is also hoping its new product offerings and a new customer segment would drive revenue contribution for its financial year ending Dec 31, 2017 (FY17).

“Currently, we [provide platforms for] online trading, institutional trading and proprietary trading, and we are going to expand to buy-side trading in FY17, which is the fund managers [segment]; these are all part of the front-end services that we provide.

The group also hopes contribution from its new low-latency system will enhance it FY17 earnings.

“Our current systems, I emphasise, are already fast, but our new low-latency system [is expected] to be three to five times faster than [our current] system. We believe it will be a game changer.

“Five of our customers are currently undergoing user acceptance testing for the new system; any potential revenue generated will be in FY17,” he said.

Simply put, latency is the time taken to send a unit of data between two points in a network. Thus, the lower the latency means the shorter the time needed. In trading, microseconds can mean the difference between winning and losing, so the lower latency ensures a trade can be executed successfully before the competition.

In the nine months ended Sept 30, 2016 (9MFY16), N2N reported a 30% rise in net profit to RM9.16 million from RM7.06 million a year ago on higher revenue and positive fair value changes on financial assets held through profit or loss.

Revenue for 9MFY16 came in 8% higher at RM31.29 million from RM29.09 million, on higher monthly subscriptions.

“For FY16, we expect to do better [revenue-wise] due to a higher [number of] customers,” said Tiang.

N2N shares have been trading downwards since hitting a year’s high of RM1.01 on Jan 15. It closed unchanged at 80 sen last Friday, valuing it at RM373.44 million.

Tiang and his wife, N2N executive director Jovelyn Lai Su Ping, control some 35% of the company via their interest in N2N Connect Holdings Sdn Bhd, and their respective personal stakes.