MySay: Why asia should worry about Middle East risks 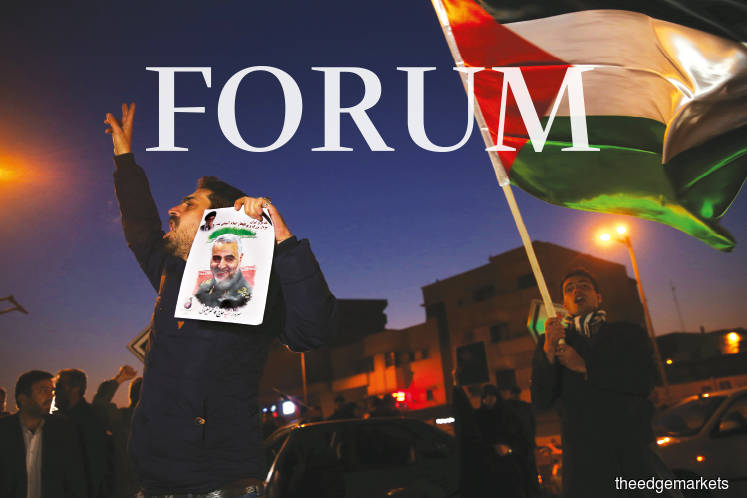 The new year began with shocking developments in the Middle East. While financial markets have corrected, the response to the clashes between the US and Iran has been relatively muted, perhaps because investors are assuming that there is only a limited chance that the clashes would spiral into an expanded conflict. However, I believe that such a view is a tad complacent. The escalating tensions between the US and Iran in recent days mark a steep increase in political risks, and the Asian region will not be spared its implications.

First, the assassination by American forces of Iranian Revolutionary Guards Commander General Qassem Soleimani marks a decisive turning point in how states conduct themselves. Countries generally avoid the highly provocative act of killing a senior political or military leader of another country. And for good reason, since such actions would tend to invite tit-for-tat retaliation. If it now appears that the US has upended this norm, other powerful nations may also feel that they can undertake similar attacks — if they can get away with it — and eventually, no one would be safe.

Second, a dynamic of escalation has set in. Iran has retaliated by unleashing ballistic missiles on two American military bases in Iraq — the first time that Iran has so directly launched a military attack on the US. America will almost certainly hit back at Iran. Iran’s Supreme Leader, Ali Khamanei, has endorsed the missile attacks. Hinting at further offensives, he said:

“Military action of this kind is not enough. What is important is that the corrupt presence of the US should come to an end.” The Islamic Revolutionary Guard Corps warned that countries in the region that have provided bases to the US will also be targeted.

The Iranians may have decided that since they had little choice but to strike back at the US, they should do so with strategic objectives in mind. This is to demonstrate that it can inflict pain on the US so as to deter further US aggression, while also showing the rest of the region that it is no pushover. A third aim seems to be to force America’s allies in the region to stop offering bases to the US military. It looks like Iran is willing to risk punishing American bombardments on its cities and military

installations in pursuit of these objectives. The Iranians would be encouraged by the fact that its attacks on Saudi Arabian oil fields last year had prompted Saudi Arabia and the United Arab Emirates to initiate exploratory discussions with Iran on improving ties. Moreover, Iraq’s parliament has just passed a non-binding resolution requiring an end to the American military presence in Iraq.

In other words, it was not correct to assume that escalation risks were limited because both sides did not seek an all-out conflict. Iran is clearly prepared to threaten the US even knowing that overwhelming American firepower could cause massive damage to their country. Remember that Iran has shown itself to be willing and able to sustain immense pain to protect its sovereignty — as seen in the 1980 to 1988 Iran-Iraq war, and in its ability so far to withstand the considerable damage caused by US sanctions. Moreover, the Iranian regime’s hardliners have been significantly bolstered by the killing of General Soleimani and now hold more sway over national policy than its moderate president and his allies.

If Iran’s leaders are serious when they said that Tuesday’s missile attacks are “not enough”, there are several other actions they could undertake to further their objective of pushing the US out of the region. To raise the costs to the US of engaging in the Middle East, they could mount more missile and other attacks on US bases in the region, as well as harass shipments of oil through the Straits of Hormuz, through which more than 30% of the world’s traded oil is shipped. Iran’s partners around the region, such as

Hezbollah in Lebanon, could also attack US allies in the region, such as Israel and Saudi Arabia. Another attack on Saudi oil facilities seems less likely but cannot be ruled out. We could see terrorist attacks, as well, on Americans and Israelis in the coming months.

I therefore expect more clashes between the US and Iran. Eventually, both sides will reach a pause and the confrontation will subside but not end. The region will remain on edge and there are likely to be occasional episodes where one side might attack the other.

Implications for global and Asian economies

In other words, either as a result of more attacks on US military bases in the region or because of another attack on Saudi oil production or by interdicting oil shipments through the Straits of Hormuz, there will be enough mayhem to raise the risk premium in oil prices. Fortunately for the world economy, the Organisation of Petroleum Exporting Countries and Russia between them have spare capacity of around 3.3 million barrels of oil a day, or about 3% of global oil consumption. That would be enough to prevent a sharp spike in oil prices arising out of a higher risk premium, but not sufficient if a large chunk of Saudi oil production were to be taken out for a prolonged time or if shipping oil through the Hormuz Straits became difficult.

One impact of this scenario would be as follows:

•    If there is no prolonged dislocation in Saudi oil production and oil prices remain below US$90 per barrel, it is unlikely that oil prices would set back global growth substantially. I believe that the on­going modest recovery in global economic activity can continue.

•    If so, oil prices are unlikely to rise sufficiently to cause a serious rise in world inflation.

•    However, some countries could see a worsening in their current account deficits. In Asia, India and Indonesia could be affected. Both these countries also still have fuel subsidies so they could suffer a somewhat more difficult fiscal position.

A second channel of impact would be through global business confidence being damaged as expanding confrontations in the Middle East generate anxiety about the future. So far, while there have been incipient signs of a recovery in global demand, there have been few indications that capital spending is turning up substantially, suggesting that companies remain hesitant. Now that reluctance to expand could worsen. If so, that would delay even further the rebound in capital spending, which is an important driver of exports of manufactured goods in this region — South Korea, Taiwan, Singapore, Malaysia and Thailand would be big losers, in addition to China and Japan.

Of course, it is possible that capital spending in the oil sector might revive as higher oil prices encourage more exploration and development of oil and gas fields. With higher prices, there is more of an incentive to invest in facilities to improve yields in declining fields such as those in the North Sea and in developing expensive new fields such as those that have been recently discovered off Guyana. But outside some offshore and marine-related exporters, Asia’s trade-­dependent economies are not hugely dependent on oil-related capital spending, so the net effect of oil prices on capital spending and then on export demand in Asia is still likely to be negative.

While the economic consequences for our region may not be so dire, the political effects are more concerning.

First, with the killing by the US of a senior leader of another country, the norms that restrained offensive behaviour and so helped maintain stability have been undermined. With that line now crossed, what is there to stop big powers such as China or Russia or even middle powers feeling emboldened to take out troublesome political leaders in countries they have problems with?  This breakdown of conventions of inter-state behaviour that were needed to reduce the scale of potential conflicts makes for a more dangerous world. And that is certainly bad news for the smaller and less powerful countries in Asia.

Second, it is quite likely that America’s strategic bandwidth as well as its military resources will be absorbed by conflicts in the Middle East. This will give its rivals such as China, Russia or North Korea, an opening to more aggressively push their agendas in ways that could prove to be destabilising.

Take the Korean peninsula as an example. As the new year began, North Korea’s leader Kim Jong Un unveiled plans to accelerate his country’s nuclear programme and introduce a “new strategic weapon”. Kim proclaimed that there were no more reasons to abide by North Korea’s own moratorium on nuclear tests and development of intercontinental ballistic missiles (ICBMs). He could find an opportunity to push ahead with these provocative plans such as testing an ICBM, calculating that the US administration would not want to take on both Iran and North Korea at the same time. Would China take advantage of America’s eyes being diverted from Asia to make a bolder push in the South China Sea? Note that Indonesia and China have been embroiled since New Year’s Day in a tense stand-off near the Natunas after a large number of Chinese fishing vessels accompanied by Chinese coast guard ships encroached into Indonesia’s exclusive economic zone.

Third, as the US and Iran face off against each other, they have suspended their operations against their common foe, Islamic State and Al Qaeda. Recent months have seen indications that Islamic State (IS) and affiliated terrorist groups were regrouping in Iraq and Syria. Many IS fugitives are believed to have returned to Southeast Asia following their defeat in Syria and Iraq. With their most effective protagonists turning on each other, IS would now have more space to rebuild their networks to a point where they could mount more terrorist attacks. Indonesia and the southern Philippines could be at risk as a result. Note that

Somalia’s Al Shabab has already attacked a US base in Kenya, killing three Americans, after the killing of Soleimani even though Al Shabab is affiliated, not with Iran but with IS. Expect more such terrorism in future.

While the clashes between the US and Iran are unlikely to expand into an outright war, there will be enough trouble to cause oil prices to rise and to damage global business confidence. The impact on economic growth in the world may not be substantial, though, so long as there is no prolonged damage to oil production. However, we are now in a much more dangerous world politically.