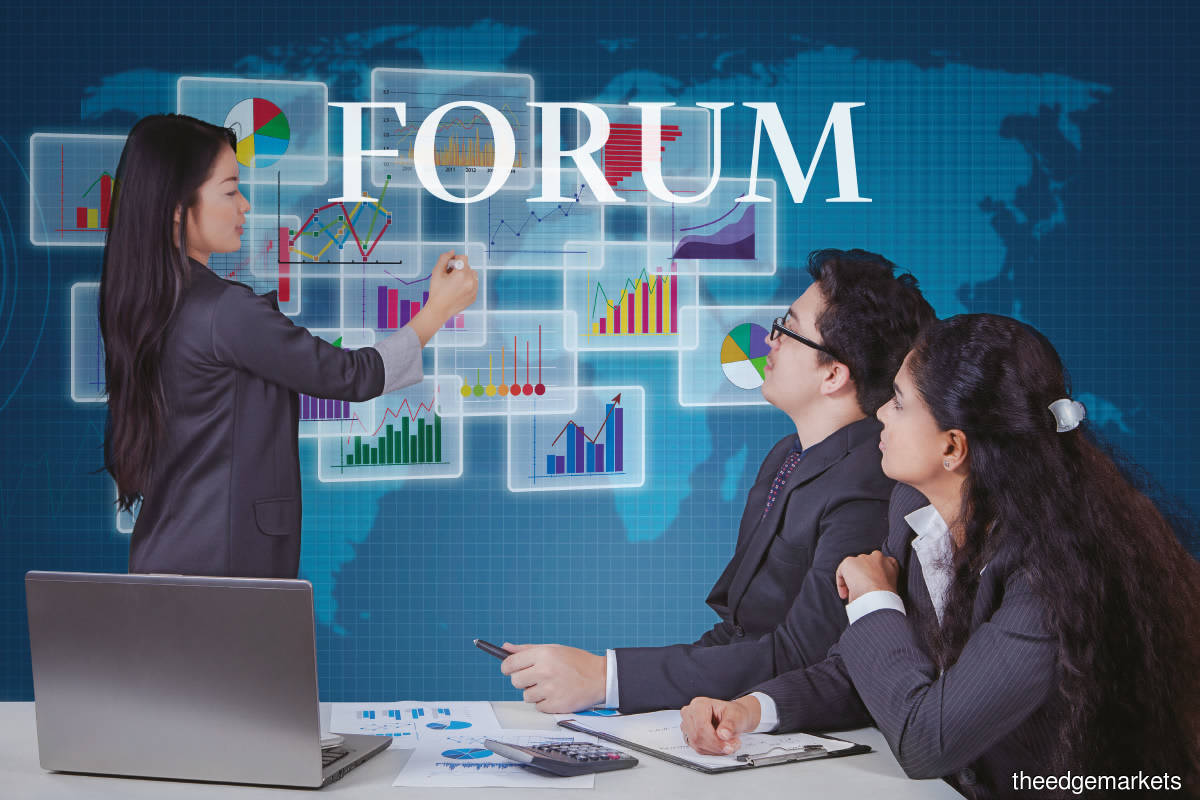 A major structural issue in Malaysia is the low level of female labour force participation rate (LFPR) despite their higher educational attainment, and the high level of attrition of women in the workplace. Improving LFPR for women, which will expand economic capacity and contribute to higher household income, should be a policy priority.

"Malaysia’s political sentiments that are predominantly coloured by race and religion need to change if we are to make any progress. There are serious issues: worsening inequality and youth unemployment, persistent gender inequalities, increasingly sticky intergenerational upward mobility, loss of national competitiveness and, of course, a tenuous national unity — all of which require vigorous debate and our collective strength to overcome. We cannot resolve any of these issues if the racial lenses are not removed.”

US President Joe Biden hit the ground sprinting and used his slim majority in Congress to sign into law a landmark legislation earlier this month. The US$1.9 trillion Covid-19 relief bill — the American Rescue Plan — was not just a bill that cast a very wide social safety net for those affected by the year-long pandemic, it was government policy and a political tool that attempted to redefine what the government could do at critical junctures of a nation’s history. It was the start of a much larger agenda.

Biden obviously does not look at the pandemic as an economic crisis the way the 2008 global financial crisis was an economic crisis. He looks at this pandemic the way the Great Depression of 1933 was a crisis and how Franklin Roosevelt responded with the New Deal, not just to address the dislocations of the economic recession but also to put in place the building blocks that saw the US become the superpower that it was at the end of World War II.

Later, at the height of the Cold War and following the assassination of John F Kennedy in 1963, and with the Vietnam War and civil rights movement heating up, Lyndon Johnson, the vice-president who assumed the US presidency, embarked on his Great Society — an ambitious set of reforms to address racial discrimination and inequality, eradicate poverty and address environmental degradation.

Both Democratic presidents redefined American politics by changing the political landscape through their policies. It was not until Ronald Reagan in 1981 that the Republican party gained a national foothold, but it was also the start of partisanship that paralysed US politics. While the US prevailed over the Soviet Union when the Berlin Wall fell in 1989, the US was much less successful dealing with the negative consequences of economic globalisation at home. Its industrial midwestern states were hollowed out as the coastal states benefited and grew from the advent of technology and trade. The gap between winners and losers widened and weak ineffective governments, driven more by the rhetoric of ideology and identity, made it worse.

Biden is audacious in attempting to show that the government can be functional and that those left behind and neglected by politicians selling sentiments instead of policies — even if they are sceptical of the government or opposed him — will benefit from his policies. Those making less than US$25,000 a year, about a third of median income, will see their income increase by about 20% from the various transfer programmes and childhood poverty will be reduced by more than half.

The bill also broadened the reach of programmes to the middle class, an acknowledgement of the inequality in that economic growth has not benefited most Americans. Some 70% of the tax benefits, for example, go to those making less than US$90,000 annually, which is 30% higher than the median income.

As with Roosevelt’s New Deal and Johnson’s Great Society, there will be a series of other major initiatives. The Covid-19 relief bill is just the beginning. The next major initiative, one that has been discussed since Barack Obama’s presidency, is the much-needed infrastructure overhaul that builds capacity and capabilities for the future economy based on new technologies and that addresses a digitised post-carbon world.

The fiscal response of the world’s major economies has been massive. The severity of the economic consequences of the pandemic can be seen by how the fiscal responses dwarfed that during the 2008 global financial crisis. While it was in the range of 1.5% to 3% of GDP in 2008, this time around governments have responded by instituting stimulus packages in excess of 10% of GDP, with Germany and Japan exceeding 30% and 20% of GDP respectively. The US response — both the Trump administration’s and Biden’s — is now at about US$6 trillion, or some 28% of pre-Covid-19 GDP. The US will likely escape the low-inflation and low-growth trap that Japan and most of Europe have been in for decades now.

The lessons for Malaysia are obvious. In many ways, one sees facets of Malaysia in the US experience, albeit in some twisted manner. The white majority that dominates the economy and politics are increasingly insecure at the changing demographics and the imminent prospect of a white minority America. This fear, especially among whites displaced over the years by globalisation — loss of jobs as American companies moved offshore or became uncompetitive — forms the support for politics that benefit the rich and big businesses instead.

Over here, the Malay majority that dominates politics but is lagging economically is increasingly insecure despite becoming more dominant demographically. There, as here, the ruling elites propagate this false sense of fear to preserve political power but oversee ineffective governments that are detrimental to the majority of the very constituencies they purport to represent. These are rather perverse outcomes of identity-based politics, but it is a reality that has to be confronted.

Malaysia’s political sentiments that are predominantly coloured by race and religion need to change if we are to make any progress. There are serious issues: worsening inequality and youth unemployment, persistent gender inequalities, increasingly sticky intergenerational upward mobility, loss of national competitiveness and, of course, a tenuous national unity — all of which require vigorous debate and our collective strength to overcome.

We cannot resolve any of these issues if the racial lenses are not removed. It is obvious that an economically sub-optimal policy framework that always seeks second best solutions will quickly find itself on a path towards mediocrity. That has happened to many public institutions in the country and one of the most urgent agenda is to rebuild and enhance these institutions.

Malaysia’s Covid-19 response thus far has been earnest but lacks coherence and therefore, a much broader ambition. Much of it has been short term in perspective, a necessary focus to be sure, but lacking both transformative initiatives for firms as well as how the government conducts fiscal policy.

It could have taken the opportunity when providing relief to those affected by the pandemic to redefine the overall social safety net programmes and, by extension, reforming parts of the civil service delivery system as well. It could reprioritise the target groups of such policy and sharpen policy tools themselves. The use of taxation policies instead of the expenditure side to incentivise firms with fiscal incentives to invest or spend in particular ways should be more prevalent.

A major structural issue in Malaysia is the low level of female labour force participation rate (LFPR) despite their higher educational attainment, and the high level of attrition of women in the workplace. Improving LFPR for women, which will expand economic capacity and contribute to higher household income, should be a policy priority.

This is directly related to the policy on children, from ensuring a sufficient diet for them to making available proper childcare at the workplace — a main reason why working mothers exit the labour force. Much more resources have to be allocated here. It was not something emphasised in the Covid-19-related packages despite women bearing the brunt of the pandemic, hence the need to thoroughly review and reform all existing programmes.

The high youth unemployment is another serious issue that requires deeper thinking. The government has already spent on the supply side of this equation; unemployment can be due to the lack of aggregate demand or the absence of demand altogether for these resources, in which case, it is a supply quality issue.

This goes back to the agenda on institutional reforms. If it is the lack of aggregate demand, then the immediate focus should be on breaking new ground to support new industries, be they related to the conservation and sustainability agenda or food for example. It must also involve manufacturing of some sort as the much-touted services-oriented knowledge industries do not really create many jobs and do not have the extensive value chains that manufacturing does.

Finally, a few words on the revenue side of public finance. Government revenue as a percentage of GDP has been declining and the level of public debt has been rising, which is clearly an unsustainable trajectory. Increasing taxes at this juncture is a dampener for the recovery, but broadening the reach of the existing tax structure is an option that should be pursued.

As with women’s LFPR, formalising the sizeable grey economy should also be a high priority. The much maligned and poorly implemented Goods and Services Tax was a tool to do exactly that and warrants a serious look again.

Biden rose above partisanship to put the country’s interests ahead of anything else. It is about seizing the moment to do the right things at the right time, just like how a politician from the American South like Johnson spearheaded the civil rights movement in the US. Political leaders are remembered for when they strive to make things better for others, not when they seek self-preservation. It is not even about whether they are successful at it. It is about doing the right things at the right time.