MySay: How will the novel coronavirus affect the economy? 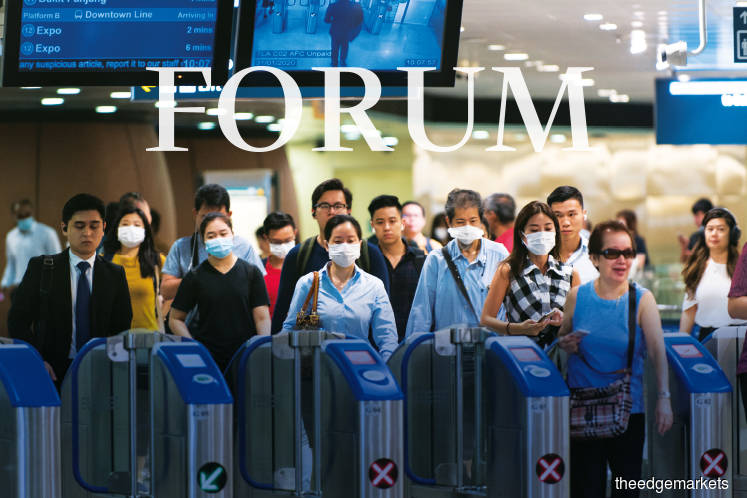 There is growing alarm over the spread of the novel coronavirus (2019-nCoV), whose first confirmed case was reported in China’s Wuhan city. The population of infected patients continues to grow as more evidence of community spread outside China emerges. Officials across the world are reacting with radical measures, including banning travellers from China from entering their countries. Worried ordinary folk are donning face masks and, to avoid crowded areas, are cutting back on shopping and entertainment. As concerns that global economic growth could falter widen, commodity prices have corrected and financial markets have swooned.

But, this alarm may be an over-reaction. Our read of the hard evidence is that: (i) Although the virus seems to spread more easily than SARS, it has a much lower fatality rate than SARS or MERS, whose fatality rate is even higher than SARS; (ii) While the number of infections will certainly grow in the coming days, current efforts are likely to bring its geographic spread and the number of infections under control within the next few weeks; (iii) the bulk of the direct economic damage will be to the Chinese economy, with indirect but manageable spillovers into China’s economic partners; and (iv) the support measures that the Chinese authorities and governments elsewhere are deploying are likely to mitigate the worst economic impacts of the epidemic.

One reason for the alarm is that there are plenty of known unknowns: Will the virus mutate? Could the Chinese authorities’ containment efforts have been too little and too late? Can infected patients with no symptoms really spread the disease? Moreover, countries such as Cambodia and Laos with close ties with China seem to be reporting no cases, which raises concerns of under-reporting.

But we can only base our views on what is known, and on the hard facts. If we do so, the Wuhan virus turns out not to be so scary. In fact, the evidence suggests that the novel coronavirus has more in common with the seasonal flu rather than SARS and MERS.

First, the estimated fatality rate associated with the novel coronavirus has more than halved since the start of the crisis and is now around 2%. Compare that with the SARS fatality rate of around 10% and MERS fatality rate of around 34%. It is the elderly or those with existing illnesses who are most at risk, with hardly any deaths among the young, many of whom suffer fairly benign symptoms. Meanwhile, there have been only two deaths outside China and there has been rapid progress in devising medications and treatment regimes for the victims, not seen in previous outbreaks.

Second, while the novel coronavirus is spreading across the world, the geographic spread is likely to slow as countermeasures kick in. Hong Kong and the rest of Asia have reported more cases and a couple of deaths but in general the news outside China so far is encouraging. Within China, the number of victims is growing rapidly, but even here the speed of increase is slowing and most new cases are overwhelmingly in Hubei province. In fact, governments have reacted quickly and sometimes quite harshly to restrict the geographic spread of the virus. The US, Hong Kong, Taiwan, Singapore, Australia and Indonesia, among many others, have placed tough restrictions on travellers from China. Strict screening of all travellers entering countries has been implemented.

Third, many countries, including China, Thailand and Australia, are making rapid progress in working out effective treatment of the disease, making it likely that the fatality rate will fall further in time.

As of now, it therefore looks like the danger posed by the virus is manageable, its geographic spread can be contained within the next few weeks and effective treatments are likely to assuage public fears. If this is indeed the case, then the factors that hurt economic activity, such as tough government measures restricting travel, businesses suspending operations and the behaviour of scared consumers, should not last long, thus moderating the economic damage posed by the virus.

China’s economy to bear most of the damage

The Chinese economy will certainly slow drastically in the first quarter of this year. The Lunar New Year holidays have been extended so factories and shops will resume operations on average two to four weeks later than normal. Even after commercial operations resume, they are likely to be on a reduced scale, given many companies are encouraging their staff to work from home, for instance. It will take time for people to overcome their fear and return to normal spending and travel routines.

Tourism, transport and retail sector activities have slowed dramatically all over urban China. For example, daily passenger traffic on China’s railways has plunged by more than 70% during the Lunar New Year compared with last year. With so much uncertainty, companies are cutting back on employment, with small and medium enterprises placing workers on unpaid leave, despite government strictures not to do so. Some economists estimate that the virus outbreak has imposed costs of more than RMB1 trillion (RM590 billion) on the restaurant, tourism and movie industries in the first seven days of the Lunar New Year holiday.

But China’s economic managers are determined to protect the economy from a sharp downturn. They know that the abrupt and unexpected nature of this shock could crystallise existing vulnerabilities in the financial system. So the central bank has injected a massive RMB1.2 trillion into the financial system while also cutting some interest rates. Regulators are persuading financial institutions to keep lending to vulnerable segments of the economy and are adopting measures to reduce risks. For instance, China’s regulators will extend the grace period for companies to comply with strict new rules for asset management companies which could have tightened liquidity. Measures to support the small and medium enterprises that are the heart and guts of the economy are being announced. An example is the package introduced by the Suzhou local government which is likely to be mimicked by other local governments. Among the array of support measures extended to firms, those that avoid job cuts will be given a rebate of 50% on their unemployment insurance contributions while current social security contributions that are due can be delayed by six months for companies in difficulty.

Taking all this into consideration, our guess is that China’s economic growth may fall from around 6% in the final quarter of 2019 to around 3% to 4% in the first quarter of this year: that is bad but not a disaster nor is it a recession. Economic weakness will still linger on into 2Q2020 but growth will then accelerate earnestly in the second half of the year as pent-up demand is released and further stimulus measures which we think will be announced by the central government take effect. For 2020 as a whole, economic growth may be closer to 5.5% rather than the 5.8% we originally expected.

China’s footprint in the global economy has expanded massively since the 2003 SARS epidemic. Its share of world GDP today is around 16%, compared with a quarter of that in 2003, while it consumes about 10% of total global imports. When China sneezes, the rest of the world will be shaken up a lot more than before.

The main and immediate channel by which Asian growth will be affected is via a pullback in tourism inflows. Outbound tourist flows from China are today eight times bigger then in 2003 and most of that has gone to China’s neighbours. Thus, the countries in the region with close tourism dependence on China will be the most affected. Hong Kong, Taiwan, Thailand, Malaysia, Singapore and Vietnam will be buffeted quite severely. Air transport,

hospitality and food and beverage-related activities will slow.

Supply chains in the manufacturing sector will also face some disruptions. As recent unexpected disasters showed — such as the Japanese earthquake of 2011 and the widespread floods in Thailand soon after — these supply chains are complex, making the global economy highly dependent on particular nodes of manufacturing. China sits at the heart of these supply chains, so the delayed restart of production activities after China’s Lunar New Year celebrations will slow the flow of needed intermediate goods from Chinese factories to other parts of the supply chain while also reducing demand from Chinese factories for components. Several manufacturing hubs critical to the global technology supply chain, such as Shanghai, Guangdong, Jiangsu and Chongqing, announced extensions to the Lunar New Year holiday because of the virus. Taiwan, South Korea, Singapore,

Malaysia, Vietnam and Thailand will be hurt. We will soon see export orders reported in purchasing manager surveys for this month registering sharp declines.

But there will also be some offsets.

Automatic stabilisers are kicking in as bond yields have fallen and moderately weaker Asian currencies, which co-move with the renminbi improve export competitiveness. Asian policymakers are also responding with more support measures: there is room for more interest rate cuts across the region. In Singapore, for instance, government leaders have indicated that the forthcoming budget will extend help to the sectors that are hurt the most. Moreover, it looks like the US economy remains on a solid footing. The latest purchasing manager survey for the American manufacturing sector showed a surge in factory activity there, including a spike in import orders that should flow through to greater demand for Asian manufactured goods.

Beyond the immediate impact of the virus crisis, there will be longer term implications.

First, a weakened Chinese economy will struggle to deliver on its promise to purchase an extra US$200 billion of US goods under the phase one trade deal it just signed with the US. Such a massive increase in Chinese imports always looked a bit difficult to engineer — now it looks impossible. This could mean more US-China trade frictions as a result.

Second, with China being the epicentre of SARS in 2003, and now of the novel coronavirus, even more companies may seek to relocate production out of China because of fears, mistaken or otherwise, that China has a higher risk of epidemiological crises (on top of trade and geostrategic tensions with the US). Note that Ftech, a major car parts supplier for Honda, has announced that it would move its production of brake pedals from Wuhan to the Philippines due to disruptions from the coronavirus outbreak. More firms could yet follow suit as Hubei province, ground zero of the outbreak, is a major production hub for the global auto sector.

Third, some aspects of China’s management of the crisis have raised concerns over its governance system. It is not just Western media that is questioning the lack of transparency in China and the crackdowns on doctors who warned about the dangers posed by the virus before the epidemic became serious. Even the respected Caixin Daily has editorialised its concerns that lessons had not been adequately learnt from the SARS epidemic — it called for greater transparency. So far, the Chinese leadership has contained the political consequences of this lapse in governance and most ordinary folk blame local officials rather than the Beijing leadership. However, if the crisis is not brought under control quickly, there could well be a backlash against the central leadership.

While we have to be watchful, there is no need for alarm. Unless the novel coronavirus mutates, it is much less dangerous than other bugs. Its geographic spread will soon be contained and the economic dislocation caused will therefore be of limited duration. The Chinese economy will bear the brunt of the shock but most of the damage will be in the first quarter of the year, so long as China’s policymakers manage the economic consequences well. The rest of Asia will bear some pain as a result but the hit to growth will be manageable.