MySay: Alberto Alesina’s reunification of economics and politics and its relevance to Malaysia 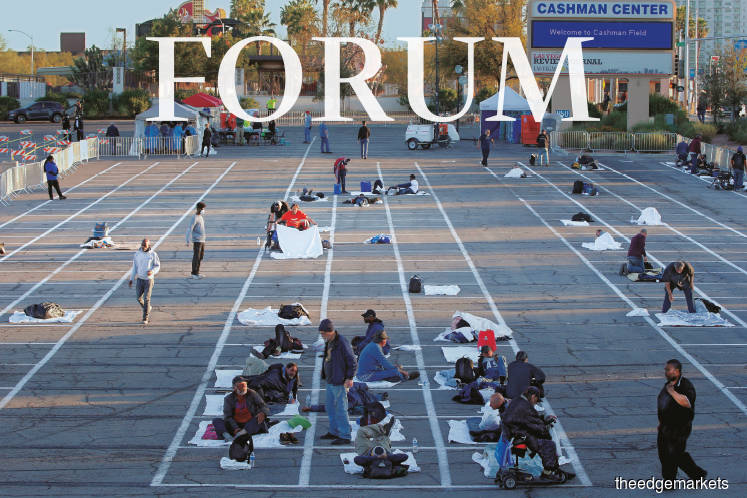 Homeless people in a temporary parking lot shelter in Las Vegas during the coronavirus outbreak ... More inequality is correlated with worse economic growth, Alesina wrote in a paper he co-authored with Dani Rodrick

The fields of economics and politics go hand in hand and cannot be separated, particularly when we consider current affairs and public policy. This is a statement that may seem obvious to everybody except economists. While the field of economics originally (and rightly) began as “political economy”, mainstream economics — especially in the US and other Western countries — has long divested itself of its pesky relative, political science.

Indeed, as Larry Summers, a Harvard economist puts it, “[In the 1980s], there were a few economists interested in understanding politics rather than telling politicians what to do. And there were a few political scientists interested in economic issues. But there was no academic field of political economy.” Fortunately, today, the academic field of political economy has made a resurgence and is at the forefront of cutting-edge social science research. A major part of this resurgence in the intersection between politics and economics is due to the recently departed Alberto Alesina.

Alesina was an Italian economist at Harvard University, and a pioneer in integrating the political science and economics camps. He died about two weeks ago on May 23, suffering a heart attack while on a hike with his wife. Since his death, tributes from his colleagues, collaborators, students and admirers have poured in, a testament to both his genius and warm personality. And, in doing so, it was a great reminder that the current field of political economy, at least within mainstream economics today, owes a great deal to Alesina. As Jeffrey Sachs, Alesina’s doctoral thesis adviser, puts it, “Alberto helped to restore the bridge of economics and politics that has been traditional and indeed fundamental since the birth of the field.”

The sheer volume of Alesina’s contributions to the field is too gargantuan to recount in a column such as this. In going through his work, however, it is evident that there is much that we can take and apply in our thinking on Malaysia’s political economy and, in particular, what we may consider for Malaysian public policy moving forward. I would like to highlight, here, three ideas from Alesina’s work that are of great relevance to Malaysia.

Alesina worked a lot on the topic of inequality, which is arguably Malaysia’s most prominent socioeconomic challenge today. In a 1994 paper co-authored with Dani Rodrik, Alesina documents that more inequality is correlated with worse economic growth. To explain the economic relationship between inequality and growth, the authors turn to politics. According to them, a more unequal society is more conducive to the adoption of growth-retarding policies.

This is because there will be a strong demand for redistributive policies in societies in which a large section of the population does not have access to the productive resources in the economy. Such redistributive policies tend to swing a nation away from investing in physical and human capital, and towards consumption, particularly of those who lack access to the economic machine.

After all, government finances are finite. What we should therefore see, in a society that is largely unequal, is an abundance of policies such as cash transfers and subsidies rather than policies that are growth-supportive. To be clear, social spending is necessary to ensure that all members of society are able to lead decent lives. But when too many in society are left behind by the economy, redistributive policies to support them — a band-aid to a much larger problem — will lead to negative economic growth moving forward.

The second idea builds on the first. Alesina spent a great amount of time thinking about the differences in preferences for redistributive policies between Americans and Europeans. Among his most important findings are that societies that have higher social mobility tend to be more averse to redistribution and, as such, social mobility and redistribution can be seen as potential substitutes for one another.

Furthermore, the impact of mobility on attitudes towards redistribution is affected by individual perceptions of fairness in the mobility process. For instance, people who believe that American society offers equal opportunities to all are more averse to redistribution in the face of increased mobility. On the other hand, those who see the social rat race as a biased process do not see social mobility as an alternative to redistributive policies.

Now, when we consider the case of Malaysia, if we accept that there is some merit to the idea that social mobility and redistributive policies can be substitutes for one another, then we need to ask the following question: Is the prominence of redistributive policies in Malaysia, such as cash transfers and subsidies, in large part due to a lack of social mobility in Malaysian society today? While Malaysia historically has had a history of social mobility, this is generally true of countries moving from low income to middle income. Where we are today, however, it is not so clear whether we have had the same level of mobility.

As such, the presence of such large expenditures of redistributive policies should tell us that we should perhaps be exploring the idea that Malaysia may be experiencing a growing lack of social mobility. This is disastrous for several reasons — it means future generations will find it increasingly difficult to be better off than present generations, hence the further growth of income and wealth inequality. Perhaps, as we consider the various economic plans coming out of Covid-19, significant attention should be paid to policies that boost social mobility, alongside policies that protect the lives and livelihoods of Malaysians.

The third idea is a call for greater unity. Alesina also gave great attention to the topic of ethnic fractionalisation and its effects on society. Specifically, he found that, within the US, race is the single most important predictor of support for welfare and that cities with more ethnic fractionalisation were less effective at providing public goods — building roads, picking up trash and spending money on education.

Economics and politics are intertwined and should never be separated, particularly when it comes to public policy. While mainstream economics may have gone astray for a good amount of time, we are fortunate that a giant in the field such as the late Alberto Alesina took up the cause of reuniting those fields.

His works continue to have plenty of relevance to Malaysia and, more broadly, the world today, and we should heed his ideas. And as we devise new ideas and policies for the socioeconomic development of Malaysia, we would do well to stand on the shoulders of a giant such as Alesina.