My E.G. Services Bhd has inadvertently become embroiled in a public outcry over the government’s move to make it mandatory for employers to do their foreign worker work permit renewal (FWPR) online as opposed to having the option to do so over the counter before.

Although MyEG (fundamental: 2.6; valuation: 1.5) has been offering its foreign maid work permit renewal service since 2011 and extended it to foreign workers in labour-intensive industries in 2013, the latest directive has effectively made it the sole company at which work permits for foreigners can be renewed.

Concerns have been raised over the RM38 per transaction fee imposed on the service on top of the RM125 processing fee, the timing of the announcement and also how the company is seen as monopolising the market. 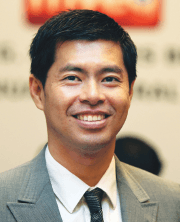 MyEG managing director Wong Thean Soon tells The Edge in an email that the RM38 fee was set and approved by the government after lengthy negotiations.

“Of course, there are those who print 1,000 copies in [the] Klang Valley, but there are also users who renew one permit in some remote plantation in Pahang. We have to look at it in totality,” says Wong, adding that MyEG’s scope of work is extensive and not just limited to printing out permits.

“The additional fee is necessary for our work and responsibilities since it is our only source of income.”

MyEG will not be receiving any additional payment from the government for its service from the RM125 processing fee that is to be paid by employers to the Home Ministry for work permit renewal.

Since Jan 5, the Immigration Department has expanded MyEG’s FWPR service to include identifying legal foreign workers and employers who knowingly or unknowingly hire illegal workers, and providing a convenient and efficient way to renew work permits.

According to the company’s announcement to Bursa Malaysia, it will capture digital biometrics of the employers and their representatives and analytics will be conducted on the data to generate trends that show the cause of the proliferation of illegal foreign workers and why some employers have a disproportionate number of foreign workers running away.

Some quarters recently slammed MyEG for monopolising the market and violating the Competition Act 2010. But Wong points out that the existing government database has been outsourced to many other IT companies. “Would it make a difference if the delivery of the permits and verification of the employers were done by other companies?

“Finally, it is the government’s decision that the end-to-end process is done by us to ensure that we are fully accountable for all aspects,” Wong says, adding that all centralised databases must be built by one party and that all the data is owned by the government.

When asked about the timing of the add-on service, he explains that this is within its e-government concession agreement signed in 2000, in which the company has supplementary agreements with other ministries to offer them its services.

“This implementation was always part of the plan, right from the beginning, and we have been notified a number of times about different implementation dates.

“If we had to make an announcement each time we were notified of an implementation date, we would have to make a high number of subsequent notifications of postponements, which would have been even more misleading to investors.”

MyEG’s added service will enable it to tap the two million foreign workers in the country.

Excluding Sabah and Sarawak, which have their own set of immigration laws, Wong says there are 1.5 million foreign workers in Peninsular Malaysia that will help MyEG generate RM57 million in revenue per annum. 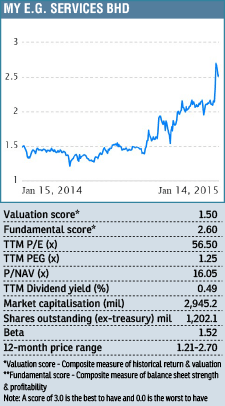 The increase in earnings was attributed to higher volumes of online FWPR, online transfer of vehicle ownership and online renewal of insurance and road tax. There was also a higher contribution to revenue from ancillary services related to its e-government services.

In a recent note, CIMB Research says MyEG’s earnings growth is strong — at 71% its three-year earnings per share compound annual growth rate. “Its operations will not be affected by the weak ringgit, higher interest rates and the Goods and Services Tax — positive factors for the company, given its custom service tax monitoring project.”

CIMB Research has an “add” call on the company and a target price of RM3.90.

MyEG’s shares reached a historical high of RM2.70 on Jan 8 from their 12 sen debut in January 2007. The stock has since dipped 9.26% and closed at RM2.45 last Thursday, giving the company a market capitalisation of RM2.94 billion.

Note: The Edge Research’s fundamental score reflects a company’s profitability and balance sheet strength, calculated based on historical numbers. The valuation score determines if a stock is attractively valued or not, also based on historical numbers. A score of 3 suggests strong fundamentals and attractive valuations. Please go to www.theedgemarkets.com for more details on the company’s financial dashboard.