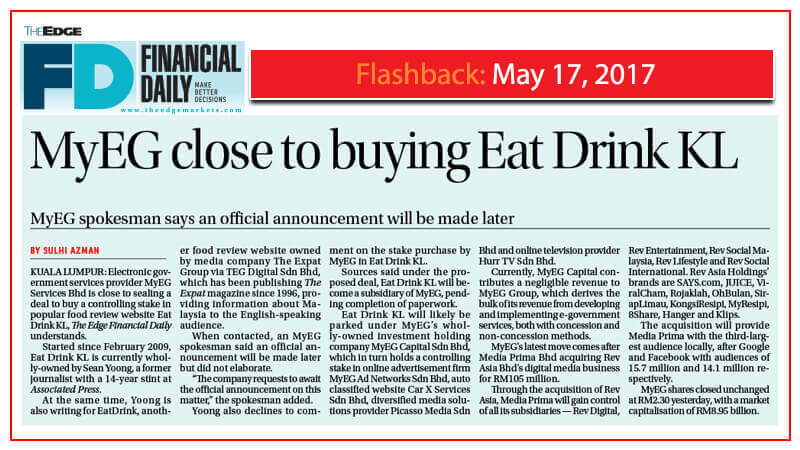 KUALA LUMPUR (May 17): Electronic government services provider My E.G. Services Bhd (MyEG) has confirmed that it is in negotiation to acquire a stake in popular food review website Eat Drink KL.

In a filing with Bursa Malaysia today, the company said the negotiation between its board of directors and existing shareholders of Eat Drink KL is currently ongoing and has not been finalised.

"However, the board will release further announcements once an agreement has been entered with all relevant parties pursuant to the ongoing negotiation," it added.

This confirmed a report by The Edge Financial Daily today that said MyEG was close to sealing a deal to buy a controlling stake in Eat Drink KL.

Started since February 2009, Eat Drink KL is currently wholly-owned by Sean Yoong, a former journalist with a 14-year stint at Associated Press.

At the same time, Yoong is also writing for EatDrink, another food review website owned by media company The Expat Group via TEG Digital Sdn Bhd, which has been publishing The Expat magazine since 1996, providing information about Malaysia to the English-speaking audience.