My views are sought by many, says Jho Low over leaked emails 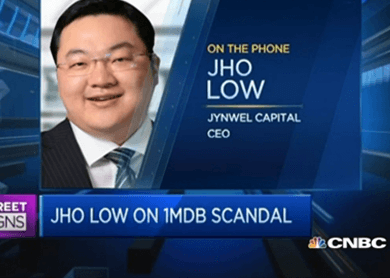 In a video interview on US business channel CNBC, Jho Low as he is better known, said his views on investments were widely sought after and that the inference drawn from the emails to allege that he had cheated 1MDB were "spurious, irresponsible innuendoes and truly unsubstantiated".

Asked by the interviewer if the email trail, as furnished by whistleblower website Sarawak Report, was fabricated, Low said: "My views are always sought by numerous parties because I have a very good relationship with the Middle East, and I always advocate for partnerships and globalisation.

"As PetroSaudi has repeatedly stated, all the funds from 1MDB went to PetroSaudi entities as publicly stated on 1 March 2015," Low said in the phone interview.

A video clip of the interview is posted on the CNBC website today.

Oil company PetroSaudi International was allegedly used by Low to siphon US$700 million through a loan repayment under a joint venture with 1MDB in 2009, according to Sarawak Report which provided documents and email trail to back its claim in a February 28 report.

Based on emails by individuals from PetroSaudi and 1MDB, including the Malaysian fund's former CEO Datuk Shahrol Halmi, the money ultimately was paid to an account belonging to Good Star Limited, a company said to be controlled by Low.

Low reiterated that he was a victim in the whole affair because of his friendship with Riza Aziz, the step son of Prime Minister Datuk Seri Najib Razak.

"I feel like I'm an easy target and victim perhaps because of my age and unfortunately, from the things done in my early years, the partying where I was having a bit too much fun then," he told CNBC, adding that he had been "lectured" by his father and grandfather.

The South China Morning Post yesterday quoted Low as saying he was a victim and denying that he was the "mastermind" in 1MDB's dealings.

To CNBC today, Low said that 1MDB's corporate governance structure – owned by the government and accountable to its shareholders – showed that the allegations were "political charged effort to put the blame on me when truly, I have no decision-making authority".

He said he was involved in the Terengganu Investment Authority in early 2009, but was not hired by 1MDB subsequently when it was formed after June the saw year.

"I don't get paid by them. But if someone in 1MDB asked for my views, I would give them."

Low also said he would cooperate with any investigation into 1MDB, after the Auditor-General conducts an independent audit of the firm before passing on the findings to other authorities to investigate any wrongdoing. — The Malaysian Insider