My Say: Should Asia worry about a Ukraine crisis? 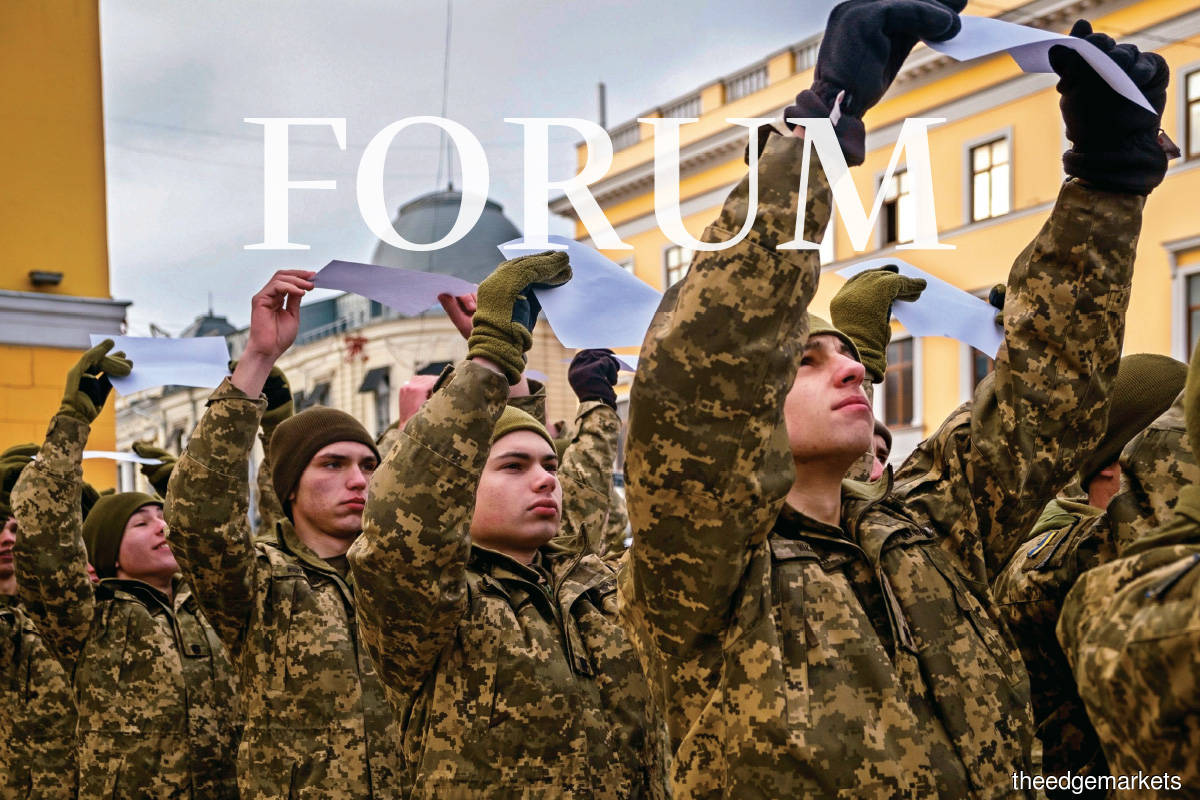 Ukrainian soldiers at a rally in Odessa. A limited incursion by Russia into Ukraine could still show the US and Europe as unwilling to fight but not risk spiralling into a wider conflict that Russia does not want.

Financial markets have become highly volatile over growing geopolitical concerns. Worries over the US Federal Reserve Bank’s monetary policy may have played a part in recent market corrections but the severe drubbing that European markets took compared with American ones suggests that the increased prospects of a war in Ukraine are a more important reason for the market gyrations. Asian markets also took a beating — investors became more risk-averse and pulled capital out of emerging markets and into safe havens. Investors in Asia also worried that missteps by the US and its allies in Ukraine might embolden the US’ rivals in Asia to become more aggressive.

Our view is that there is indeed a rising chance of military conflict in Ukraine. But fears that military confrontation would spread to Asia are greatly exaggerated. Tensions between China and Taiwan are certainly intensifying but arguments that China would be emboldened by American missteps in Ukraine into attacking Taiwan do not stand up on closer examination. Rather, China is likely to pursue a patient strategy of relentlessly increasing pressures on Taiwan, taking care to avoid any chance of a direct clash with the US for now.

What’s likely to happen in Ukraine?

Russia has massed about 100,000 troops and sophisticated military equipment near its border with Ukraine and threatened a military campaign against Ukraine unless the US and its European partners concede to its demands. Russia wants a guarantee that Ukraine will not be accepted as a member by the Nato military alliance. Other conditions require the Western allies to reverse most of Nato’s eastward expansion since 1997. That expansion has unnerved Russia, a country that has endured several invasions from the west over the centuries. In effect, what Russian President Vladmir Putin is asking for is that the Western allies cede Ukraine to Russia’s sphere of influence.

But that is not something that the US or its allies are prepared to concede. To cave in to Putin’s pressure would give the impression of Western weakness and unreliability as an ally. It would open the way for ever more demands by Russia or other rivals of the West. The credibility of President Biden would suffer a fatal hit as well. Polling shows substantial majorities of Ukrainians favour closer ties with Europe and the US over relations with Russia so any concession to Russia would give the impression of the West betraying its friends. It is not surprising therefore that recent talks between the foreign ministers of Russia and the US failed to overcome the deadlock.

This makes some form of Russian action against Ukraine likely — after having ramped up tensions, Putin would look ineffectual if he did nothing. But Russia may not want to risk an all-out invasion of Ukraine. It has the military capacity to overwhelm Ukrainian defences and even seize its capital city of Kyiv if it wanted to, but remaining in occupation of a country with a hostile and well-armed population would result in heavy losses that could strain Putin’s diminishing popularity at home.

So, a more likely scenario to expect in coming weeks is of a limited Russian incursion that expands the current areas of Ukraine that are under effective Russian control. Putin might calculate that such a move would be sufficient to punish Ukraine for its pro-Western orientation and achieve his strategic goals while also boosting his standing at home. The US and Europe have made clear that they will not send troops to defend Ukraine against Russia, though they would supply Ukraine with military equipment and impose tough sanctions on Russia. Thus, a limited incursion could still show the US and Europe as unwilling to fight but not risk spiralling into a wider conflict that Russia does not want.

Why this matters for Asia: potential implications for China and Taiwan

What happens in Ukraine will impact how allies and rivals of the US in Asia assess the American willingness and ability to aid its Asian allies. In recent years, China’s President Xi Jinping has made it clear that Taiwan’s reunification with mainland China is not something that can be put off forever. He had made it clear that his signature vision of the “great rejuvenation of the Chinese nation” entails the return of Taiwan to the Chinese fold. To this end, China has massively increased its military capacity in the Taiwan theatre of operations. In recent years, Chinese military aircraft have also mounted increasingly intensive incursions into Taiwan’s air defence identification zone as a means of pressuring Taiwan.

Thus, China will certainly study how the Biden administration stands up to a Russian incursion into Ukraine. China knows that it cannot match the US’ military might just yet, but any sign of a diminishing American will to stand up for allies would encourage China to speed up its plans for Taiwan. The US administration has signalled that Ukraine is not such a strategic priority for it that it would risk a military confrontation with Russia. Some analysts have claimed that China will interpret this cold-blooded calculation as a loss of will, and would be encouraged to step up military pressure against Taiwan as a result.

We think this is far-fetched. China’s foreign policy leaders are astute enough to see that the reason for the Biden administration’s stance on Ukraine and for its withdrawal from Afghanistan is precisely because the US is prioritising the allocation of military resources to the Indo-Pacific theatre, where its interests are greater. Taiwan’s strategic value to the US is far greater than Ukraine’s. Taiwan is right on China’s doorstep. Allied to the US, it essentially helps the US to block Chinese forces from accessing the western Pacific Ocean, keeping its naval forces bottled up in a narrow strategic space. Loss of this crucial strategic advantage would weaken the US ability to defend Japan and make it easier for China to threaten US military movements in the western Pacific. Taiwan is also of critical importance economically given its production of critical technological goods.

Just to make sure that China understood its commitment to Taiwan clearly, the US has boosted its military presence near Taiwan sizably as tensions in Ukraine rose. The US Navy now has three aircraft carrier strike groups in Taiwan’s vicinity. There are several other naval forces in the area conducting military exercises. Such an unusually large American military presence is a deliberate signal to China not to up the ante over Taiwan during any potential Ukraine crisis.

In short, Taiwan provides vital strategic support for the US’ Indo-Pacific strategy, something that Ukraine does not come even close to matching. Note that the US has been determined to be a force in the western Pacific since the 1850s, soon after California became a part of the country, giving the US an interest in the Pacific Ocean. Recall that in 1853, even as a relatively small military player with a limited army and navy, the Americans deployed a naval task force that sailed into Yokohama Bay and forced Japan to open up to the world. Its interests in the Indo-Pacific region have expanded hugely since then as has its military capacity. It is highly unlikely that the US will allow its positioning in the region to diminish — and Taiwan is a critical element in that.

What should we expect from China then?

China currently lacks the military capacity needed to pull off a successful invasion of Taiwan. Taiwan’s geography makes it a difficult target for an amphibious assault needed as it has only a limited number of beaches suitable for an invading force to target. These areas are well fortified by Taiwan. Neither does China have sufficient sea lift capacity to transport the tens of thousands of troops it would need. Worse still, China currently does not have the military capacity to neutralise the US aircraft carriers that would come to Taiwan’s defence.

China under Xi will be a rational player; it would not mount a military adventure over Taiwan now, when its chances of success are questionable. In the minds of China’s leaders, there is no urgency for China to take such risks. Rightly or wrongly, they are confident that time is on their side, that the US is a declining power while it is a rising one. In their minds, all it needs is to be patient and eventually the weakening US will find it expedient to reduce its support for Taiwan.

China’s strategy against Taiwan will be more deliberate and long term in nature. In the near term, it will keep raising pressure on Taiwan. Its air and naval intrusions along Taiwan’s periphery will be intensified. Note that, over the previous weekend, China deployed 39 military aircraft into Taiwan’s air defence identification zone. This was the largest such intrusion since October last year. It may also harass Taiwanese forces as they resupply their troops defending outlying areas currently controlled by Taiwan, such as the Pratas Islands, which lie around 500km to the southwest of Taiwan.

China is also likely to step up its efforts to isolate Taiwan diplomatically. In recent years, it has successfully wooed several of Taiwan’s few remaining friends to its side, the latest being Nicaragua. In the coming years, it is likely that many of the remaining countries with full diplomatic relations with Taiwan will switch allegiance to China.

China will gradually squeeze Taiwan economically as well. It may also attempt more subversion of Taiwan using its allies among the small minority of Taiwanese who still favour unification with China. China will use these “grey zone” tactics to pressure Taiwan since they entail fewer risks of an outright clash with a still-powerful America. With such a strategy putting Taiwan under immense strain, the Chinese leaders will hope that Taiwan’s will to keep rebuffing China will weaken.

In the meantime, China will seek every means to keep the US and its Asian allies such as Japan and South Korea off balance. Until recently, Beijing had been careful not to encourage North Korea to undertake any military adventures. But now that it faces a US that is more hostile to it, China may be more open to using North Korea against the US. Sensing this, North Korea has become bolder against the US. It has rebuffed every invitation for talks on its nuclear and missile programmes. It has stepped up the testing of missiles, including hypersonic ones that could be used against American aircraft carriers. In coming weeks, it may go back to testing nuclear weapons as well.

Conclusion: No war over Taiwan but certainly a more troubled region

In short, given the above conditions, it would take a highly unlikely series of misjudgements by the Chinese, Taiwanese and Americans for tensions to escalate into outright military confrontation in Taiwan in the near term. But this does not mean that all will be well in north Asia — Chinese pressure on Taiwan will grow and North Korea could also make mischief. Political risks will increase but not to a level that should alarm us right now.