my Say: A harsher global environment requires a regional response 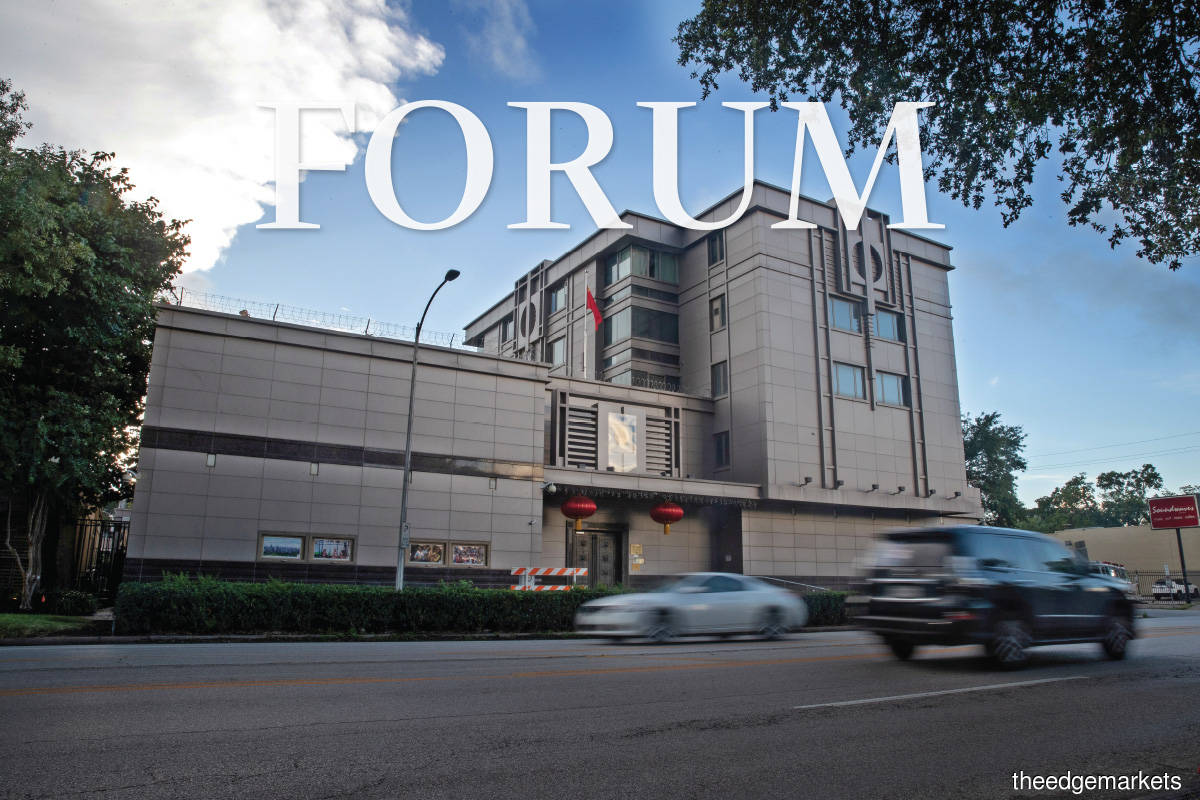 On July 21, the US ordered China to close its Houston consulate (pictured) within 72 hours. In retaliation, on July 24, China ordered the closure of the US consulate in Chengdu. There are huge implications for Southeast Asia as US-China frictions worsen.

Southeast Asia is only gradually coming to grips with the Covid-19 pandemic, but it does not have the luxury of postponing action to tackle the longer-term dangers that it faces. The discouraging developments seen in the past few weeks have made that clear. The rift between the West and China is widening, with immense consequences for Southeast Asia, including a higher risk of regional conflicts, trade protectionism and technological bifurcation.

Moreover, the cost of managing the pandemic will leave a high burden of debt everywhere while the massive monetary interventions are likely to produce a great deal of financial turbulence. Globally, economic growth is likely to slow as continuing uncertainty dampens business investment and as both businesses and households save more to build stronger buffers against potential shocks. The severe flooding in China reminds us that climate change is not some faraway danger but a present one that demands more urgent action than we have committed to so far.

The regional landscape will be shaped by these challenges and how each country responds to them. There are many initiatives emerging in individual countries. But a key part of the response has to be a collective one since no single country in this part of the world can tackle this challenging new world on its own. This is where regional integration comes in and this is where there are some encouraging signs.

The divisions between the US and China in particular are deepening by the day. Much has happened in just the past couple of weeks:

•    The US signalled a tougher stance on the disputed South China Sea waters. The Trump administration has now explicitly aligned itself with the 2016 ruling of the International Tribunal for the Law of the Sea, which rejected China’s territorial claims over roughly 85% of the South China Sea. In essence, the US is clearly prepared to do more than it has done so far to undercut China’s fait ­accompli in the South China Sea. US Assistant Secretary of State for East Asian and Pacific Affairs David Stilwell warned that “there is room for [sanctions]” and that “nothing is off the table”;

•    The Trump administration is pressing US companies not to compromise with China. Attorney General William Barr lashed out at US entertainment and technology giants by name, for what he claimed were acts of appeasement of China. The administration recently blacklisted an additional 11 Chinese firms — with suppliers for Apple and Ralph Lauren among the list of companies banned, US companies have to worry about who their suppliers are and how to mitigate the risk of running afoul of ever-growing official restrictions; and

•    The US Senate will soon pass legislation that further targets China. This wide-ranging bill will entrench US pressure on China beyond the November presidential election. It has bipartisan support as well, so a new administration will not change things. The Senate bill covers trade and technology affairs that have bedevilled bilateral ties and has provisions to deter US companies from complying with Chinese government regulations in some areas. It also offers incentives to US corporations to relocate their operations out of China.

Thus, there are huge implications for Southeast Asia as US-China frictions worsen. China has indicated that it could impose its own retaliatory sanctions against US individuals and entities. Its separate announcement of sanctions on Lockheed Martin for supplying arms to Taiwan was a clear signal of what it could do to hurt US interests if it chose to. China will find ways to hurt selected US corporations while toughening its stand on Hong Kong and the South China Sea to demonstrate that it is not intimidated by the US actions.

Southeast Asia will be caught between a rising neighbour, China, and a long-standing and vital trade and security partner, the US. As both countries bicker, each will impose more trade sanctions on the other and, since Southeast Asian manufacturers play an important role in the supply chains that connect China to the region, Southeast Asia will suffer. It is also clear that the dispute between the US and China will result in a technologically bifurcated world — one part is dominated by US/Western standards and another by China. Smaller countries will be forced to choose between the two and risk enraging the big power that might be spurned in that process. Worse still, a technologically divided world will be a far more inefficient one with higher costs, which would diminish economic growth.

The region should not take comfort from some positive spillovers from US-China tensions such as more foreign manufacturers relocating production out of China to Southeast Asia. The benefits that flow from that relocation are real but will be dwarfed by the downsides.

Regional integration is the way forward and it is making progress

Asian countries need to find mechanisms that will protect them from the political risks while also preserving some gains from trade. This is where regional integration comes in — and the good news is that this process is gaining momentum.

The first reason for optimism is that the Comprehensive and Progressive Agreement for Trans-Pacific Partnership is making progress. The CPTPP’s promise lies in the fact that its 11 members represent about 13% of the world economy and that it is a “21st century trade agreement” that dares to go beyond tariff cuts to address non-tariff barriers such as customs and trade facilitation as well as standards and technical barriers to trade. The compromises on contentious issues, such as labour issues, environmental standards, the treatment of cross-border investment, trade in services, government procurement and the treatment of state enterprises, also pave the way for other integration efforts. It is forward-looking because it also achieved a consensus in rapidly evolving areas such as intellectual property rights protection and e-commerce.

With the CPTPP now in force, more countries that initially disdained joining are showing an interest:

•    China is hinting that it might join the CPTPP. Premier Li Keqiang indicated in his late May address to China’s parliament that the country had an “open attitude” towards joining. Li’s statement was clearly more than just a diplomatic statement of intent. Soon after he spoke, former commerce minister Chen Deming confirmed that studies had been done about China joining the agreement and indicated that it would start testing the waters with important stakeholders. China’s accession would substantially increase the CPTPP’s coverage of the world economy from 13% to close to 30%, thereby expanding the net benefits for members;

•    Thailand’s government is also gingerly preparing the ground for a formal application to join the CPTPP. The government has initiated a formal study of the CPTPP that will be completed in September to assess whether it should apply to join the CPTPP. Advocates have noted that CPTPP membership would boost Thailand’s annual GDP by 0.12%, or THB13.3 billion (RM1.78 billion), while not participating would result in a fall of THB26.6 billion, or a contraction in GDP of 0.25% a year. It will not be easy to resolve the resistance in Thailand to the CPTPP, which stems from concerns over whether enforcement of intellectual property rights might unfairly favour multinational companies over Thai companies in the agricultural and pharmaceutical industries. Japan has offered, however, to allay Thai concerns over food security and access to medication. There is a real chance now that Thailand could apply to join and start the accession process later this year;

•    South Korea’s government had made a determination that the country should join the CPTPP. However, the country’s ugly dispute with Japan over war reparations has become an obstacle, as Japan might obstruct its application; and

•    The UK is also showing interest. It initiated exploring membership in the CPTPP in July 2018, and its approaches were reportedly favourably received by all 11 member countries. Some observers, however, such as Australia’s trade minister, have indicated discomfort with the participation of a country outside the geographical sphere of the CPTPP.

The second reason to be optimistic is that the Regional Comprehensive Economic Partnership is on track to be completed and signed by year-end despite the pandemic. In late June, an RCEP ministerial statement confirmed the grouping’s commitment to complete the legal processes so that the RCEP can be signed by year-end. RCEP brings together 15 countries — the 10 Asean members, China, Japan, South Korea, Australia and New Zealand.

Also encouraging is that other regional integration agreements are taking shape. The enhanced Chiang Mai Initiative Multilateralization came into effect in June. The amendments to CMIM have allowed for greater coordination between the members states of CMIM and the International Monetary Fund through increased flexibility and communication. Individual countries have also pushed ahead with bilateral deals of their own. Among these, the EU-Vietnam trade deal, which was ratified in June, is the most consequential, as it will reduce 99% of tariffs over 10 years. The Indonesia-Australia free trade agreement has also just come into effect earlier this month after 15 years of negotiation. The FTA will remove almost all tariffs between the two countries.

The bottom line: Strategic and economic benefits of integration could encourage more to join

These integration initiatives will yield economic benefits for its members while diverting trade and investment away from non-members. Countries that do not join RCEP will lose, as demand will be diverted away from their exports. RCEP is predicted to increase trade among its members by US$438 billion (RM1.86 trillion) while reducing trade for non-members by US$48 billion. Other trade deals can also boost growth. For example, the EU-Vietnam deal is expected to increase Vietnam’s GDP by 2.4% by 2030, and raise total Vietnamese exports by 12%. It would also help spur foreign direct investment into Vietnam, as 15.6% of foreign investment comes from Europe. Moreover, in the long term, the reforms Vietnam has committed to make under the agreement will also make it more competitive.

There will also be strategic benefits from such agreements. The RCEP, for example, could help bring China, Japan and South Korea, which are often squabbling among themselves, closer together. If RCEP produces better relations among the three countries, a trilateral trade deal among the three would be made possible. In other words, the signing of the RCEP could generate a more wide-ranging increase in regional integration in East Asia.

In short, collective action is needed in the region to protect it against what will be a troubled post-pandemic world. It is encouraging that there are signs of progress in this area.