My Say: The global economy and Southeast Asia next year 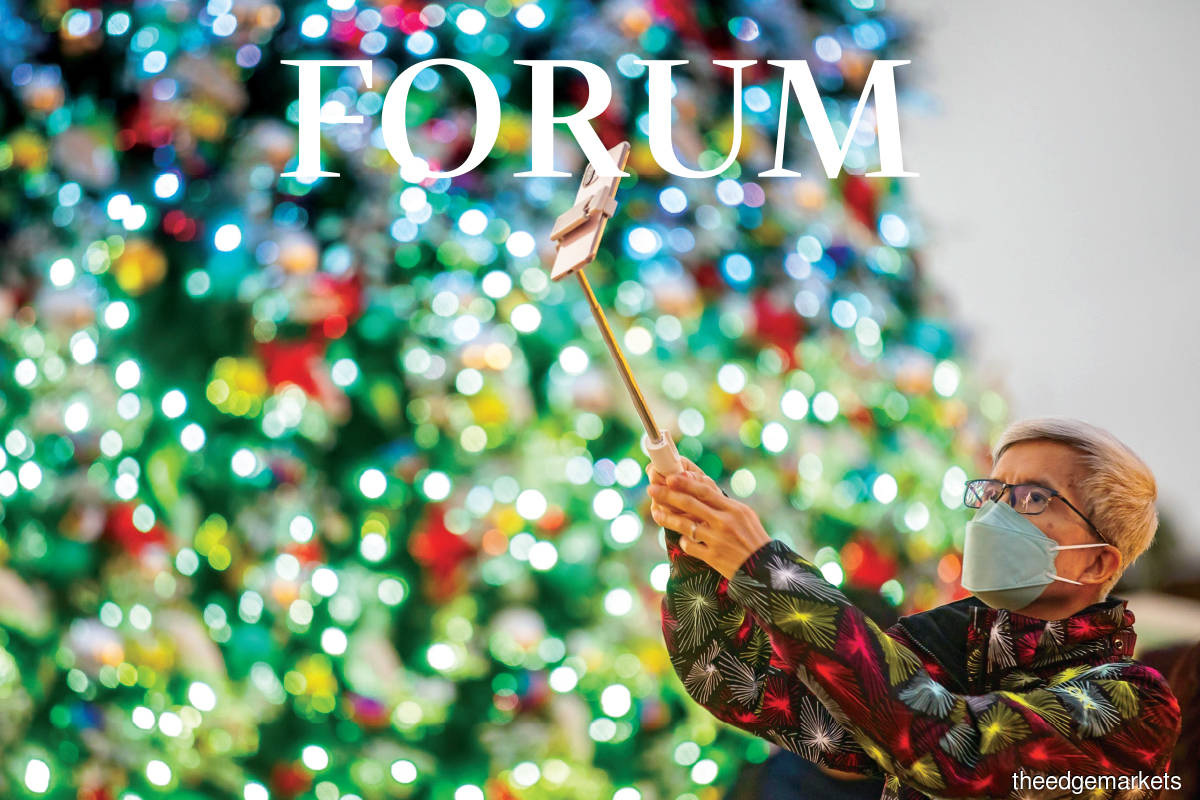 Even with mask on, a visitor poses for a selfie photograph with an illuminated Christmas tree in Hong Kong, China. Covid-19 is not going to disappear and may even evolve new variants, but our capacity to deal with it is improving by leaps and bounds as well.

These past 12 months marked an improvement, but only because 2020 was such a deplorable year. The global economy recovered, but the extent and quality of that rebound has been disappointing. On the geopolitical front, it was a similar story — nothing went spectacularly wrong, but the improvements that many of us had hoped for did not materialise. This series of let-downs has made observers wary of being too cheery. Indeed, there is a tendency in some quarters to focus greatly on what can go wrong and not enough on what can go right.

Our view is that, actually, a lot could go right in the coming year. Not only is there a good chance that the global economy will snap back smartly but the foundations are also likely to be laid for a period of sustained and productive transformation. Of course, some things will go wrong but, based on what we know, these setbacks are unlikely to throw the world economy so badly off-track to the point that Southeast Asia’s prospects are blighted. We see the pandemic imposing less economic damage, allowing strong drivers of growth to emerge. There will be other perils that the global economy will have to navigate, but in each case, these are not so formidable that they cannot be mitigated.

No one should underestimate the downsides that a virus with Covid-19’s capacity to mutate could trigger — as we saw with the recent worries over the Omicron variant. We are not denying the possibility that there could be a few more episodes of concern. But, we must also set against this undoubted risk other developments that strengthen our ability to deal with the virus without depressing the livelihoods of people.

•     Despite some disappointments, vaccination rates have increased and will continue to do so. As of the end of November, around 54.2% of the global population had received at least one dose of a Covid-19 vaccine and close to 40% are fully vaccinated. But in low-income countries, only an abysmal 5.8% had received their first jab. The Omicron variant, however, has shown rich countries that unless they help the poorer countries expand vaccination programmes, more variants could spread and hurt everyone. We expect a big push on vaccinations to help narrow the gap and reduce those risks.

•     Moreover, new drugs have been developed that can reduce the severity of illness caused by the virus. Merck’s molnupiravir reduces the risk of severe illness and by 30% if taken early enough. Preliminary tests show Pfizer’s anti-viral pill to be 85% effective in avoiding severity and fatalities. Antibody treatments developed in China are also showing promise in treating the disease. In addition, after two years of experience, doctors and nurses have developed more effective clinical management techniques that also reduce the dangers associated with this virus. The case fatality rate has fallen sharply since 2020 as a result.

•     Finally, as the severity of illness caused by the virus eases, the disease is becoming less “scary”. And that has meant that governments across the world (except in China/Hong Kong) are less and less willing to employ economy-crushing restrictions to bring new surges of infections under control. It also means that ordinary folks are less prone to panic when infections rise.

In short, the Covid-19 virus is not going to disappear and may even evolve new variants — but our capacity to deal with this is improving by leaps and bounds as well. The balance of probabilities suggests to us that Covid-19 will not hurt economic activity in 2022 as much as it did in 2020 and 2021.

Strong drivers of growth can therefore kick into effect

Given this view of the pandemic, we are likely to see the release of considerable pent-up demand. Excess savings among US households alone are estimated at around US$2 trillion. As the economy revives and health outcomes improve, much of this astounding amount will be spent, boosting economic growth. More powerfully, as businesses regain confidence, they will take up postponed plans for capital spending. Remember that expansion plans were already being delayed before the pandemic because of the uncertainties caused by former president Donald Trump’s trade war. The pandemic deterred even more capacity expansion. The coming year will almost certainly see a revival in corporate investment spending, and that will have substantial multiplier effects.

But there are other forces that will not only fuel higher growth but also help lay foundations for a new phase of economic transformation. Many of the positive engines of growth that were slowly emerging prior to the pandemic have now reached take-off points, so once the pandemic eases, they will rev up strongly:

•     Technological innovations have proliferated, not just in the info-comm space but also elsewhere. There are revolutionary improvements underway in renewable energy, in new materials and in the bio-medical area, just to name a few. The opportunities for creating new profit drivers will be so compelling that we expect a surge of capital being allocated to them.

•     The reconfiguration of supply chains was interrupted by the pandemic. There are now some signs that companies are renewing their efforts in this field. Conscious of China’s rising costs and its worsening frictions with Western countries, some production will be relocated out of China — with Southeast Asia being the main beneficiary.

•     Initiatives to hasten economic development had also been delayed or postponed by the pandemic. Ambitious infrastructure plans in India, Indonesia, Thailand and the Philippines, for example, were put on hold while governments in those countries diverted scarce fiscal resources to address the pandemic. With the crisis ebbing, growth-promoting projects to build roads, railways, ports, airports and power stations will resume with gusto and boost growth. China will also be expanding its ambitious efforts at urban renewal, replacing slums with higher quality homes.

•     With the pandemic in abeyance, the synergies from economic reforms can also be finally realised. Whether it is the labour reforms in India and Indonesia; or the powerful impact of the introduction of the goods and services tax in India, which helped unify India’s scattered markets into a single one; or the improvements in the business eco-system in these countries as a result of deregulation, the positive effects are now likely to flow.

In other words, there is no shortage of engines of growth that can kick in once confidence returns. Each of these engines described above is powerful and capable of generating substantial economic expansion, particularly in our region.

Three downside risks to worry about

Assuming that our assumptions on the pandemic are right, there are three remaining perils that could handicap the recovery we expect.

The first big concern is geopolitical. Relations between the US and China are fraught while Russia’s activities close to its border with Ukraine could spark tensions with the US and its European allies. Recent talks among the big powers, however, provide hope that the worst can be avoided in these areas. China’s President Xi Jinping and US President Joe Biden held constructive talks recently that pave the way for serious negotiations on areas of disagreement. Similarly, Russian President Vladimir Putin recently held talks with Biden that were tough but that allowed the two countries to understand each other better so that serious frictions might still be avoided.

Rather than an outright clash between the big powers, a more likely risk is that mutual suspicions may lead to measures in areas such as trade, technology and finance that could cause economic damage. We think this is likely and if so, it will be regrettable but not disastrous for the global economy.

Another potential dislocation to the global economy is the payback to years of ultra-easy monetary conditions. We think this is an important risk that investors must prepare for:

•     At one level, this could simply be a higher rate of inflation that forces central banks to tighten monetary policies ahead of market expectations. Our view is that inflation will be higher over the coming five years compared with the very low rates that prevailed just before the pandemic — but will eventually settle down to levels not materially higher than the 2%–3% in developed economies that central banks can live with. Inflation in 2022 could be a tad more worrying and probably enough to spur the Fed into raising rates a couple of times in the second half of the year.

•     At another level, though, there is the risk of financial imbalances caused by excessive risk taking and aggravated by the stretched valuations in bond, equity and real estate markets. By their nature, the timing and scale of the corrections these imbalances can cause are unpredictable. Our gut feeling tells us that we should not be surprised by occasional bouts of trepidation in markets over such issues.

A final major risk is of sharply lower economic growth in China. A highly successful mobilisation to limit Covid-19 infections in China helped the nation recover from the current crisis ahead of other countries. But that recovery has been set back by growing financial imbalances, a correction in the real estate sector and sharply slower investment spending. There are some concerns that exports whose vigour has helped support growth could now weaken as growth in global demand shifts to services from Chinese-made goods and as the stronger Yuan erodes export competitiveness. A low-probability but high-impact risk is if somehow, despite all China’s efforts, some Covid-19 variant breaks through into China — in which case China’s Covid-naïve population would experience a sharp surge in infections. That would have very bad consequences for economic growth.

In recent days, Chinese policymakers have begun to provide more stimulus to the economy and have become more proactive in managing the financial imbalances, such as the likely defaults by major property development firms. Chinese policymakers have a formidable record of effectiveness, which should provide us with some comfort. Nevertheless, the scale of the headwinds confronting China today are greater than before, so it would be prudent to plan for slower growth in China and occasional episodes of financial stresses.

Conclusion: what does this all mean for Southeast Asia?

Pulling all this together, we would say the following:

First, global economic growth could surprise on the upside even if there are occasional flurries of concern. If the composition of that growth leans towards capital spending, as we believe, that will be quite positive for the region’s exporters of manufactured goods such as Thailand, Vietnam, Malaysia and Singapore. Elevated commodity prices would also provide an additional uplift.

Second, positive economic growth outcomes may not translate into upside for prices of financial assets. Tighter monetary conditions are likely. In the context of already-stretched valuations, that does raise the risk of painful market corrections from time to time. The one consolation for the region is that with improved credibility of monetary and fiscal policies in the region, there is less risk than before of sharp currency corrections. If economic growth is as promising for the region in the medium to longer term, then the region should be able to weather such financial turbulence better than in the past.

In short, buckle up for a bumpy but ultimately exhilarating ride.