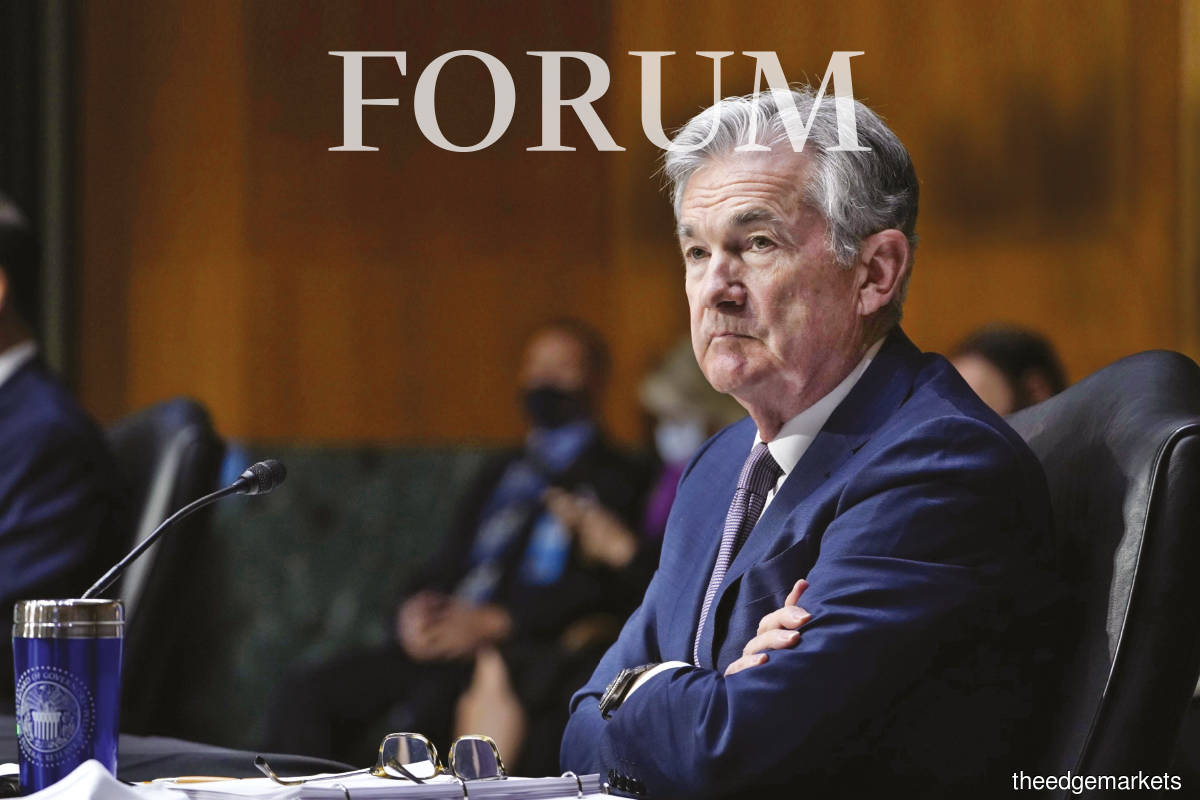 Fed chairman Powell was at pains to persuade folks that, despite the growing likelihood of a robust rebound, the US central bank he heads would not step back from the ultra-loose policies that have supported the economy — and fuelled financial asset prices. Photo by Bloomberg

US Federal Reserve chairman Jay Powell was right to observe that the US economy is at an “inflection point”. In fact, there are several important inflection points approaching — in global economic activity, in how the Covid-19 pandemic is being managed, in important policies that affect markets and companies, and in geopolitics. The next few months are likely to be turbulent, to say the least. Economic prospects are likely to brighten, underpinned by a growing likelihood that the economic damage caused by the pandemic is reversing. But, changes in policy and geopolitical developments could unnerve financial markets, particularly emerging markets.

There are tantalising data points that hint that the world economy could soon surprise strongly on the upside. The New York Fed’s Weekly Economic Indicator points to US economic growth being much stronger than the consensus believes. Chinese exports surged in March, after robust numbers for January to February. No, this is not simply because of a low base in the first quarter of 2020, when the Chinese economy tanked and Covid infections were at their worst. What is stunning is that Chinese exports in March 2021 were about 21% bigger than those for March 2019. South Korea’s exports for the first 10 days of April also sizzled — up almost by a quarter over the year ago. Encouragingly, South Korean export growth is not just being driven by semiconductors as previously but exports of automotive as well as of chemicals are also growing rapidly. This tells us that the global economic recovery is broadening out.

There is good reason to believe that this pickup in activity can be sustained. The Organisation for Economic Co-operation and Development’s (OECD) composite lead indicators are rising across the board — indicating that economic growth will probably rev up in both developed countries as well as developing ones. Surveys of purchasing managers show the pipeline of new orders growing. In the US, the new orders indicator in both the manufacturing and non-manufacturing surveys were at or close to record levels in March.

What is even better is that imports are growing strongly in economies that have put the pandemic behind them. Chinese imports in March this year were 37% larger than in March 2019. In other words, as economies get to grips with the pandemic, economic recovery spurs growth in their imports — recovery in one country spills over into other countries and pulls them along as well.

The recent news of spikes in infections in India, Brazil and in parts of Europe and the US has been a dampener. The bad news has continued with the revelation that both the AstraZeneca and Johnson & Johnson vaccines might have serious side effects.

However, there are three important factors to watch to get a sense of how the pandemic crisis will affect economic activity.

The first is the accelerating pace of vaccinations. In the US, the vaccination rate is running at 3.1 million a day, a pace that will allow the US to reach herd immunity in late June or early July. The European Union was slow off the mark but, in the past week, Germany, France and Italy have all managed to ramp up vaccinations. France is now inoculating around half a million people a day, almost catching up with the UK, which has pulled off a successful vaccination drive.

The second is the growing urge among governments to ease restrictions and find ways to revive activities that have been hit hard by the pandemic — including cross-border travel and tourism.

The third factor is policymakers, companies and workers are adjusting to lockdowns so that the economic damage caused by new spikes of infections is less severe than in 2020. Lockdowns are less stringent than before, allowing for more flexibility. Europe is a good example of this greater resilience. The latest OECD weekly economic activity indicator reflected a eurozone economy that was broadly stable in the first quarter despite the surge in infections. A similar picture is emerging in India as well.

Fed chairman Powell was at pains to persuade folks that, despite the growing likelihood of a robust rebound, the US central bank he heads would not step back from the ultra-loose policies that have supported the economy — and fuelled financial asset prices. He explained his position by saying it would still take some time before all the people who lost jobs regained a decent livelihood.

If the economy is really recovering so powerfully, however, then jobs growth is set to accelerate markedly. The recent labour market survey in the US showed job openings soaring to a two-year high. There were strong indications that employers in the hardest-hit industries such as accommodation and food services are close to stepping up hiring in the coming months. If, say, US payroll reports soon start to show several months of massive jobs growth, financial markets will price in a Fed shift of policy, whatever Powell and his colleagues say. Bond yields will rise and the Fed will be pressed to recalibrate what it tells markets.

It is not only in the US that policy could tighten. In China, the authorities appear confident enough of the durability of the recovery that they are gingerly reducing monetary support for the economy and shifting focus to areas such as regulating big tech companies and cooling price movements in the housing sector — these policy shifts could slow growth.

In fact, policy changes that go beyond addressing the Covid impact on the economy will become more prominent. Essentially, 40 years of pro-business policies are likely to give way to tax, regulatory and other changes that reduce corporate power.

In short, policies are going to change — and not just Fed monetary policies that financial markets fixate on. These changes are likely to hurt emerging economies whose currencies have already started to wobble — look what happened to the Taiwan dollar last week when there were fears of Taiwan being labelled a currency manipulator by the US or to the Indian rupee the week before.

Is it a coincidence that Russian forces are menacing Ukraine just as China steps up assertive activities in the South China Sea, the Taiwan Strait and the East China Sea near Japan? In the past few weeks:

The main area of concern is Taiwan, where there is speculation that China may want to pull off a takeover of Taiwan to mark the 100th anniversary of the founding of the Chinese Communist Party in July. This is highly unlikely. Most military observers assess that China does not have the military capacity such as sufficient landing craft to penetrate Taiwan’s difficult coastline nor the offensive capacity to neutralise the American aircraft carriers that would almost certainly be deployed to defend Taiwan.

The more likely scenario is one of persistently increasing Chinese air and naval harassment of Taiwan’s defences. China will also probably continue its strategy of using its maritime militia to occupy waters in the South China Sea claimed by other countries in order to assert its sovereignty over those areas. This approach does raise tensions in the region but is unlikely to lead to outright clashes or a wider conflict.

The greater danger is that Russia and China appear to be coordinating these moves so as to test US President Joe Biden. The idea may be to show him and the US as unable to match reality with rhetoric. After all, Biden has just announced that American troops will exit Afghanistan by September — which would almost certainly result in the hardline anti-American Taliban gaining power in that country. Such moves could convince the US’ rivals that it does not have the stomach to fight and so encourage them to be more aggressive. North Korea, which is facing a dire economic crisis, is also watching closely, as its leaders may not mind an external crisis to draw attention from the mismanaged economy. Thus, we are in a period during which some countries will push and shove each other, taking care not to provoke war, but still creating occasional crises.

The US economy is poised to surge: This will not just be a rebound from a low base but something much more powerful, the start of several years of strong growth. It would not surprise us if the US economy expanded by more than 6% this year and more than 5% next year — growth rates are more commonly associated with dynamic emerging economies, not mature developed ones. With China growing vibrantly and Europe eventually mounting a good recovery by year-end, we would have all the major global economies expanding vigorously and so boosting overall global growth.

Such strong growth must mean, however, that ultra-easy monetary policies will be reversed more quickly than financial markets have priced in. Strong growth may do wonders for corporate profitability but, as policy frameworks become less pro-business, higher taxes and harsher regulations could offset that positive. Finally, while geopolitical tensions will probably not explode into outright war, growing frictions are likely to produce occasional but short-lived political crises that would rattle business and market confidence. Welcome to the 21st century.