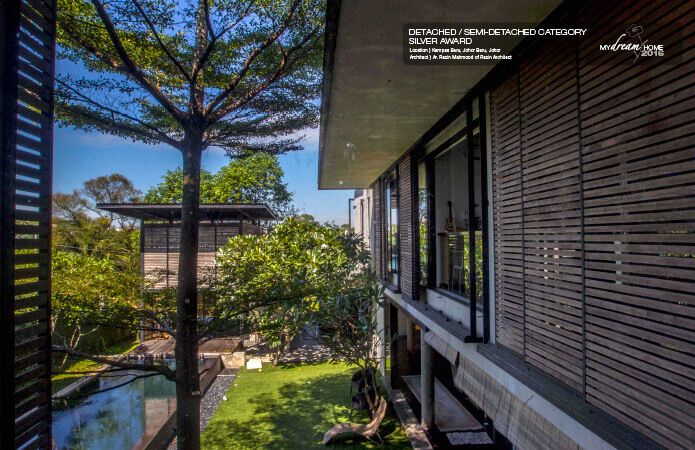 Shrubs, plants and larger trees act as a divider of sorts creating a subtle demarcation and providing some privacy for the occupants of the otherwise open living space 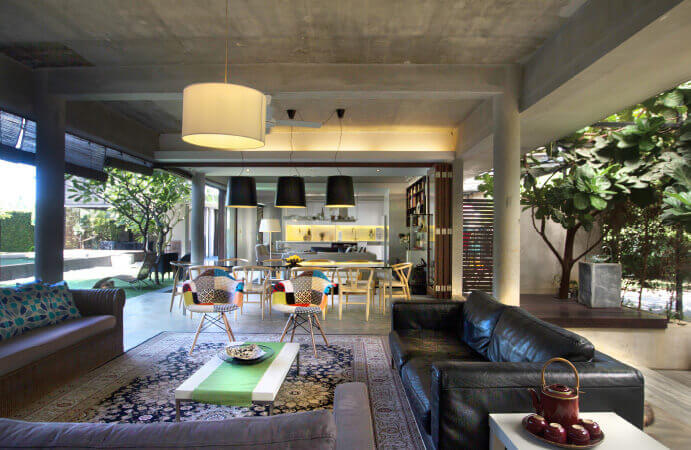 The furniture in this tropically-inspired home is a combination of what’s practical, eclectic and close to the close to heart, from the ready-made colourful chairs to the 15-year-old custom made rattan sofa and carpets purchased for the couple’s eldest daughter’s akad nikah 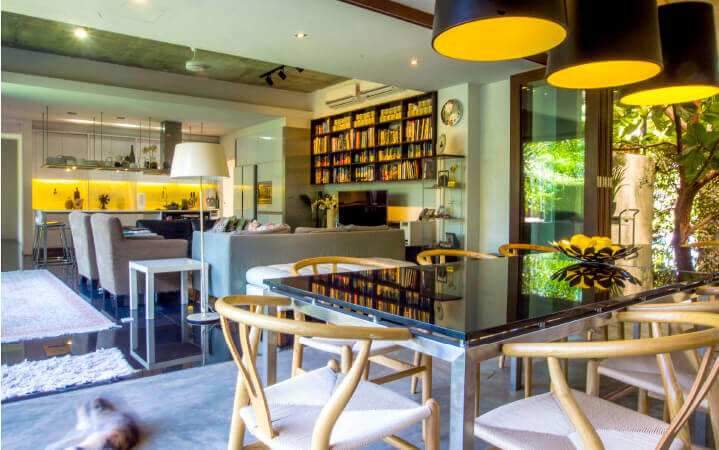 The inner section of the living area is a more intimate space, with plush sofas, books and memorabilia from the family’s travels. This area can be partitioned, if need be, using foldable wood and glass panels. 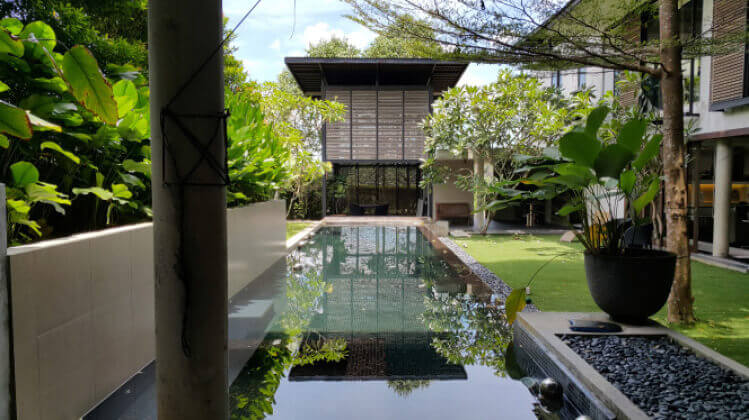 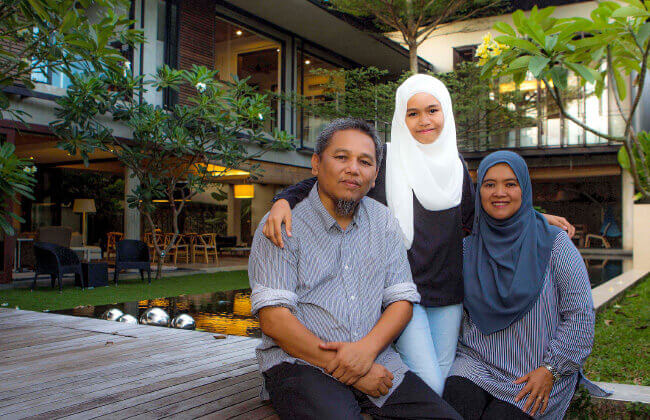 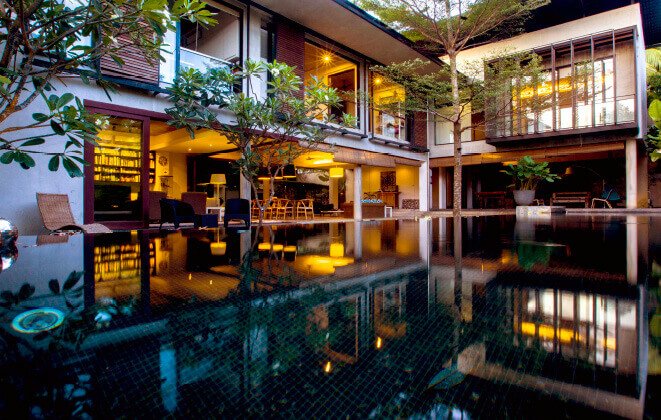 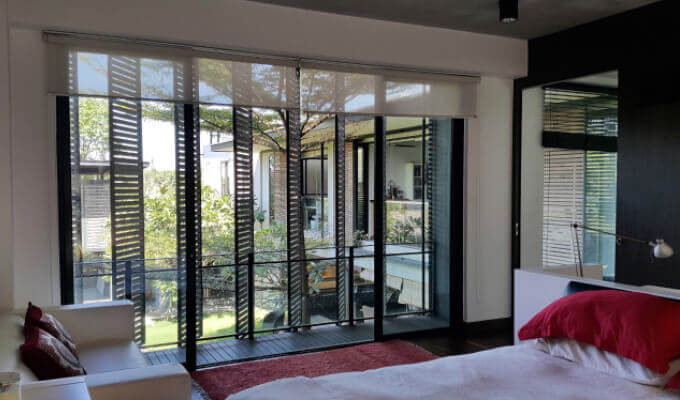 Razin likens the bedrooms to putting beds on a balcony, when the bedroom windows are fully opened. One side of the room wall disappears, giving maximum semi-outdoor experience while providing a lovely view of the lap pool. 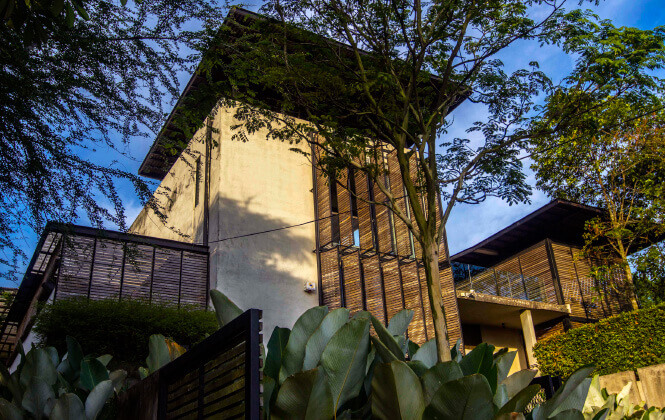 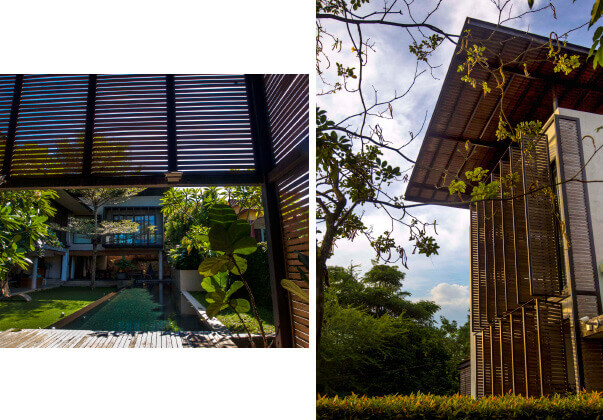 Many can only dream of living in a resort-like setting but this is a reality for Ar Md Razin Mahmood, his wife Noorlezah Md Jaafar and their family. They wake up in a tropical paradise every day.

Their spacious house is located slightly off Jalan Denai in Johor Baru and a sharp turn off the main road eventually leads us to Jalan Denai 10. There is a wide porch and lots of greenery at one of the two entrances that we arrive at. It is linked to Razin’s practice, Razin Architects, located next door to the residence. This is where Razin and his wife Norlezah work together.

The land for the office — known as Denai SOHO — was acquired about two years after the completion of the house.

The second entrance leads up some stairs to a landing that draws inspiration from the serambi of a rumah kampung. The stairs, Razin tells us, are a contemporary take on the stilts of a wooden house.

The residence is affectionately referred to as Denai 10, a play on the number of the house and the street. Barely visible behind the natural landscaping, its open living area beckons from beyond. The entire lower floor of the house has no walls, with only the furniture — an interesting mix of old and new, mass-produced and custom-made — acting as a divider of sorts, demarcating the various spaces. The choice of furniture, from the granite-top dining table to the rattan chairs, does not indicate a particular theme but it is in this diversity that the beauty of the home lies.

Razin jokes that “some of the furniture was purposely made extra-heavy so it would be difficult to steal!” He was referring to the openness of the space. The couple, who have been married for 25 years — almost half their lives, they remark mid-interview — had met in college in Louisiana, the US, where he was studying architecture and she, mathematics.

Is Denai 10 their dream home? “We wanted something practical. We wanted to have a special place that we loved.” As an architect, he noticed that people tend to design houses with their guests in mind and want to keep their home spick and span in preparation to receive guests. “However, I see that some of the living spaces in houses are hardly used! So, when we started designing this house, we decided it would be for us as a family but at the same time, we would still have an impressive place for guests.”

This does not mean the couple does not entertain. “We find reasons to entertain!” Razin chuckles.

The open design of the house does not only let in ample natural light but is also ideal for gatherings. The design, we are told, was also inspired by a client and friend of the couple who enjoys our tropical climate.

The living area looks out to a swimming pool and separating the two is a vast lawn, which is a favourite hang out for the family’s three Persian cats. More trees and shrubs surround the pool and lawn, enhancing the feel of a tropical paradise.

The kitchen is given pride of place in the home. “We feel the kitchen is the heart of the house,” says Razin while Noorlezah adds that she cooks less now because four of their five children, Nadhira, Najiha, Najwa and Aiman Nazrin, have flown the nest. Their youngest, Naseha, will likely enrol in a boarding school soon.

Most of their children may have left to set up their own families and pursue their dreams but Razin tells us it is quite a party when everyone gathers for Hari Raya and other special occasions. Not too long ago, the akad nikah of eldest daughter Nadhira was held in the house and both of them recall the happy occasion with much fondness.

“Luxury is not about the materials used or the workmanship. It is about experiences and feel-good spaces,” says Razin, who, as an architect, strongly believes that perfection is overrated.

Following this philosophy, the house features bare cement ceilings, similar to the industrial design theme that is currently popular. But considering that this house was designed and built in 2008, it was definitely ahead of its time. “People who came to our house used to wonder when we were going to complete the ceiling and even the contractors were sceptical when we told them we wanted the finished product to look that way,” Razin tells us as we tour the house.

The stairs that lead up to the upper floor — which houses bedrooms, an AV room and a family room-cum-workspace — and to the underground garage and storage area are concrete too. The rooms are minimalist in design and the furnishings throughout the residence boast a lot of wood elements. Large glass panels are used in place of walls, allowing the family to truly enjoy their lush surroundings.

A top-notch alarm system, CCTV cameras and tempered glass address security concerns arising from an open layout. Meanwhile, hidden in a corner of the kitchen is a foldable wood and glass screen that provides the option to close a portion of the house, should the need arise.

“It is not easy to maintain the [cleanliness of the] house,” Noorlezah laughs. The living area gets dusty quickly and the dead leaves from the trees need to be swept every day, she says. Perhaps, this sacrifice is negated by their quaint living environment. “When it rains, I like to sit here and listen to the sound of the raindrops,” Razin  says, summing up his favourite experience.