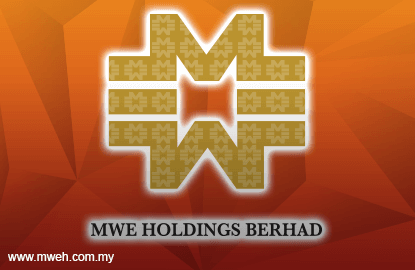 KUALA LUMPUR (Nov 30): MWE Holdings Bhd has received a takeover offer from Tan Sri Surin Upatkoon, via his private vehicle Pinjaya Sdn Bhd, to acquire its entire business and undertaking, including all assets and liabilities, for RM391.4 million of RM1.70 per share.

In a filing with Bursa Malaysia today, MWE said the purchase consideration will be satisfied by way of RM267.49 million cash, and a deferred amount of RM123.91 million left owing by Pinjaya to MWE.

Pinjaya proposed that upon completion of the acquisition, MWE will declare a distribution via a special dividend of RM1.70 per share as a capital repayment exercise, and thereafter the existing MWE shares will be cancelled.

"Upon completion of the proposed distribution, it is proposed that a delisting of MWE be implemented," one of the terms of offer read.

Simultaneously with the proposed distribution, MWE will issue two new shares to Pinjaya with an issue price of RM1 each, and the former's share capital will be reduced to RM2 comprising two shares, which will be wholly owned by Pinjaya.

Pinjaya owns a 30.8% stake in MWE, while Upatkoon owns 0.34% direct stake and 32.62% indirect stake in the garments manufacturer.

MWE manufactures garments for customers, such as Nike, Lacoste, Oshkosh and Izod, and is also involved in property development, manufacturing and sale of electronic products, share registration, management, insurance agency, nominee services, and trading in optical and general products.

The filing said Upatkoon and persons acting in concert with him would be entitled to the special dividend under the proposed distribution.

However, Pinjaya proposed that the entitlement will not be paid in cash, but will be set off against the deferred amount of RM123.91 million.

The takeover offer will require the approval of MWE's board of directors (save for Upatkoon), shareholders at an extraordinary general meeting, and existing financiers.

MWE's filing showed that the offer remains open for acceptance until Dec 10.

The group's board said they will be appointing the relevant advisers before deciding on the next course of action in respect of the offer.