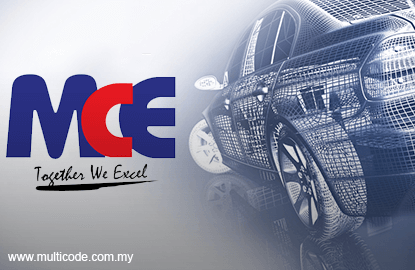 The supply of these parts, said Multi-Code, is expected to begin in the second and third quarters of its financial year ending July 31, 2016.

The estimated initial investment outlay was RM1.55 million, it added.

Multi-Code is principally involved in the manufacturing and supply of car alarm systems, central locking and power window regulators. In FY15, it reported an audited net loss of RM1.07 million or 2.42 sen a share, while revenue came in at RM90.03 million.

The increase in revenue was mainly due to high demand for original equipment manufacturer (OEM) products in the quarter under review, it added.

On prospects, it said it is facing a slowdown in demand from its OEM customers in an increasing cost environment that has been compounded by the weakening ringgit and the implementation of the goods and services tax.

"The group will continue its efforts to mitigate the increasing costs. The board is cautious of the challenging operating conditions of the automotive sector," it added.

Shares of Multi-Code closed 1 sen or 1.2% higher at 84 sen today, for a market capitalisation RM36.9 million.