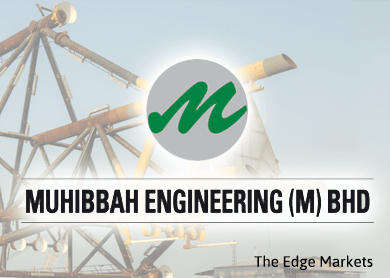 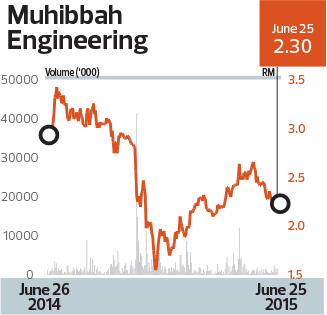 IN a bid to maintain a healthy order book, construction outfit Muhibbah Engineering (M) Bhd is looking to expand the capability of its shipyard division by venturing into the maritime defence sector.

“Boustead will be very busy in the next few years, so they have agreed that the [Royal Malaysian] Navy pass some of its jobs to other yards,” Mac says, in reference to BHIC’s

According to BHIC’s (fundamental: 0.45: valuation: 0.30) 2014 annual report, the construction of the first of the six ships will begin this year at its shipyard in Lumut, Perak, with a 2019 delivery date. The rest will be delivered at intervals thereafter.

“We won’t be helping Boustead. It is going to be more of a spillover of emergency repair works on naval vessels [which BHIC will not be able to take on as its yard activity increases].

“As far as we are concerned, our shipyard can carry out maintenance for anyone,” says Mac.

When asked if Muhibbah (fundamental: 1.10; valuation: 0.80) would be able to take on some of the work to build the LCS, he says, “We believe that Boustead is a national asset, so we don’t want to disturb them. However, if they say they can’t handle all the work, we can take over some of it.”

Muhibbah’s 73-acre shipyard in Pulau Indah, Klang, has the capability to build vessels up to 120m long or 10,000 deadweight tonnes. Since it started operations in 1996, the shipyard has built more than 120 vessels, including offshore support vessels (OSVs).

In comparison, BHIC has three shipyards — in Lumut (120 acres), on Pulau Jerejak, Penang (26 acres) and in Langkawi, Kedah (20 acres). The Lumut and Jerejak yards are engaged in building, repairing and servicing naval and commercial ships, while the Langkawi facility specialises in servicing luxury yachts.

Although Muhibbah has expressed interest in the maritime defence sector, Mac says the group is still active in the OSV business, despite signs of a glut in the oil and gas support vessel market on the back of weak crude oil prices.

“You’ve got to remember one thing — there are gluts and there are also people with a good reputation. Like Jasa Merin (M) Sdn Bhd, they are still one of our major customers and are one of few OSV owners that have built a good reputation with their clients,” he adds.

“The major players don’t really go for price; they go for quality. They (Jasa Merin) come to us because they know we can deliver quality vessels.”

It is worth noting that Jasa Merin has been in the OSV business for over 25 years, almost as long as Muhibbah has been incorporated. It is 70%-owned by SILK Holdings Bhd (fundamental: 0.20: valuation: 0.30) while the remaining 30% stake is held by Terengganu Inc Sdn Bhd.

According to Mac, the group has secured about RM400 million worth of contracts so far this year. Its current order book of about RM2 billion will keep it busy for two years. “We should be able to maintain our order book. In a good year, we can get over RM1 billion [worth of jobs] and in a bad year, we may get RM600 million to RM800 million, but that’s okay for us. We have always been able to replenish [the order book] with about RM600 million [worth of contracts] a year.

“We also expect to maintain our bottom line, although forex (foreign exchange) will have an impact on us … some divisions may see forex gains and others may see additional costs because of a weaker ringgit.”