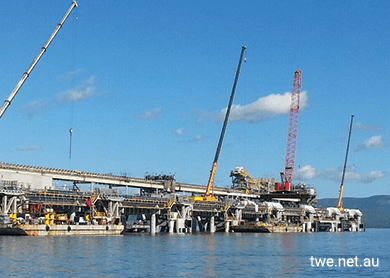 KUALA LUMPUR (June 15): Muhibbah Engineering (M) Bhd has been dragged into a lawsuit in Queensland, Australia, involving its subsidiary’s joint venture (JV) which undertook works at the Wiggins Island Coal Export Terminal at Gladstone there.

Muhibbah Construction had entered the JV with Monadelphous Engineering Pty Ltd to build an approach jetty and ship berth, as well as a shiploader associated with the Wiggins Island Coal Export Terminal.

Muhibbah Engineering said the claim relates to two MMM contracts and associated costs totalling A$130 million related to the project, the majority of which include those paid to MMM under Building and Construction Industry Payment Act 2004 (Qld) (BCIPA) and variations previously approved by WICET.

"MMM has to date received payments pursuant to adjudication under the BCIPA for payments relating to the two contracts, totalling approximately A$90 million. MMM expects to submit further claims under the Act,” said Muhibbah Engineering.

The group added that the claim names the MMM JV parties as defendants, along with each of the respective parent companies.

“Further, the company (Muhibbah Engineering) will pursue a counterclaim through MMM in excess of A$200 million and further claims are being compiled to recover costs associated with changes in scope and nature of the works.

“The company considers MMM has good grounds for making such claims," it added.

Work at the Wiggins Island Coal Export Terminal is completed and the JV has been granted practical completion.

In October last year, WICET chief executive Robert Barnes was reported as saying by The Sydney Morning Herald that several multi-million dollar claims were lodged by MMM under the under the BCIPA, which could delay the completion of the coal terminal.

The report had also stated that in June last year, the Australian Building & Construction Dispute Resolution Service ruled in a 108-page decision that WICET owed MMM A$65.6 million after a submission of A$107 million in claims. These reportedly include variations related to wharf plans, lashing of concrete for shipping, marine spotters, rehandling of steelworks and inclement weather.

It was also reported that the coal terminal had been aiming to start exporting coal in November last year, and construction of the terminal began in September 2011.