MUHIBBAH ENGINEERING (M) BHD is in the last stage of negotiations with Técnicas Reunidas SA on a RM500 million contract for civil and mechanical works and fabrication in Petroliam Nasional Bhd’s refinery and petrochemical integrated development (RAPID) project within the Pengerang Integrated Complex in Johor, industry sources say.

The Edge understands that the contract is a part of the Spanish company’s RM4 billion engineering, procurement, construction and commissioning (EPCC) job in the refinery and steam cracker component of RAPID that was awarded in August this year.

“If all goes well, Muhibbah could seal part of the EPCC job before year-end,” a source says.

There are scant details of the potential award by Técnicas Reunidas but the contract could nudge Muhibbah’s order book to an all-time high of almost RM2.5 billion.

According to Kenanga Research, Muhibbah’s outstanding order book stands at RM1.93 billion, comprising RM875 million from construction, RM1.02 billion from its crane division (Favelle Favco Bhd) and RM38 million from its shipyard division. This will keep the group busy until 2016.

Kenanga, which has a “buy” recommendation on the group, says Muhibbah’s year-to-date contract wins amount to RM378 million or 54% of its financial year 2014 (FY2014) new jobs assumption of RM700 million. “We reiterate our view that the remaining RM300 million to RM500 million new jobs will be secured by the group before end-FY2014, likely from oil and gas, that is Petronas-related projects such as RAPID.”

This indicates that the award of the EPCC contract by Técnicas Reunidas is not entirely unexpected.

In its notes accompanying its financial results for the first half of this year, Muhibbah says, “The group, with its experience and track record in the oil and gas sector, is hopeful of securing some of the related oil and gas engineering and construction works from RAPID.”

It is worth noting that Muhibbah has bulked up its order book with several contracts secured this year. Last month, it won a RM157 million job for the design, construction and completion of Phase 1 of the conveyor system facility for the proposed Samalaju Port project in Bintulu, Sarawak, from Bintulu Port Holdings Bhd.

Also in September, the company was awarded a two-year, RM100 million contract for the construction, fabrication and installation of the new Aroma Chemical Complex along with relevant facilities for the Lemongrass project in Kuantan, Pahang, by BASF Petronas Chemicals Sdn Bhd.

In August, Muhibbah got a RM30 million contract for the fabrication, loadout and seafastening of jackets, piles and appurtenances for a central processing platform to be installed on Vestigo’s Tembikai oilfield off the peninsula.

In May, it bagged from Samsung Engineering (M) Sdn Bhd the RM61.4 million civil and building works for the Terengganu Gas Terminal project. A few months before that, it was awarded a RM30 million steel structure erection job by JGC (M) Sdn Bhd for Petronas’ LNG Train 9 project in Bintulu.

Interestingly enough, Muhibbah may be involved in the fabrication aspect of the RAPID contract. In June last year, Petronas licensed it as an approved supplier for “offshore facilities construction-major onshore fabrication”.

The licence has put Muhibbah on a whole new level as it can now bid for and participate in construction and fabrication works for Petronas and other major oil companies in the country, which augurs well for its earnings.

For the first half of FY2014 ended June 30, Muhibbah registered a net profit of RM41.1 million on revenue of RM860.1 million. A year ago, net profit was flat at RM40.5 million, although revenue rose 8.4% from the previous corresponding period.

Kenanga estimates Muhibbah’s FY2014 net profit at RM87.4 million and revenue at RM1.62 billion, and has a target price of RM3.55 for the company, which implies a forward price-earnings ratio (PER) of 14.6 times FY2015 earnings. This is still within its mid-sized construction peers’ historical PER of 12 to 15 times. 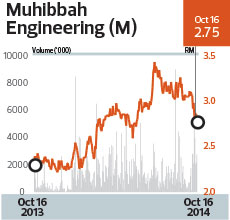 Muhibbah has not been spared the effects of the recent turbulence in the global stock markets and has been spiralling down like other oil and gas stocks. Since hitting its 52-week high of RM3.43 in July this year, Muhibbah’s shares have fallen 19.8%. The counter closed at RM2.75 last Thursday.

Says Kenanga, “We continue to like Muhibbah for its unique business structure that offers flexibility in infrastructure, marine engineering and oil and gas jobs, the ability to leverage its internationally recognised Favelle Favco name and long-term earnings visibility backed by stable and growing recurring income from its concessions.”