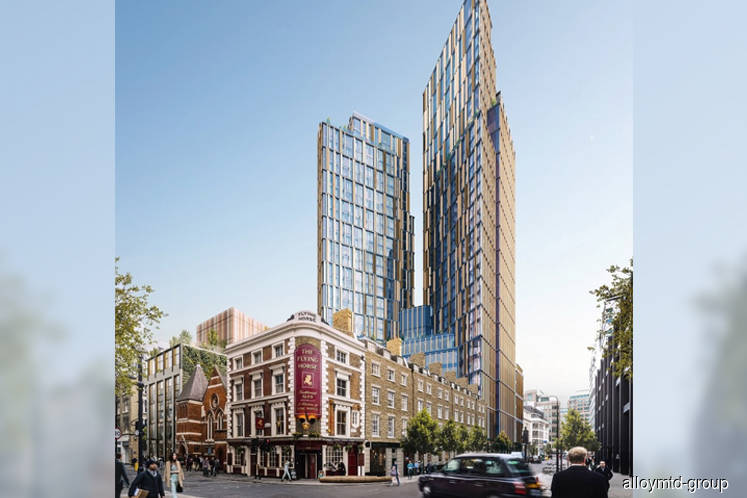 KUALA LUMPUR (Jan 24): The development of One Crown Place by Malaysian’s MTD Group is set to complete by 2021 with the successful completion of the construction phase on the final floor of the 33-storey southernmost building.

MTD Group today announced the topping-out of the project, which it said will be one of London's most notable development.

“Embracing the old-meets-new character of the City of London and Hackney, One Crown Place is a welcome contrast to the capital’s many glass towers, artfully combining original heritage buildings with striking modern architecture from Kohn Pederson Fox,” MTD said in a statement.

MTD was previously-listed on Bursa Malaysia as MTD Capital Bhd. Its owners took the group private in 2011.

The One Crown Place project includes 246 private apartments and a fully restored Georgian terrace, which will be transformed into a 41-room luxury boutique hotel.

It also comprises 140,000 sq ft of premium office space and retail units totaling 7,000 sq ft, will also be delivered as part of the scheme.

“External work on the residential towers is well underway at One Crown Place, revealing the scheme's unique and characterful design, and interior fit-out of the apartments has begun followed by the hotel fit-out later this year,” MTD said.

The scheme is due to complete in the first quarter of 2021.

“We are very pleased to announce the topping-out of this iconic mixed-use development in Central London. This is a major milestone for MTD Group and demonstrates our commitment to delivering this landmark scheme to the highest standards,” said AMTD London Development Co Ltd director Tee Kim Siew.