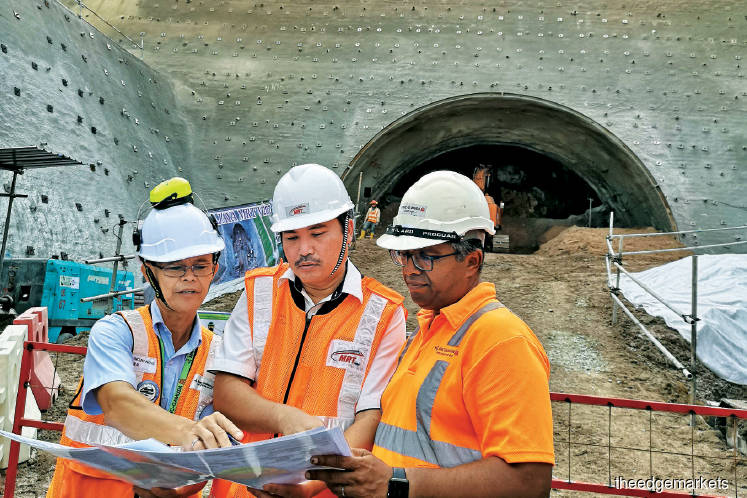 PETALING JAYA: The analysis to reduce the construction cost for the MRT Sungai Buloh-Serdang-Putrajaya line (MRT2) is still ongoing, and Mass Rapid Transit Corp Sdn Bhd (MRT Corp) said it may “take some time” for it to finalise the study.

At a media briefing yesterday, MRT Corp’s MRT2 project director Datuk Amiruddin Ma’aris told reporters that this is to ensure the cost-cutting measures do not affect the project’s safety and functionality.

“We are doing some analysis on what are the elements that can contribute to cost savings, but we have not finalised that assessment yet. We are still studying [the matter],” he said after leading a media entourage on a visit to the MRT2 Taman Universiti construction site at Seri Kembangan yesterday.

“Although cost-cutting is under consideration for now, we need to be careful, in that this initiative should not compromise the railway’s safety and its functionality. The analysis and study must be comprehensive so we will not compromise on these key elements,” he said.

Amiruddin said there is no specific target on the savings from the MRT2. The construction cost was budgeted at RM32 billion.

To date, Amiruddin said 48 tenders under the MRT2 project had been awarded. These civil, station and systems work packages would involve a construction cost of RM30 billion. Meanwhile, there are 20 remaining tenders for work packages such as Multi-Storey Park and Rides that are still ongoing.

In June this year it was reported that MRT Corp chief executive officer Datuk Seri Shahril Mokhtar’s meeting with the Council of Eminent Persons was related to a discussion on ways to reduce the construction cost of MRT2.

During the site visit, Amiruddin said overall, the MRT2 was almost 30% completed as at early July this year. Therefore, he said the project will be able to move into the next construction phase as scheduled. MRT2’s phase one is still on track to achieve its targeted operational date in July 2021.

“We had started the long span viaduct crossover along Jalan Kuala Selangor, while the commencement of track laying works on the main line will start by December 2018.

“With construction work progressing rapidly and on track along the northern elevated alignment, we are confident of completing the viaduct works in time to achieve this milestone.”

Amiruddin said increased construction works can be seen at the southern and Putrajaya elevated sections of MRT2. He also said the mined tunnel works at the first section of the southern elevated alignment in Taman Universiti began in June 2018.

Amiruddin said this section, over a high ground at the Malaysian Agricultural Research and Development Institute (Mardi) area, is the only mined tunnel section of the entire 38.7km of elevated tracks. The mined, and cut and cover tunnels stretch 540m, he added.

“The mined tunnel is a single twin track about 182m. The cut and cover tunnel is a twin cell box structure covering on both sides of the concrete-lined tunnel with a length of about 197m on the upstream (east) side and 161m on the downstream (west) side.”

“We adopted the second and third methods for this section as they are more cost-effective to construct a shorter tunnel, unlike the underground section,” he said.

Param also said the mined tunnel will be constructed using the New Austrian Tunnelling Method with permanent cast in-situ concrete lining, and the entire section is targeted for completion by December 2019.

MRT Corp provided updates such as the project’s bored piling works, pile caps and pier head works are also taking place along the southern and Putrajaya sections, with certain locations such as Equine Park and Cyberjaya already gearing up for the Segmental Box Girder launching by end-July.

Meanwhile, the project’s underground section is progressing well at 33.3% completion.

Amiruddin said currently, there are two TBMs operating along the underground section from Bandar Malaysia to Chan Sow Lin and six TBMs are scheduled to be launched between October and November 2018.

He added that other ongoing works taking place are secant bore piling (SBP), the construction of diaphragm walls, excavation and reinforced concrete works for station boxes and shafts.

Construction work for MRT2, the second line of the Klang Valley MRT project, began in 2015. The MRT2 will serve a population of two million from Sungai Buloh to Serdang and ends at Putrajaya.

With 38.7km elevated tracks and 13.5km underground tunnels, the line has 35 stations. The entire MRT2 will be fully operational by July 2022.