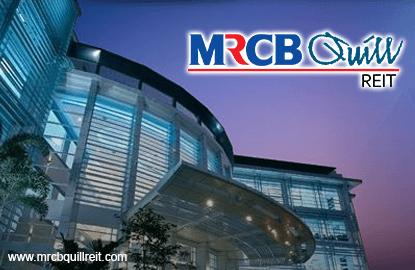 In a statement today, MRCB Quill Management Sdn Bhd (MQM), the manager of MQReit, said the REIT’s property portfolio value increased to RM1.57 billion, after recognising a fair value gain on investment properties of RM6.7 million as at Dec 31, 2015.

"Although the property market outlook in the near term will likely remain challenging as we note an influx of supply into the market, we are confident that MQReit’s portfolio of quality commercial assets will continue to remain resilient, as they have done in the past," said MQM chief executive officer Yong Su-Lin.

She added that scheduled enhancement works will be initiated for a few properties in FY16, namely Quill Building 1-DHL1, Quill Building 4 – DHL 2 and Platinum Sentral.

"As part of our proactive capital management strategy, MQM has commenced negotiations with financial institutions for the refinancing of MQReit’s RM270 million CP/MTN programme, which will be due in September 2016.

"In view of the current rising interest rate environment, we will continue to adopt a pro-active capital management strategies and plan to maintain majority of fixed rate borrowings, as part of our strategy to provide income stability to the trust,” said Yong.