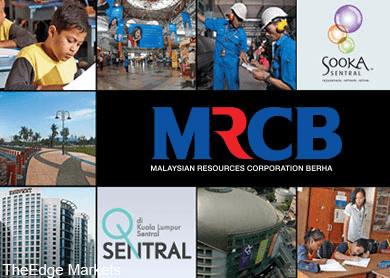 MRCB (fundamental: 1.3; valuation: 0.8) executive vice president Datuk Dell Akbar Khan said development plans for MRCB's only plot of vacant Brickfields land "are still at the drawing board" since the property developer had yet to own the land.

However, Dell Akbar confirmed that it would "most likely be a mixed development featuring a connecting covered walkway to Kuala Lumpur Sentral."

He said MRCB could develop three towers of about 40-storeys each on the tract. The project may comprise residential, commercial and retail portions, according to him.

Dell Akbar was speaking at a press briefing in conjunction with the commencement of the 100 Quarters demolition.

He said MRCB would start demolishing the structures as soon as tomorrow to allay residents' concerns over the area's security.

According to Dell Akbar, MRCB has obtained approval from authorities to undertake the demolition, which would take two months to complete. He said the demolition cost was estimated at RM500,000.

"The land is in the process of being transferred to us. This is in the hands of the government now. Of course, we would like to have the land as soon as possible. There is still no indicator from them when this will happen," said Dell Akbar.

Under MRCB's agreement with the government, MRCB is obliged to develop Little India, the Pine Bazaar and the Ang Seng Quarters enclaves in Brickfields.

Upon completion, the government will transfer to MRCB the ownership of the 1.4ha tract besides a nearby 0.6ha (1.5 acre) site.

At 12.30pm today, MRCB shares settled unchanged at RM1.27 for a market capitalisation of RM2.27 billion.