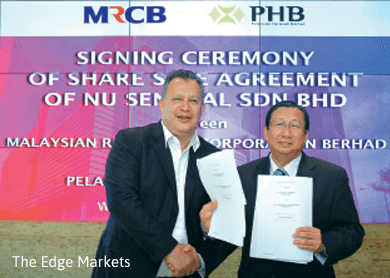 NSSB, currently a 51:49 JV between MRCB and PHB, is an entity that manages and operates the Nu Sentral Mall in Kuala Lumpur Sentral, with a 99-year lease from PHB, which wholly owns the shopping mall.

In a filing with Bursa Malaysia yesterday, MRCB (fundamental: 0.6; valuation: 0.8) said it had entered into a share sale agreement with PHB for the disposal of its 51% interest in NSSB, which comprises 10.2 million shares and 91.8 million non-convertible redeemable preference shares, for RM119.78 million cash.

MRCB said the disposal is part of its macro strategy to monetise non-core assets and to focus its resources on property development, specialised infrastructure and environment projects.

“The board of directors is of the view that the disposal will enable MRCB to better utilise and focus its resources on its core businesses. The cash consideration from the disposal could be reinvested in the core businesses of MRCB, such as property development,” the company said.

MRCB estimates the disposal to be completed by the third quarter of 2015.

“As with other moves that involve our development partners that MRCB has initiated this year, such as a share swap deal we executed with another business partner (DMIA Sdn Bhd), the disposal of MRCB shares in NSSB reflects our larger initiative to enhance strategic focus on our current projects,” MRCB group managing director Tan Sri Mohamad Salim Fateh Din said in a statement yesterday.

On April 1, MRCB announced the share swap agreement, in which the company will transfer to DMIA its 100% stake in Lotus Terrain Sdn Bhd, which undertakes the double tracking of railway lines between Rawang and Salak Selatan and the sector between Salak Selatan, Seremban and SPK Pelabuhan Kelang.

In exchange, DMIA will transfer its 30% stake in Country Annexe Sdn Bhd (CASB) to MRCB, raising the latter’s interest in CASB to 100%. CASB is undertaking a mixed development project on a 4.92-acre (1.99ha) land in Brickfields, Kuala Lumpur, under a privatisation agreement with the federal government. 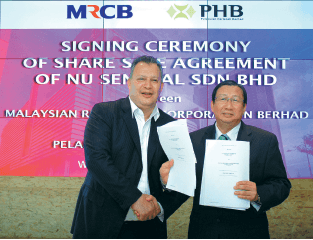