Oil and gas sector
Maintain neutral: In his opening speech at the Oil and Gas Financial Forum (OGFF) Dr Shahreen Madros, executive director of Malaysia Petroleum Resources Corp (MPRC), highlighted that it aims to propel Malaysia into being the regional oil and gas (O&G) hub through further developments in the downstream segment, in contrast to its heavy focus on upstream business in the past.

It was also mentioned that the human capital and technology level of the industry have to be improved further with more support from the financial market and consolidation in the industry.

While it cannot be denied that the oil price slump will cause a dent in government revenue, Bank Negara Malaysia has indicated that it is not all gloom as the economy had actually made inroads into diversifying away from O&G revenue in recent years.

With regard to concerns about a drastic slowdown in liquefied natural gas (LNG) sales due to Japan’s (MPRC’s biggest client) nuclear power generation restart, we understand that only three out of a total of 80 to 90 reactors are involved that require a lead time of one to two years, and this is not expected to cause any significant adverse impact on LNG demand in the medium term.

Instead of a V-shaped recovery of oil prices as in the 2009 crash, many of the speakers concurred that the current level of oil prices could stay for a while given the Organization of the Petroleum Exporting Countries’ decision to maintain its production level, at least in the near term, and increasing supply from the shale oil revolution.

Even if oil prices spike up again, the additional supply from shale would come onstream with only months of lead time, therefore capping the upside. In the current environment, it is crucial for industry players to adapt to the new environment to emphasise efficiency and competitiveness compared with the excesses seen in the industry during the era of oil prices above US$100 per barrel (bbl).

Putting it into perspective, the unit cost of oil has surged to US$43 (per bbl from merely US$7 four to five years ago according to Boston Consulting Group. Service providers and oil producers’ margins are expected to shrink and normalise at a lower level for the whole industry to be sustainable under the current oil price scenario. This is in line with our view of more near-term hiccups expected in the industry while the outlook for the long run is still positive.

Several speakers in the forum actually sounded that financing is still ample in the O&G industry despite the lower oil prices. Daniel Mello, head of energy project finance and metals and mining Asia-Pacific at Societe General also mentioned that he has seen the industry functioning even at an oil price of US$20 per bbl.

However, financing under the current scenario will be more stringent than before with only fundamentally robust companies being able to secure financing at reasonable costs. This is not entirely bad news for the market as it indicates that financing is now more prudent with capital allocated only to companies with strong fundamentals, therefore, potentially removing excesses in the industry in the long run.

In general, the market sentiment of industry players and financiers is largely in line with our view of oil prices staying at current levels for a while. We believe it is time for the O&G industry to consolidate and become more efficient.

Only players with strong fundamentals and financial standing will endure the near-term headwinds expected in the industry. At the moment, we believe offshore support vessel, fabrication and drilling players are facing the highest near-term earnings risks due to incoming rate revisions and delays in projects.

Maintenance-focused services — like Uzma Bhd (market perform; target price [TP]: RM2.58) and floating production storage and offloading players, such as Yinson Holdings Bhd (outperform; TP: RM3.86) — are in a better position to withstand the slowdown in the industry due to the more resilient nature of their businesses. — Kenanga Research, June 17 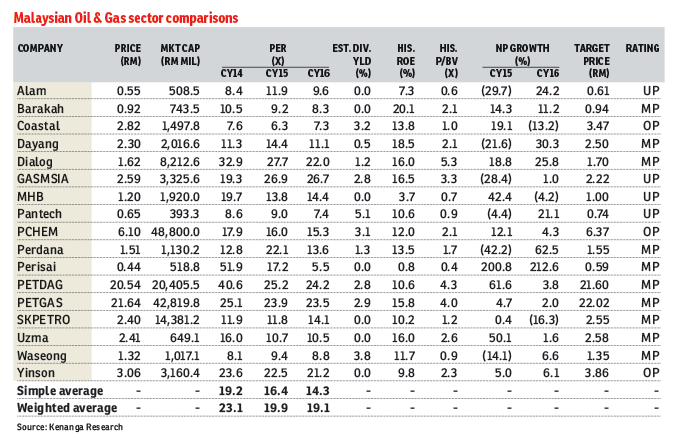