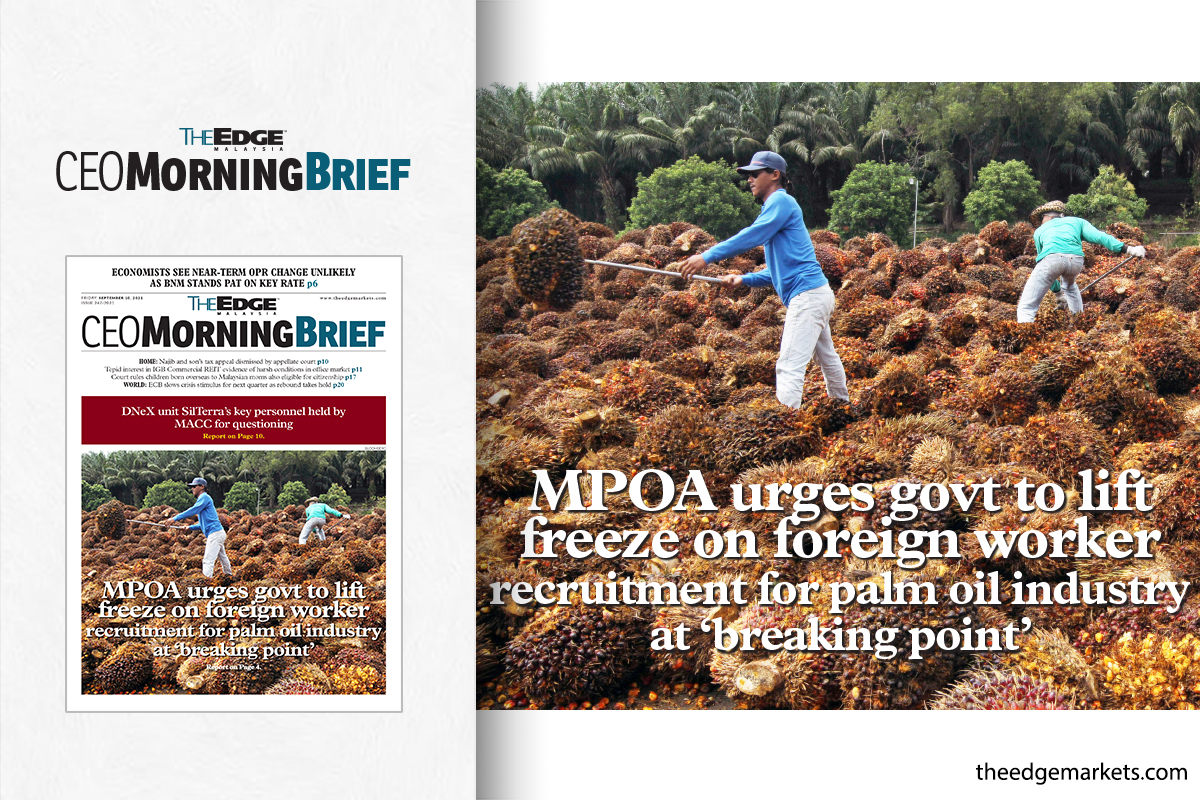 KUALA LUMPUR (Sept 9): Palm oil planters have urged the government to unfreeze the recruitment of foreign workers as an acute shortage has and would continue to result in loss of revenue for planters and income to the government due to loss in palm oil yield, according to Malaysian Palm Oil Association (MPOA) chief executive officer (CEO) Datuk Mohd Nageeb Wahab.

“Our single biggest problem today is the acute shortage of workers, namely harvesters ... I would dare say the shortage since the [foreign labour] intake freeze took effect in March 2020 has increased to more than 75,000 workers. This shortage translates into an alarming 20% to 30% shortfall in our potential production. In 2020, as a result of this shortfall, the industry's loss of revenue is estimated at about RM10 billion to RM12 billion on the back of an average crude palm oil (CPO) price of around RM2,685 per metric ton (MT).

“That big reduction in revenue resulted in the reduced contribution of about RM1 billion to the government. And in spite of that, total taxes paid out by the industry amounted to about RM5.2 billion last year,” Mohd Nageeb said during the virtually-held National Recovery Summit today.

According to him, the palm oil sector is at the “breaking point'', and he warned that the loss of production will quickly escalate to much higher numbers.

If the situation continues to be left unchecked, he stressed, the palm oil industry may not be able to compete with that of Malaysia's neighbours by virtue of our higher cost of sales and wastage.

“The industry is enjoying a long bullish run, with CPO prices averaging at more than RM4,000 per MT in the first half of 2021 (1H21). This is unprecedented and the highest-ever rate mainly due to the short supply of edible oil worldwide due to weather factors. And we expect this trend to prevail through 2022.

“And as a result, you can see plantation companies reporting very good returns despite lower yields and higher costs, brought about by the continued shortage of workers. We could have actually done much better if only we could actually optimise our production numbers.

“But even with much lower production and returns, the expected total effective tax, levy and cess paid to the government will be in the range of RM9 billion to RM12 billion for 2022. That 20 to 30% drop in production (estimation) will cause the government a [likely] opportunity loss to collect additional taxes of between RM1.5 billion and RM2 billion at current [CPO] prices,” he stressed.

To address the shortage and high dependency on foreign workers,  Mohd Nageeb said the industry, together with the relevant government agencies, had embarked on many initiatives, with the top agenda to accelerate automation and mechanisation transformation plans for the oil palm sector to reduce reliance on manual and foreign workers.

But he also said these initiatives are still in progress and the industry still needs labour to work in plantation fields.

While Mohd Nageeb disagreed that hiring foreign labour is cheaper, pointing out that high costs are involved in recruiting and training them, planters would have to continue to hire them as attempts to hire local workers have not been very successful so far due to lack of interest.

“I have received many comments on why we are not employing locals in place of guest workers to address the shortage. We actually would love to have locals, but our efforts to hire locals have not been very successful. They seem to shun this industry, and deem this industry as 4D — dirty, difficult, dangerous and demeaning. It is not about the money as we do offer lucrative total packages, but this does not seem to attract them, especially for harvesting. However, we have not given up hope, and shall continue trying to entice them,” he said.

"We plead to the government to unfreeze the recruitment of guest workers to enable the industry to optimise production at a profit and share its wealth with the nation in the recovery plan," he added.