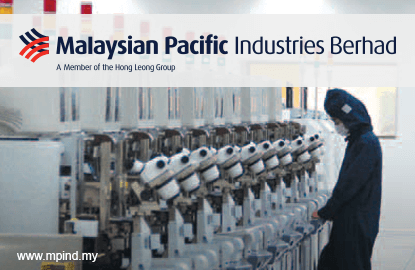 KUALA LUMPUR: Semiconductor company Malaysian Pacific Industries Bhd’s (MPI) net profit rose 136% to RM46.92 million in the first quarter ended Sept 30, 2015 (1QFY16) from RM19.91 million in 1QFY15, largely due to the strengthening of the US dollar against the ringgit, and lower material costs due to lower commodity prices.

According to its Bursa Malaysia announcement yesterday, the group recorded a gain of RM6.64 million on foreign exchange for the quarter. It also announced an interim dividend of eight sen per share for the financial year ending June 30, 2016 (FY16), payable on Dec 18. Meanwhile, its revenue rose 18% to RM386.65 million in 1QFY16 from RM327.72 million in 1QFY15.

“Revenue growth was higher for all segments with Asia, the US and Europe increasing by 13%, 36% and 14% respectively, against the corresponding quarter of the preceding year,” it said.

MPI expects the operating environment to remain challenging in the coming quarters, due to slower growth in the semiconductor industry and the uncertainty in the global economy.