MPHB Capital Bhd
(Dec 19, RM2.12)
Maintain “buy” with a target price of RM2.85: MPHB’s wholly-owned Multi-Purpose Capital Holdings has entered into a conditional share purchase agreement with Generali Asia NV for the disposal of a 49% stake in Multi-Purpose Insurans as well as a call-and-put option agreement with Generali Asia in relation to the disposal.

Generali Asia is a 100% indirect subsidiary of Assicurazioni Generali SpA, one of the largest global insurance providers with €66 billion (RM281 billion) total premium income in 2013. Generali is listed on Borsa Italiana with a market capitalisation exceeding €25 billion. Generali group occupies a leadership position in West European markets and an increasingly important place in markets in Central Eastern Europe and Asia.

The 49% stake disposal for RM356 million values Multi-Purpose Insurans at 2.45 times 2013 price-to-book value (P/BV). The disposal is estimated to result in a gain of about RM209 million. We deem the valuation as attractive, given that most mergers and acqusitions for local general insurance companies over the past five years have lower valuations.

The second tranche of a 21% stake disposal, which could take place in the second half of 2015, is estimated to fetch RM160 million to RM170 million, based on current book value. This partnership would allow Multi-Purpose Insurans, which has less than 4% of the local market, to ride Generali Asia’s strong branding to develop a portfolio of international clientele with a widened customer base. The tie-up would also make Multi-Purpose Insurans more competitive and increase its capacity to underwrite more insurance products.

MPHB will no doubt face an immediate earnings shortfall with the disposal of the 49% stake. We expect Multi-Purpose Insurans’ net profit to drop 27% to 34% year-on-year in 2015 and 2016 on the back of faster growth in Multi-Purpose Insurans post strategic tie-up. However, MPHB will recoup the loss in interest income from the disposal proceeds (about RM10 million per year based on 3% interest rate and assuming MPHB does not use the proceeds for other purposes) and upcoming contributions from property development.

We estimate MPHB would boost its cash level to RM550 million to RM570 million (or 77 sen to 80 sen per share) after selling the 49% Multi-Purpose Insurans stake. However, due to the contingent capital required under the Financial Services Act, which governs MPHB and its holding company, we believe it is unlikely MPHB will declare a dividend before further paring down its stake in Multi-Purpose Insurans to become a minority shareholder. The additional stake sale would likely materialise in the second half of 2015 and would pave way for MPHB to reward shareholders via capital management. All in, we remain positive on MPHB which should be viewed as an asset play instead of an earnings play.

The transaction is subject to approval from MPHB’s shareholders and is expected to be completed by the first quarter of 2015 (1Q15).

We cut our 2015 and 2016 net profit forecasts by 19% and 14% respectively to reflect the lower insurance earnings after the stake disposal.

Maintain “buy” with a higher target price of RM2.85 (previously RM2.80), assuming a 20% discount to our sum-of-parts valuation of RM3.54 per share. The higher target price is due to the adjustment of Multi-Purpose Insurans’ P/BV from 2.3 times to 2.45 times. We expect MPHB to have another key catalyst after 1Q15, which is to rope in an established joint-venture partner to redevelop its Flamingo Hotel by The Lake in Ampang into a planned integrated property development. — UOB Kay Hian Research, Dec 19 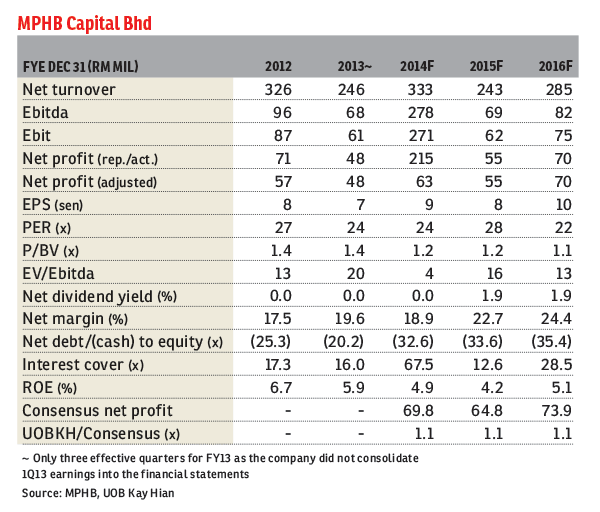