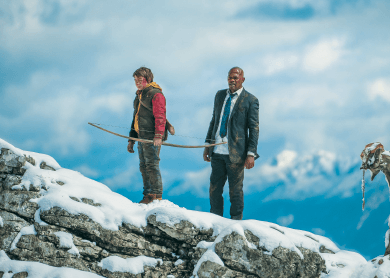 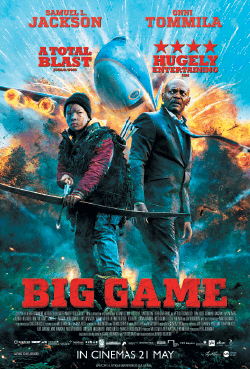 It is said that J R R Tolkien’s inspiration for the creation of the Elvish languages in the Lord of the Rings legendarium was the melodic language of Finland. He had been so taken by its people, culture and the pronunciation and nuances of Finnish that it inspired him to create a language from scratch — a fictional language now spoken by hundreds of Tolkien fans across the globe.

Big Game pays tribute to the vast, untarnished natural beauty of Finland, from its pristine wilderness to its hunting culture, and features the Finnish language more prominently than any other blockbuster film in recent memory. Its integral storyline featuring Jackson as the President of the United States almost takes a backseat to the breathtaking aerial shots of Finland’s forests and mountain ranges.

The movie tells the tale of Oskari (Tommila), a 13-year-old Finnish boy who has to undergo a coming-of-age ritual that his people have observed for generations — a hunt in the forest using only bows and arrows, with the goal of obtaining bragging rights as the hunter who brings down the biggest prey.

Far from being the big, brave seasoned hunter that his father is, Oskari is a slightly built young lad who can’t even shoot an arrow at a target five feet away. Fearing the worst, friends of Oskari’s father try to talk him out of venturing into the forest on his own to undertake this journey, but his father insists that Oskari is perfectly capable of taking care of himself.

At the same time, thousands of feet up in the sky, Air Force One is carrying the US president William “Bill” Alan Moore (Jackson) to a summit in Helsinki. Unbeknown to the president, a plot to capture him is underway and the plane is soon hijacked and crashes into the wilderness while the president manages to get to safety in a specially-made escape pod.

Deep in the forest, the pod is discovered by Oskari, whom at first mistakes it for an alien object. The two become fast friends after a tricky introduction, and soon, the president finds himself learning the art of being tough, not just acting tough.

Big Game is in essence, a coming of age story, not just for Oskari, but also for Bill, who has never had to brave freezing forests or life on the run before. Oskari, on the other hand, finally figures out his place in his culture — not as a formidable hunter, but as a warrior whose wit, courage and heart propel him to greatness.

There are genuinely funny one-liners here and there, and Tommila does a respectable job portraying the conflicted character of Oskari. Jackson’s portrayal of President Bill, however, isn’t nearly as exciting. It is a bit difficult to root for a president who comes across as a kind of a loser — he can barely get in any punches and kicks while fighting off enemies, nor is he particularly intelligent.

Thankfully, though, they are both flanked by tough and interesting characters who add spice to the story, even if they are mostly one-dimensional baddies. Instead of making another movie with your run-of-the-mill Middle Eastern terrorists, the writers of Big Game decided to make the bad guys lone wolves with ulterior motives that deviate from the usual religion, race or nationality plotlines. The twist at the end is also rather unexpected.

All in all, Big Game is a worthwhile watch for action movie fans with its smorgasbord of fighting, shooting, bombs and futuristic military devices.