Most Malaysian employees can expect pay rise this year

HERE’s a bit of good news. Some 43% of employees in Malaysia can expect their salaries to rise 6% or more in their next review. This is higher than in 2014 when only 31% of employers surveyed by international recruitment firm Hays increased salaries by 6% to 10%.

This year, employees can expect some form of upward salary adjustment, driven by steady hiring demand across most sectors.

Hays recently released its 2015 Hays Salary Guide, which outlines salary and hiring trends for over 1,200 corporate roles in Malaysia, Singapore, Hong Kong, China and Japan. The report was based on a survey of 2,361 employers who oversee a collective four million employees.

“Our guide shows that hiring expectations remain steady across Asia despite the talent shortage,” says Christine Wright, managing director of Hays in Asia, in a statement.

“Employers in all five of our surveyed countries are seeing a gap — some more significant than others — between the skills that they are looking for and those available in the local labour market.”

Here is the not-so-good news. Although more people can expect a salary increase, Hays notes that candidates “should not expect salary increases that reflect this level of demand”.

According to the salary guide, only 10% of Malaysian employers will offer employees salary revisions of more than 10% of current wages (see chart).

Nevertheless, Wright points out that there are great opportunities for job candidates in the current market. “Savvy job-seekers are taking advantage of Asia’s tight talent market to secure roles that offer career progression, which in the long term will ultimately lead to a higher salary.”

What’s happening is that employers are not just using higher salaries to attract talent. “They are also offering extra benefits to secure their preferred candidate. Performance-related bonuses are used to reward top performers,” says Hays.

The most popular benefit offered by employers in Malaysia is healthcare (64%), followed by car or car allowance (58%) and life insurance (47%).

Bonuses remain the preferred way of rewarding staff. Hays found that 51% of employers across Asia plan to pay out bonuses to more than half their staff. These bonuses are related to employee and employer performance.

“This shows that rather than give across-the-board salary increases, employers are using bonuses based on performance to reward their top talent. Just 11% of employers said bonuses are guaranteed,” says Hays.

Of the five Asian countries surveyed by Hays, salary increases in Malaysia are the second highest this year, after China.

However, Salary increases in Hong Kong remain “much more subdued” than in mainland China, Hays notes.

The majority of employers in Hong Kong, specifically 64%, increased salaries by between 3% and 6% last year. This year, 63% are expecting that level of increase.

The scenario is the same in Singapore — about 54% of employers say they will increase salaries by 3% to 6% this year. This is lower than in 2014 when 59% of employers indicated that they would raise wages by between 3% and 6%.

Among the five countries surveyed, the smallest salary increase was seen in Japan. Last year, the majority of employers in Japan — about 56% — increased salaries less than 3% while 15% of employers gave no adjustments at all.

“The situation is similar for the year ahead,” says Hays.

In other key findings, the salary guide found that employers are generally upbeat about the business outlook for this year.

Hays found that 72% of employers expect a rise in business activity this year while 48% expect to hire more permanent staff over the year.

However, almost half of the employers (45%) believe that skills shortage has the potential to hamper the effective operation of their business or department.

“Despite the focus on localising the workforce, 65% of employers will consider employing or sponsoring qualified overseas or expatriate candidates in skill-short areas.

“This is indicative of Asia’s severe talent mismatch. It also suggests that employers across Asia need to innovate to attract candidates in a tight labour market,” says Hays. 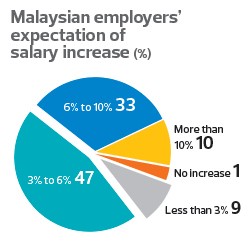 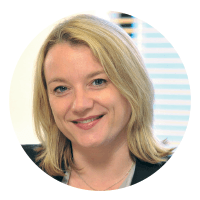