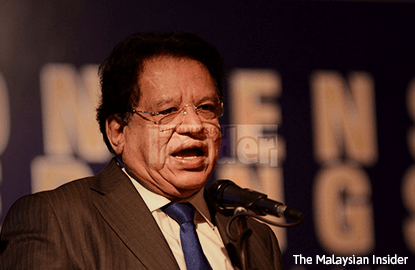 There will be others, he said, besides the nine branch chiefs in the Teluk Kemang division in Negri Sembilan, who last month said they had lost confidence in Najib's leadership and called for his resignation.

"Many more will be brought to the disciplinary board... all these branch chiefs who have no discipline.

"I need people who are disciplined in the party. Better to be few in number but who are committed, than to have many members with an agenda to destroy the country and the party. That is my stand," he told the media in Kuala Lumpur today.

Tengku Adnan was asked to respond to a new movement launched by party branch chiefs, the "Coalition of Branch Chiefs Malaysia" (GKCM) to pressure Najib to resign as party president.

He said their views against Najib were individual statements and did not represent the branches they represented.

"If we follow the party constitution, they have to hold a meeting with two-thirds of the branch committee present and move a motion against the party president.

"The motion then has to be brought to a meeting of the branch at which two-thirds of members must be present. It has to be approved there and then brought up to the division, and the division will then decide," Tengku Adnan said.

The GKCM movement last week said Najib should step down so that Umno, as the lead ruling Malay party, would not be destroyed.

One of the branch chiefs in the movement, Kamarul Azman Habibur Rahman, who also heads the Taman TKK branch, said the group was not sponsored or paid by anyone.

GKCM also claimed that "hundreds" of Umno branches nationwide supported the movement but did not want to identify themselves for safety concerns.

Party leaders have said that most of the 191 divisions are supportive of Najib and will not be raising any motions against the president at the annual general assembly next week.

But at the grassroots beneath the division level, branch members have reportedly complained that their views about the leadership were being blocked from reaching the upper echelons of the party. – The Malaysian Insider