More of Taman Rimba Kiara to be gazetted as development land in KL Structure Plan? 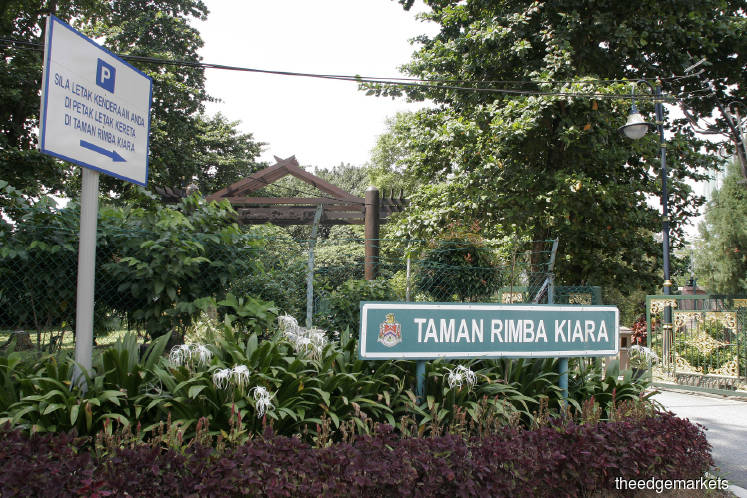 EVEN as the case involving the controversial development of 3.24ha of Taman Rimba Kiara is being played out in the Court of Appeal, Taman Tun Dr Ismail residents have learnt of plans to turn more parcels of the city park into a development zone.

This will be done by classifying more than two-thirds of the park as an “Existing Development (Built-Up)” area under the Kuala Lumpur Structure Plan 2040 (KLSP), rather than as open space or city park area.

The coordinator of the Save Taman Rimba Working Group, Leon Koay, when contacted by The Edge, says what is put in the KLSP is not consistent with the actual situation on the ground.

“They classified Taman Rimba Kiara as a built-up area. How can this be when there are no developments taking place there? It indicates that DBKL (Dewan Bandaraya Kuala Lumpur) is only focused on the development agenda. I don’t think we get the sense that DBKL is seriously committed to protecting green spaces in the city, that it is actually interested in protecting tree cover, and ensuring that there is adequate public space for the public,” he says.

This is one of the areas of the KLSP that the Taman Tun Dr Ismail Residents Association (TTDIRA) is objecting to. The TTDIRA, along with other residents’ associations and non-governmental organisations, will be lodging their objections to the plan by May 18.

The TTDIRA is contesting the legality of the development order issued by DBKL to a subsidiary of Malton Bhd, Memang Perkasa Sdn Bhd, for the development of the 3.24ha site at the park into a multi-billion ringgit high-rise development.

In a public opinion form on the KLSP, the TTDIRA states its objections to the classification of Taman Rimba Kiara as an Existing Development (Built-Up) area. The association contends that no development has taken place at the area to render it a built-up area.

The TTDIRA is also contesting the classification of two-thirds of the land in Taman Bukit Kiara as Existing Development (Built-Up) area because it far exceeds the area proposed for Malton’s condominium project.

The remaining 13 acres of the lower section continued to be known as Lot 55118. PT9244 is the plot that is currently the subject of the lawsuit before the Court of Appeal. No development work is ongoing at the site, claims TTDIRA.

As for Lot 55118, TTDIRA claims that three Federal Territory (FT) ministers have made public statements confirming that the entire area will be preserved as a public park. They did not name the ministers in the public opinion report.

“DBKL should therefore ensure that the classification in Figure 2.14 (Spatial Management Plan) is corrected to remove any reference to ‘Existing Development’ and replace the same with ‘Open Space & Recreation’.

TTDIRA has been fighting against the development since June 2016, when DBKL issued a notice on the proposed development to Memang Perkasa for eight blocks of 42 to 54 levels of luxury serviced apartments and a 29-storey block of affordable houses.

In August 2017, the management bodies of five condominiums, together with four TTDI residents, filed an application for a judicial review against DBKL and the KL mayor in relation to the decision to issue Memang Perkasa conditional planning permission and the development order.

The KL High Court granted the applicants leave to pursue a judicial review against DBKL and the KL mayor. However, on Nov 28, 2018, the court denied the applicants’ request to quash the development order.

On Dec 13, 2018, the TTDI applicant group filed a notice of appeal with the Court of Appeal to contest the High Court decision. Initial case management was set for Jan 30, 2019, but has been postponed a number of times. It is now slated for June 6 this year.

The KLSP is the most important policy document governing the structural development of Kuala Lumpur over the long term up to 2040.

Under the plan, DBKL projects the city’s population to grow to 2.25 million people by 2040, from 1.8 million currently.

The plan also aims to develop the city’s competitiveness in the sharing, digital and creative economy, improve its digital infrastructure, and for it to be a carbon-neutral city by 2050.

Besides classifying most parts of Taman Rimba Kiara as Existing Development (Built-Up), the area has also been described as having population densities of between zero and 40 persons per acre and 120 and 400 persons per acre.

“These are both clearly inaccurate as no development has occurred on the area, plus the FT Ministry has made multiple public statements that Taman Rimba Kiara will be preserved as a public park,” the TTDIRA says in the public opinion report.

Apart from that, the TTDIRA is also protesting the reclassification of Taman Tun Dr Ismail as an area for regeneration. Under the KLSP, TTDI is among the old established housing areas that is up for regeneration.

The TTDIRA maintains that TTDI is a mature, vibrant township with a high level of community activity and engagement across all ages.

“It is not a blighted, dilapidated or crime-infested area. The notion of ‘regeneration’ is not applicable or relevant to TTDI. TTDI should therefore be excluded from the list of potential areas for regeneration,” the residents association says in the public opinion report.