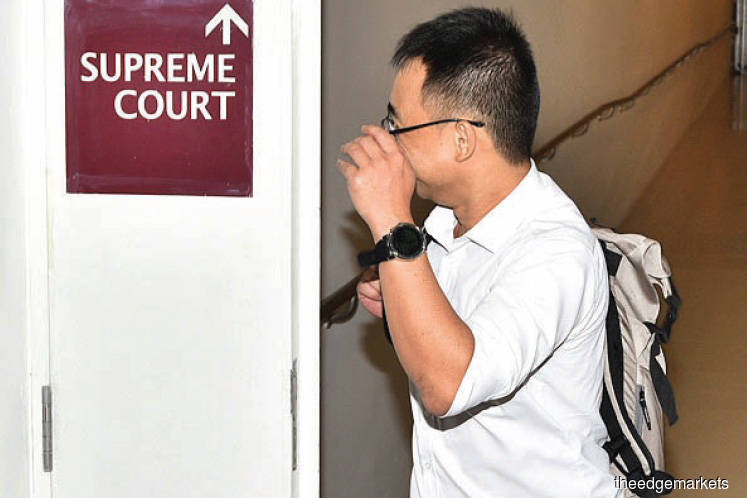 Under examination-in-chief by the prosecution, Tai (pic) recounts the way Soh and Quah had carried out their ‘market-rolling’ activities for shares in Blumont, Asiasons and LionGold. Photo by Albert Chua/The Edge Singapore

SINGAPORE: More tales of jealousy and betrayal have emerged from the trial of John Soh Chee Wen and Quah Su-Ling, as former abettor-turned-prosecution witness Ken Tai Chee Ming returned to the stand yesterday.

Under examination-in-chief by the prosecution, Tai recounted the way Soh and Quah — the alleged masterminds behind the 2013 penny stock crash — had carried out their “market-rolling” activities for shares in Blumont Group Ltd, Asiasons Capital Ltd (now called Attilan Group Ltd) and LionGold Corp Ltd.

Tai learnt that Soh and Quah were using others, including former DMG trader Leroy Lau Chee Heong, to kick-start the daily market operations.

“Leroy Lau is a trader and runs his own books. If you use him to do rolling, he doesn’t benefit, as he doesn’t [earn] commissions. So, [you] have to give him an advantage, or some benefits,” Tai shared.

Tai opined that there was no need to engage Lau. “Why should we allow Leroy to make two bids out of [Soh] and [Quah]’s pocket?” he questioned.

Instead, Tai offered Soh and Quah accounts with Interactive Brokers and Saxo Bank. Together with the accounts controlled by Soh and Quah at the local brokerages, Tai believed the “inner circle” could kick-start the daily market rolling process without using traders such as Lau.

In court yesterday, Tai also recounted an incident where Soh had asked him to “shake out” a shareholder named Tony Li Hua. Li had obtained a block of Asiasons shares after Soh had used them as collateral for a loan, and failed to pay after the tenure expired.

Tai said that Soh had told him that he wanted to move the price of Asiasons up, but would find it difficult to do so if Li still had a large block of shares. Soh explained that he did not want to buy back the shares from Li at a high price.

Tai then explained in detail how on July 10, 2013, he layered the buy queue in the pre-opening phase for Asiasons with a huge bloc of buyers from 89 Singapore cents to 93.5 Singapore cents.

Working together with Gabriel Gan and Henry Tjoa, Tai then brought the share price down from 94 to 90 Singapore cents within two hours, while leaving Li a window to sell his shares at 89.5 [Singapore] cents or 89 [Singapore] cents.

With few orders at above 90 [Singapore] cents, Tai remembered that Li did sell his Asiasons shares as a result — at significantly lower than the S$1.50 he should have.

Tai said he also asked Soh whether he could “participate” by buying Asiasons shares for himself, since Soh had told him the price would go up. According to Tai, Soh agreed for him to do so.

Tai also recounted several instances where Soh had impersonated then Blumont chairman Neo Kim Hock, one of the account holders, to deal with financial institutions.

The court yesterday heard a recording of a conference call between Interactive Brokers and Soh on Oct 4, 2013 — after the penny stock crash. During this call, Soh impersonated Neo as he tried to persuade Interactive Brokers to give him more time to work out a repayment plan to cover the losses from the crash.

“Newspapers here are bent on publishing unpleasant news about this company when we plan on doing bigger and bigger deals,” Soh could be heard saying in the recording.

Tai yesterday also shed more light on Dick Gwee Yow Pin, whom he described as Soh’s “deputy”. Tan explained that it was Gwee who, in the presence of Soh and Quah, had instructed Tai, Gan and Tjoa to obtain anonymous unregistered “bangla phones”.

Gwee had also instructed them to destroy these mobile phones after the crash. Tai then recounted how he had complied with Gwee’s order, and had crushed the phones under the wheels of his car before throwing them into the sea at East Coast Park.

Tai also revealed that Gwee was even better than Soh when it came to market making. “Any advice from Dick, John will take it seriously.”

Tai said that he had lied to the Commercial Affairs Department (CAD) in his earlier statements to cover Gwee’s involvement. He explained that this was because he felt it was Soh — and not Gwee — who had done him a disfavour.

Tai expressed remorse for turning on Gwee, who was the one who had advised him to confess to CAD.

“In fact, Dick Gwee advised me to strike a deal with CAD and come clean,” he said. “The thing he emphasised was to get a good deal from CAD before I turned… But until this day, there is no deal between me, CAD and AGC (Attorney-General’s Chambers).”

Tai said this is why he found it awkward to work with CAD in its investigations. “[Now,] I turn and stab him in the back by disclosing all his crimes,” he said.