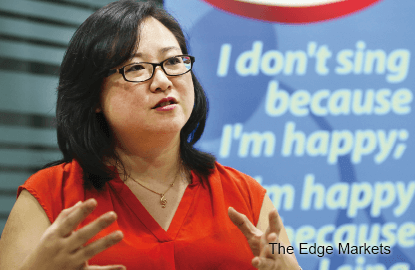 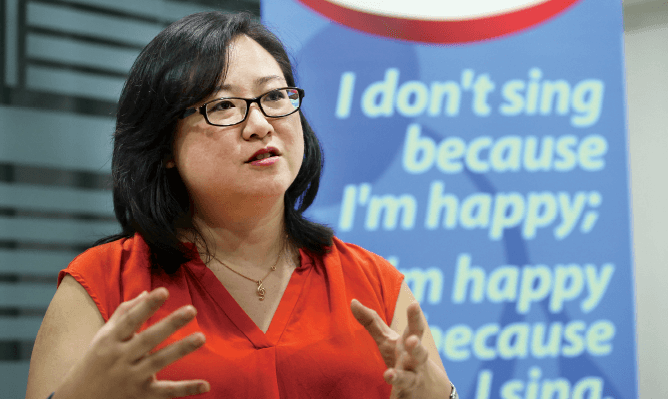 AS I stepped into the elevator behind a mature lady, she turned and smiled at me before asking, “Are you an alto?” It was not a random topic of conversation, considering that we were both headed to Harmony Hall, the space where the choir group of the Philharmonic Society of Selangor (PSS) rehearses.

I replied that I was not, and we parted ways at the door as she joined a large group of men and women to begin their warm-up vocal exercises with the choir’s band director, Nish Tham. I, instead, stepped into a makeshift office, with chairperson and choir director Cheryl Teh, to have a chat about one of the oldest community choirs in the country.

Having voluntarily helmed the Society since 2009, the full-time Knowledge Management practitioner has been instrumental in growing the choir to over 100 members today. It’s quite a feat, considering that PSS was almost shut down in 2008.

“The choir was born in the 1980s, and was long-running, but when it came to their 50th anniversary in 2008, it was down to 30-odd members. So what the choir head did was to call all the ‘old boys’ for a reunion concert. And after the concert, then had planned to just dissolve the society,” explains Teh.

She was asked to direct the last show, and agreed to. But instead of the 100 people or so they expected to attend the concert, a few hundred came. “We were bursting out of the seams and the members who came back said ‘let’s start this again’, ” laughs Teh, recalling her surprise, “I said okay, but we give it one year and see how it goes. Six years later, we’re still here.”

Today, the community choir has become a passion of sorts for her — something she hopes to broaden and strengthen as a model for other platforms. Her dedication and experience in running the choir and society has earned her a spot in the Eisenhower Fellowship where she will be working on a paper entitled “community building through singing”.

The scholarship programme connects its recipients to key people or groups that will enable them to further their choice of field or theme for seven weeks in the United States. Teh is one of two Malaysian recipients this year.

“When I go to the US this October, I want to meet other choirs, see how they run things, I want to see how they manage it from an administration and governance standpoint, [how they handle] funding,” she adds. “This is a worthwhile theme and I would like to think we can expand on it as well. I want PSS to be a model, not just for community singing … ” says Teh who started learning how to play the piano when she was three years old.

According to her there is still so much more to tap on. She cites major movements in Australia where suburban or care home choirs are making positive impacts on a community. In the United Kingdom, British choirmaster Gareth Malone has introduced Singing in the Workplace, where companies are using it as a successful form of bonding activity for employees that enhances communication and team work.

“Personally, I have seen it work. I’ve done three months of what they call workplace singing with a company here … they are now continuing on their own. The company has said it’s the best activity they’ve invested in. Anyone can do it,” points out Teh.

The diversity in PSS is testament enough, with the age of the current choir members ranging from 10 years old to 83 years old. “We are a non-audition choir now. Anybody and everybody can join,” she says. Influenced by her studies and experience in Australia, where she found other musicians who play beautifully yet have never taken an exam in their lives, Teh stresses that the community model thrives because it is inclusive.

On why she decided to make the choir a non-audition one, Teh explains: “Coming from a business background, I did a SWOT analysis on the survival of the society and realised that there is lots of competition out there, so why should people join us? We must have an edge over the others and offer something different.

“Some people come in and they never want to do a show, that’s fine. Some come to listen, maybe open their mouths for one song, and then go home. But it feeds them, it’s like a fuel … and really, who am I to reject them? And this model has worked very well for us.”

On some of the impact she’s seen with the choir, she says the singing itself is beneficial with some good physical elements. For the more mature members, she says it a form of physical and mental exercise. “I stress them out here — in a good way,” she laughs, “They need to memorise songs … initially they always complain and say they can’t do it, but it’s amazing what they can do after some mentoring. They never fail to surprise me.”

Intergenerational interaction is also one of the strong points in a community choir, as Teh says quite a few young people enjoy coming. “If it’s young children, they must be accompanied by a parent, that’s one of my criteria. It also encourages two, sometimes three generations to come together.

“There are little groups now. Sometimes they meet up to practice before rehearsals. Or they’ll go makan and jalan-jalan together. Some go for outdoor activities. They end up doing a lot of other things together,” she adds.

Announcing that she will bring 50 members to Chennai, India, for a Merdeka Friendship Tour (coinciding with the Independence Day weekend) in collaboration with Mellow Circle Choir in aid of HIV-affected children, Teh says one of the best things about PSS is it allows individuals to collectively give back to society, all while enjoying themselves. “You’ll never leave this place unhappy,” Teh sums it up.

Performing the first of their two shows annually, the Philharmonic Society of Selangor choir will be presenting their fourth Heart & Soul Charity Concert 2015, themed “Let’s Rock”, from July 24 to 26 at the Kuala Lumpur Performing Arts Centre. Conceived by choir director and society chairperson Cheryl Teh in 2003, the biannual programme features a selection of songs from different genres of popular music. This year’s show will see a throwback to rock favourites and soothing classics from both sides of the Pacific Ocean, from Queen to Bon Jovi, Bette Midler, The Carpenters and even Culture Club. Proceeds will go to Assumption — Orang Asli Ministry (July 24, 8.30pm), The Befrienders Kuala Lumpur (July 25, 3pm) and towards the Society’s upcoming joint-charity concert in India. For more information, visit www.klpac.org or call (03) 4047 9000 to purchase.