More bang for your buck with motorbike made in india 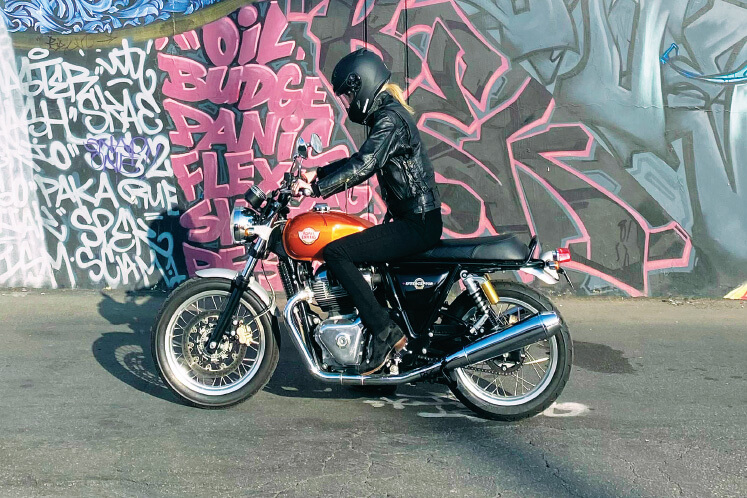 The only flaw in Wes Anderson’s The Darjeeling Limited is that he does not have the Whitman brothers — Adrien Brody, Owen Wilson, Jason Schwartzman — ride across the sumptuous Indian countryside on a Royal Enfield motorcycle. (They ride a Honda, which, I guess, is fair. Honda owns 26% of the motorcycle market in India.)

But I would have made it a Royal Enfield. The Indian connection is perfect: The formerly British brand is a publicly offered subsidiary of Eicher Motors Ltd and located in Chennai, India; it manufactures all of the 900,000 bikes it sells worldwide each year there, too. (Design and engineering are handled out of the Bruntingthrope Proving Ground near Leicester, England, and in Chennai, India.) Myriad Bollywood stars, plus Brad Pitt, are fans.

Most important, Royal Enfield motorcycles have the same vintage feel and styling — like thread-worn but chic mustard-yellow corduroy — that makes Anderson’s movies so charming. The Royal Enfield Interceptor 650 (INT650) I rode for a week in Los Angeles is not the smoothest,  the fastest, or the most efficient of the motorcycles I have ridden recently. But with the cool vintage styling, affordable performance, and reliable construction that match the promise of its brand, it is the most endearing.

You have probably heard the name before. Royal Enfield is the brand name under which the Enfield Cycle Company of Worchestershire, England, produced motorcycles, bicycles, and even lawnmowers after incorporating in 1896. It made its first motorcycle in 1901.

It is the oldest continually produced motorcycle brand in the world. During World War II, the British War Office used the Royal Enfield WD/RE, aka “Flying Flea,” to transport messages between airborne and ground troops; the bike was so light it could be dropped by parachute or carried in gliders. The company’s old-world, military-style Bullet models from the early 1930s are the most recognisable from the early days, though the original Interceptors made from 1960 to 1970 look cooler.

In 2015, it surpassed Harley-Davidson in global motorcycle sales, but you would be hard-pressed to find someone in the US who actually owns one — the brand sold just 3,500 motorcycles in the US in 2019. Breeann Poland, the head of marketing for Royal Enfield in America, says that is changing: “We have consistently increased sales and dealership presence year-over-year since taking over ownership of sales and distribution in 2016,” she said in an email. “Our [650-engine] line-up and affordability has put us in a prime position to capitalise on a segment that we feel many manufacturers are overlooking.”

Royal Enfield North America currently offers the Bullet 500, Classic 500, Himalayan, and the all-new 650 Twin motorcycles (the INT650 and Continental GT 650) in the US market. The modern Interceptor I rode was introduced in 2018. Known in the US as INT650, it carries the same look as the original: A single round headlight up front, classic teardrop tank, wide-set and upright handlebars, and a flat seat perfect for two riders.

I loved the bike because of how inexpensive it was — just US$5,799 (RM25,168) for the one I rode, painted in straight-from-the 1970s “Orange Crush” — without sacrificing such period-correct details as that headlight, clean lines, and the perfect diamond-quilted black-leather seat you could imagine sitting on while riding through Laurel Canyon with your beau. (Other colour options for the gas tank, such as the cool UA$6,499 Glitter and Dust silver tone, cost marginally more.)

The 18-inch, 36-spoke aluminium alloy wheels with Pirelli tyres were specifically made for this model; the twin-pod instrument cluster with small digital instrument screens is simple to read; the wide-braced handlebars allow for a commanding view of the road and an upright seating position.

Down for the ride

As I stepped onto the bike for the first time one late February afternoon, I noticed that the 31-inch seat ride height would be easily rideable for shorter riders under 5’5 ft tall, especially those wearing boots. (Taller riders such as myself, and those who prefer the tall, upright feel of dirt- and touring bikes, may find it slightly low.) It started easily with one press on the tiny lever under my thumb; cold starts are no issue here. The air- and oil-cooled, 648cc parallel-twin engine gargled to life; I smoothly twisted the throttle and swung out of the driveway and onto the street.

The INT650 has 47hp on its 202kg body — plenty of grit and thrust to stay stable at 60mph (96.56kph) and 70mph on the highway, though heavier, larger and more experienced riders will quickly wish for more power. It comes with six quick speeds, ABS and a forgiving, piggyback reservoir suspension chosen for its clean and modern look in the rear subframe. As I wound through downtown Los Angles, I found it to have a good lean angle and easy handling across tight turns and pivots in the road. It worked best winding through the galleries and cafes of Los Angles’ arts district and cruising over the historic concrete bridges of the Los Angeles River.

Even better, the gas tank holds 4.8 gallons (18.17 litres) and gets roughly 60 miles to 70 miles per gallon depending on how aggressively you ride.

Long-time riders will notice that the INT650 is neither as smooth nor refined as a Ducati or Triumph bike, or as hefty underneath as a BMW R NineT. But Royal Enfield amply fulfills its promise to deliver “iconic and affordable” motorbikes. It proves you do not have to pay the premium (US$14,000 for the Triumph Scrambler; US$8,699 for the Harley-Davidson Street Rod) to own something that harkens back to easy, cool, California carefree living.

The Interceptor 650 certainly qualifies for that distinction. It was a joy to ride. After one week with it, I was ready to film a Darjeeling Limited of my own. — Bloomberg