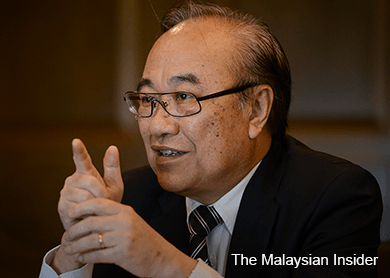 (Apr 9): Minister in the Prime Minister’s Department, Datuk Paul Low shares his vision for a better Malaysia as he marks two years in office this May, with an exclusive interview with The Malaysian Insider. In the final instalment of a three-part report, Low talks about money politics as being Malaysia’s "kryptonite", warning that unless corruption is weeded out of government institutions, the nation can never prosper.

That corruption is a multi-faceted problem in Malaysia which takes on many forms is indisputable, but for Low, who is the minister in charge of governance, integrity and human rights, money politics remains the biggest deterrent in the push for a more transparent and open government.

“With the issue of petty corruption, you pay the police, or you pay somebody to push a file, for instance, but what is more serious is corruption relating to 'state capture'.

"Basically, this is where people in power – politicians, civil servants and so on – find a way of exploiting the weaknesses of the government or bypassing the proper good practices of government and gaining for themselves a tender or license.

“They capture the machinery of the state to serve themselves, or to serve members of their families or to give benefits to their proxy or supporters, in the case of politics,” Low told The Malaysian Insider.

Calling it the "unholy alliance" between politics and the corporate world, Low said money politics was the biggest problem crippling the country in the goal towards becoming a corrupt-free government.

“In Malaysia there are no strict laws or rules on political financing or political campaigning. The fact is, for any government in power, you need money for elections, so where do you get this money … you get it from the business side,” Low said.

“This is the unholy alliance between business and politics.”

He said that in Malaysia, most corporations gave financial backing to both sides of the political divide, but existing laws do not require political parties to declare where the funding came from.

“Businesses have to keep quiet so that they won’t be penalised by the government. Many give to both sides, hoping that when the person comes into power, that is when they require that same person to favour them.

“That is where political corruption and the economic institution come together, and that is where you have ‘state capture’.

“This issue of money politics is an issue which is one of the biggest challenges that I have to tackle," said Low.

He said in more politically mature countries, the problem is addressed by state financing where political parties are only allowed to get campaign funding from the state.

However, both the government and opposition in Malaysia were not fully in favour of state funding, said Low.

“Both sides don’t want state financing because Pakatan Rakyat also has their supporters, and many of their supporters are also supporters of Barisan Nasional. It’s all kept quiet and unwritten, but you can guess from the contracts that are given and so on,” he said.

Low said that because the country was not yet ready to adopt state financing, he believed that the next best thing was to create a more transparent exchange of funds between the corporate world and political entities.

“The issue is, I can’t deal with political financing, so I have to put in all the safeguards against its consequences,” he said.

These safeguards include ensuring transparency in the management of government operations such as open tenders, as well as trying to create a more open environment for political funding.

“Today, financing goes to individuals in a party. You don’t have a clue whether you are paying him or the party, or whether there are expectations that come with the payments.

“A proposal that we made is that no individual is allowed to receive political funding, it must all go to the party. When it goes to the party, it will be held accountable,” said Low.

He said the government was also aware of the need to adopt more transparent practices, and believes that Prime Minister Datuk Seri Najib Razak has shown political will for change.

However, changing the deeply-entrenched mindset and operational methods of government agencies will take time.

“Corruption and social justice were key issues for the voters in the past two elections,” said Low.

“In the past we were concerned about development, such as how many schools there are and so on.

“But there is a change in urban areas. People today are more concerned with rights, with integrity and good governance, probably because in every society when you reach a level of development, you’re not so hungry. So you’re more concerned with issues that have to do with democratic rights,” he said.

As the former president of Transparency International’s Malaysian chapter, Low said he was aware of the importance of good governance in the economic development of a nation, and warned that Malaysia cannot grow to a high income level until corruption is weeded out in government.

“If you look at every single country that has got an advanced economy, they have a culture of intolerance of corruption in governance. Countries collapse not because of economic reasons, but because of corruption,” he said.

“It’s not just a simple case of paying a bribe. It’s an economic imperative.” – The Malaysia Insider