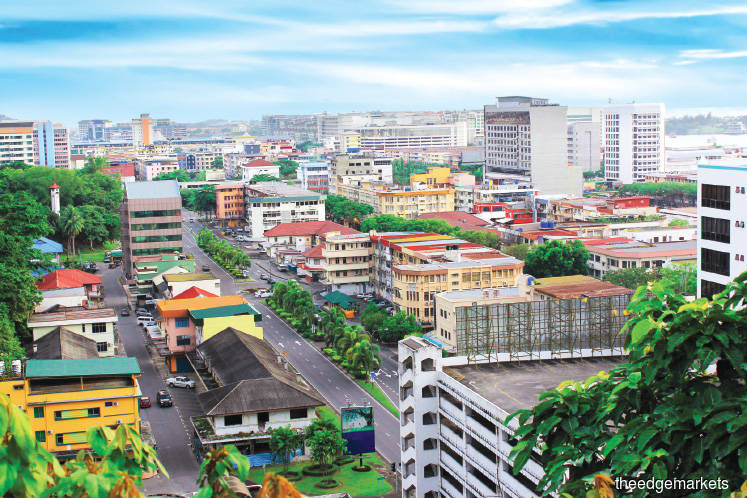 The skyline of Kota Kinabalu Max: The HOC 2019 has stimulated interest among homebuyers, especially for residential properties below RM500,000 each

“The residential property market remained buoyant and stable during the first half of the year, despite the challenging conditions of the soft market,” he continues. “Residential properties in good locations remained sought after and the limited supply of new landed houses across the Kota Kinabalu conurbation saw prices for landed houses on the secondary market continue to increase, albeit moderately.”

Also boosting the property market was the introduction of the Home Ownership Campaign 2019 by the government in the first half of the year.

“The campaign has stimulated interest among homebuyers, especially for residential properties below RM500,000 each,” says Max. He adds that properties in mature areas — where there are amenities such as schools and commercial areas as well as good infrastructure — with price tags of RM600,000 to RM800,000 have been transacted due to their good locations.

Max highlights that due to the soft market and changes in the political landscape, no significant residential developments were launched in the first half of the year.

“Transactions in the primary market involved unsold units in projects that were under construction and launched in 2017 or 2018. In this challenging market, developers have resorted to offering incentives such as rebates on selling prices, lower down payments, free legal fees, complimentary interior design packages and referral incentive schemes.”

Buyers looking for properties in the secondary market had better bargaining power due to the soft market.

Due to the rising cost and scarcity of land, developers are looking to develop projects to the north and south of the city centre, 20km to 30km away. Areas in the north that are in focus include Menggatal, Inanam and Jalan Tuaran up to Tuaran while in the south, they include Putatan, Lok Kawi and Kinarut, says Max.

He believes that more high-rises will be developed due to the smaller land areas and the flexibility in unit configurations, which will “translate into lower quantum prices for better affordability and therefore enhanced marketability”.

However, an increase in high-rise units could lead to downward pressure on rents. “This is because renters will be spoilt for choice, and this is evident from the drop in rental rates in our samples,” he says.

In the second half of the year, a handful of residential projects will be launched, says Max. They include Forest Hill Residences in Jalan Bundusan, Penampang, by Peak Sunrise Development Sdn Bhd; Kinarut Ceria Phase 2 in Kinarut by U Properties Sdn Bhd; and Likas Vue in Likas, Kota Kinabalu, by Harmoni Bumiria Sdn Bhd.

“Forest Hill Residences and Kinarut Ceria Phase 2 are located outside of the Kota Kinabalu conurbation, while Likas Vue is within Kota Kinabalu city,” he adds. He expects to see good take-up rates for these developments as long as homebuyers are able to obtain the necessary financing.

Once the CityPads project in Jesselton Quay — offering 698 serviced apartments — is completed by year-end, it will transform the northern corridor of the city centre and have a positive impact on the modernisation of the city, opines Max.

“On the secondary market, prices were seen moving upwards. Our sample of landed properties recorded year-on-year price increments of 3.67% to 8.47%. Our condominium samples saw y-o-y price growth of 1.2% to 6.1%, with no price growth recorded by one of the samples (Jesselton Condominium). Despite the upward movement in prices, gross rental remained unchanged in all the samples and thus, contributed to lower gross yields,” says Max.

Similar to Kota Kinabalu, Sabah’s housing market showed steady growth, according to Max’s analysis, based on data from the National Property Information Centre (Napic). This is based on 1Q2019 data, which reveals that property transactions in the state increased by 18.64% to 1,591 from 1,341. However, in terms of value, they only grew by 1.08% to RM516.91 million from RM511.37 million. It is worth noting that 77.75% of the residential transactions during the quarter was below RM250,000, which means that affordable homes continued to be in demand, he points out.

So, where should investors and homebuyers go to look for potential investments and good buys? Max highlights that older houses in the secondary market, such as condominiums in the Likas area as well as terraced houses and apartments in Putatan, Kepayan and Penampang, are worth checking out. Meanwhile, in the primary market, upcoming developments along the Pan Borneo Highway — which is still under construction — such as Lok Kawi and Kinarut are potential hot spots to keep an eye on.