Mitraland to launch The Tresor @ Gravit8 in 1Q2021 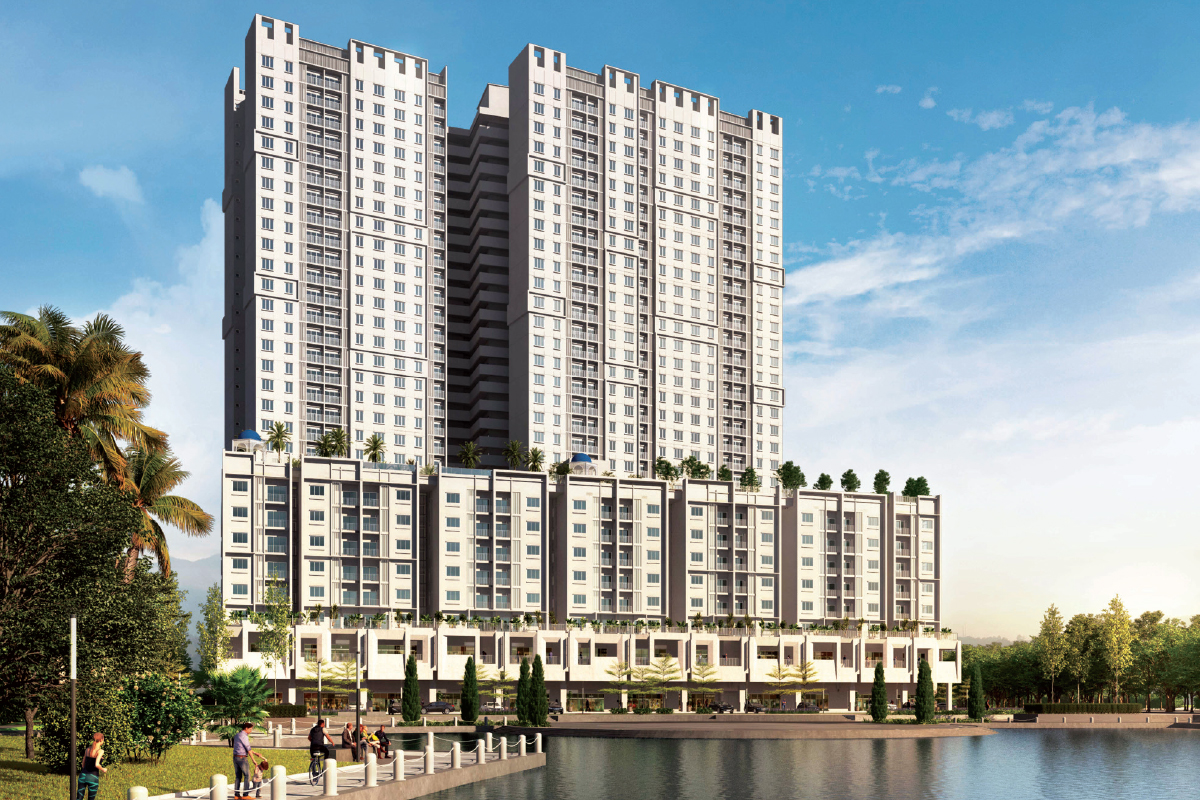 An artist’s impression of The Tresor (Photo by Mitraland Group)

Mitraland Group plans to launch Phase 2C — The Tresor — at its 15.6-acre mixed-use development Gravit8 in Klang South by the first quarter of next year. Registration of interest will start in November. “Tresor” means “treasure” in French.

“The development will be based on the concept of Santorini as it will overlook the lake park. These units will have an emphasis on families, providing them with a place to relax and unwind when they get home, as well as enjoy scenic views of the lake,” says group CEO Datuk Andy Khoo.

Occupying a 2.75-acre freehold parcel in Gravit8, The Tresor will have a gross development value (GDV) of RM240 million. It will comprise a 29-storey tower with a total of 344 serviced apartments, 72 park homes and 25 two-storey shops.

Khoo highlights that the park homes, which will have built-ups of 1,175 to 1,206 sq ft, will be located on the lower floors of the tower.  These units will come with parking bays in front of them,  which will give residents the experience of living in a landed property with condominium facilities.

There will be more than 1,100 parking bays in the development and each unit will be entitled to two to three. The facilities will include an infinity pool, wading pool, Jacuzzi, gymnasium, multipurpose hall, half basketball court, children’s playground and reflexology path.

With a GDV of RM1.3 billion, Gravit8 comprises both residential and commercial components such as serviced apartments, a shopping mall, retail shops, offices and hotels. It also has an eight-acre man-made lake park that focuses on placemaking.

“There will be an 800m jogging track and a playground. We have also created a waterfront/lake promenade — a floating platform of 30,000 sq ft,” says Khoo. “These facilities not only cater for residents of Gravit8 but also the communities that surround the development such as d’Laman Greenville, Bandar Parklands, Bandar Botanik, Bandar Bukit Tinggi, Kota Bayuemas and Glenmarie Cove.”

According to the developer, the units at The Tresor are targeted at first-time homebuyers, singletons, young starters, young couples, young families, downsizers and retirees. Most of the purchasers are expected to be owner-occupiers while 15% to 20% of them are anticipated to be investors.

“We do not just build houses but strive to form a community-driven hub in Gravit8. Thus, it is important to design products with communities in mind and provide a modern lifestyle that is unique to the buyers,” says Mitraland Group founder and deputy executive chairman Chuah Theong Yee.

“Affordability is key in today’s property market. We are a realistic developer in providing an affordable range of products in well-connected locations and good quality facilities.” The two-storey lifestyle retail mall, called Pier8, has a net lettable area of 150,000 sq ft and is slated to open in 1Q2021, subject to market conditions. It will feature a 6m standalone saltwater aquarium, a grocer, seafood emporium, international school and food and beverage outlets.

According to Mitraland Group chairman Datuk Johan Ariffin, the third Orbix International School by Orbix Education Group will occupy 55,000 sq ft in Pier8 and is expected to start classes in January next year. The campus will be its flagship School of Artificial Intelligence and Robotics.

“Orbix Education will be partnering China-based artificial intelligence technology company iFlytek to offer Malaysia’s first ever AI syllabus for students aged 6 to 18, which will cover areas such as coding, machine learning and robotics. Thus, it will provide an alternative to the community, whereby students will be able to learn AI from an early age, engaging them through games before progressing to the complexity of coding at the secondary levels,” says Johan.

Phase 2B comprises the third and fourth towers of serviced apartments — Andaman and Ashino — which were launched in March 2018 and last April respectively. Both towers have seen a take-up of almost 90% and will be handed over in 2Q2021.

In view of the good response to the previous towers, the developer is confident that there will be demand for The Tresor regardless of market conditions. During the Movement Control Order (MCO) period, the group was not able to market its products the conventional way and turned to digital online marketing to reach prospective buyers.

“We provided virtual tours of show units for buyers to experience the properties as well as online consultations. The MCO period did affect the demand for our projects slightly, but sales have picked up since July. Although construction activities were also affected by the MCO, we are now going full steam to ensure our projects will be delivered on time,” says Chuah.

Mitraland Group launched Upperville @ 16 Quartz last June and more than 60% of the units have been taken up to date. The 24-storey condominium, with an estimated GDV of RM130 million, sits on a 2.7-acre parcel in Melawati, Kuala Lumpur, and will comprise 176 units starting from RM707,000. The project is expected to be completed in 3Q2023.

Meanwhile, the group’s first overseas project — Esque South Yarra in South Yarra in Melbourne, Australia — which is currently 55% taken up, was completed and handed over this year. With a GDV of A$57 million (RM170.4 million), the development comprises a 17-storey tower with a rooftop garden. There are a total of 60 units and prices start from A$1,000 (RM2,973) psf.

Mitraland Group still has about three acres left in Gravit8 for the development of serviced apartments, with an estimated GDV of RM300 million. The group is looking to acquire land as well, either on a purchase or joint-venture basis, mainly in the Klang Valley. “We have secured 20 acres of industrial land in Puchong with a GDV of RM230 million and are currently in the planning stage,” says Chuah.