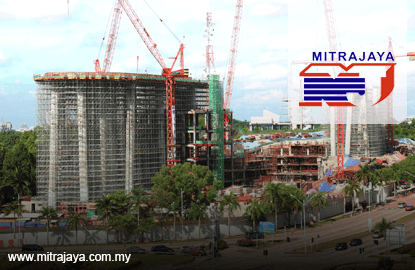 The projects can last until 2018 while management actively seeks to replenish its order book by bidding for new projects.

Mitrajaya is tendering for projects worth RM2.7 billion, mainly from buildings at RM2.2 billion (75% from government-related bodies, 25% private jobs) and infrastructure at RM500 million.

We understand that the company will be bidding for more infrastructure works going forward, and the current tender book for this segment is largely made up of jobs given out by the refinery and petrochemical integrated development project in Johor.

With the slew of projects such as Mass Rapid Transit Sungai Buloh-Serdang-Putrajaya line and Light Rail Transit Line 3, we expect small- and medium-sized construction players like Mitrajaya to potentially benefit from subcontracts.

Mitrajaya is the developer of Blue Valley Golf and Country Estate, a business and residential property development situated around an 18-hole golf course, 42km away from Johannesburg, South Africa.

The group has sold 1,100 parcels of residential land and another 18.7% of undeveloped land. In 2014, it started to develop houses, which yield higher margins, instead of just selling residential lots.

It targets to build 140 houses over the next three years. It is also slated to develop a neighbourhood mall, office building, medical centre and high-end serviced apartments.

The overseas development project contributed 12.9% of the group’s FY15 PBT with a margin of 41%. We expect this division to contribute a similar quantum in FY16. — MIDF Research, April 13.