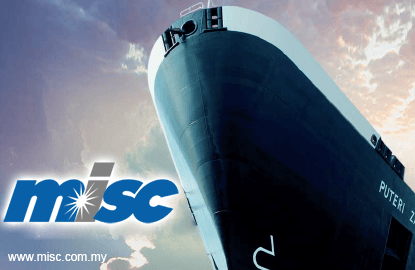 Revenue was down 8.8% y-o-y at RM2.29 billion, from RM2.51 billion when net profit was RM483.56 million or 10.8 sen per share, as weaker revenue was recorded across petroleum, heavy engineering and LNG segments.

MISC, a 62.7%-owned subsidiary of Petroliam Nasional Bhd (Petronas), did not declare any dividend for the current quarter under review.

Notwithstanding the weaker quarterly performance, its net profit for the cumulative nine months ended Sept 30, 2016 (9MFY16) was up 19.6% to RM2.05 billion or 46 sen per share against RM1.72 billion or 38.4 sen per share, mainly driven by its 'others, eliminations and adjustment segment', which swung back to the black with an operating profit of RM233 million from an operating loss of RM8.7 million a year earlier.

The shipping giant, however, reported lower revenue during the period, down 6.8% to RM7.08 billion from RM7.6 billion, on lower revenue at its LNG and heavy engineering segments.

On prospects, the shipping giant said the LNG shipping market is currently overwhelmed by the number of unused newbuild deliveries, which continues to dampen the long- and short-term charter markets, though it expects its present portfolio of long-term charters will support the steady financial performance for its LNG business segment.

Petroleum tanker charter rates, meanwhile, has softened considerably in the middle of the year as the sector took delivery of a higher number of newbuilds amid the build-up in global crude and products inventory.

"However, in tandem with the pickup of refinery activities leading up to the peak winter months, we expect our petroleum shipping business to end the year on a firmer note," it said.

As upstream activities in the oil and gas sector remain subdued, prospects of new tenders and projects remain poor in the offshore segment, it said. As such, it expects orderbook replenishment to remain challenging, while underused assets may subject the group to impairment charges which will significantly affect its current year financial results.

"Despite the lack of greenfield projects, our offshore business unit has been able to participate in bidding for various brownfield development projects. Long-term contracts in hand will continue to support the stable financial performance of the offshore business segment," it added.

As at 3.19pm today, shares in MISC were unchanged at RM7.52 for a market capitalisation of RM33.61 billion.