PLANS by MISC Bhd to hive off its chemical tanker fleet to Greece’s Empire Chemical Tankers are understood to have hit a snag, resulting in the deal falling through.

While there are no details, shipping industry sources say the news has been circulating, while international shipping publications had reported that the deal had been scuttled.

The price tag for the fleet of seven vessels was about US$230 million (RM767.2 million), some news reports had said.

“Talk of MISC’s deal with the Greeks falling through has been circulating since the end of last month. Nevertheless, there will surely be other buyers [as the chemical tanker] fleet is relatively young,” says a source.

MISC’s plan to sell its chemical tankers first surfaced in May, and came after the company had sold off its container shipping business, bulk carriers and haulage arm as part of a larger plan to concentrate on energy carriage.

However, it is noteworthy that the Baltic Clean Tanker Index (BCTI), which tracks the cost of chartering chemical tankers, has gained about a third or 34% since early September this year and is now at the 730-point band, the highest since end-2012.

It is thus possible that MISC may get more than the US$230 million estimate if BCTI maintains its current level.

However, when MISC announced its financials last week, the company said “chemical and petroleum shipping prospects remain challenging amid a vessel oversupply market”, which could be taken as an indication of the current situation.

Whether BCTI can sustain its momentum remains to be seen.

Stolt-Nielsen, the world’s leading chemical tanker player, is waiting to take delivery of five 38,000 dwt tankers from Chinese shipyards next year, to add to its 150-vessel fleet. Globally, shipyards’ order books grew about 7% last year but is forecast to expand at a 30% clip in 2014.

MISC registered a net profit of RM1.2 billion on revenue of RM7 billion for the nine months ended September 2014. In contrast to the corresponding period a year ago, net profit was up 24% while revenues rose a marginal 2.9%.

However, the performance of the chemical tanker unit cannot be ascertained as its earnings are lumped with that of the liquefied natural gas (LNG) and petroleum shipping arms.

In the notes accompanying its financials, MISC says, “Improved freight rates in petroleum business and higher earning days in the LNG business were the main contributors to the increase in group revenue.

“However, a smaller fleet of operating vessels in the chemical business and lower revenue recognised by heavy engineering in the current year, from different phases of project construction, partially negated the increase in group revenue.”

This could mean that MISC’s fleet of seven chemical tankers is no longer operating and possibly dry docked, waiting to be sold.

Apart from the chemical shipping arm, other assets could also be up for sale.

MISC has a 15.7% stake, or close to 74 million shares, in NCB Holdings Bhd, and is the second largest shareholder in the port operator.

Considering that MISC is in the midst of selling its haulage arm — MISC Integrated Logistics Sdn Bhd — to a company linked to Utusan Melayu (M) Bhd for RM250 million, the block in NCB could be next. 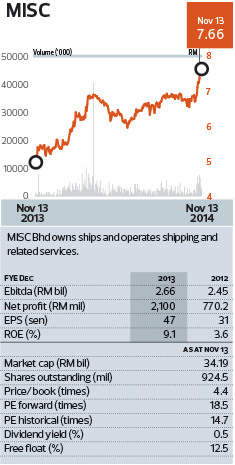 In November 2011, MISC had announced its plans to exit the container shipping business, and sold off its fleet on a piecemeal basis. In May 2009, it exited the Grand Alliance — a slot-sharing arrangement between some of the largest container shipping companies such as Germany’s Hapag-Lloyd, Japan’s NYK (Nippon Yusen Kaisha) Lines and Hong Kong’s Orient Overseas Container Lines (OOCL).

Thus, it should not come as a surprise if MISC were to exit from NCB. NCB’s stock has been on a downward spiral, shedding about 20% since the middle of the year.

To put things in perspective, this time last year, the market value of MISC’s 15.7% stake in NCB was close to RM270 million, but is now worth only about RM175 million.

The slump in NCB’s stock price can be attributed to several factors. In August this year, after a forensic audit on NCB’s wholly owned unit Kontena Nasional Bhd, PricewaterhouseCoopers said certain company officials had inflated revenue and suppressed operating expenditures. The adjustments were pegged at RM56.6 million, out of which RM32 million were accrual of costs while an additional RM24.6 million was over-recognition of revenue from 2010 till 2013.

However, considering that MISC is a long-standing shareholder in NCB, it is likely to have gained from this investment, considering NCB’s steady dividend payments over the years.