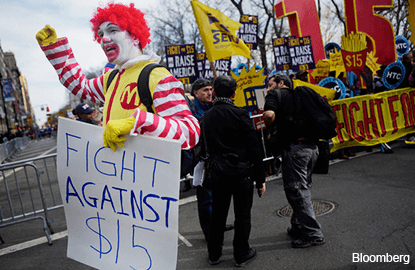 This article first appeared in The Edge Financial Daily, on November 11, 2015.

THE debate about the minimum wage is often too simplistic. It is usually just about whether minimum wages are good or bad — as if the answer would be the same across all of time and space. In reality, the answer should be a nuanced one.

Obviously, if we were to raise minimum wages to US$400 (RM1,752) an hour, the economy would collapse. Minimum wages that are fine in one area will cost lots of jobs in places where prices overall are lower. Minimum wages will tend to help certain groups and hurt others. The list of qualifications and caveats goes on and on, but is typically drowned out in the partisan shouting.

I would like to add one more caveat to the list. Minimum wages may be perfectly fine when the economy is doing well, but be a drag in times of recession. That could bias us toward thinking that minimum wages are good, if our studies of their effects are limited to prosperous times.

The reasoning behind this argument is not hard to see. During good times, a rise in the minimum wage to, say, US$15 per hour may not be onerous — it might represent only a small increase over what employers are already paying. Even businesses that are forced to raise wages in response to the hike might be able to take the hit, thanks to the cushion of their profit margins during booms.

In other words, if the economy is healthy, the new US$15 may have no visible negative effect on employment, and will merely redistribute some income from company owners to workers.

But then a recession comes along. In response to lower demand for their products, companies will naturally want to cut wages temporarily. But the new US$15 minimum may make it impossible for them to drop wages enough to keep all their workers employed. These companies will have only one alternative — lay off workers.

That will mean a bigger rise in unemployment than would otherwise happen. In other words, minimum wages may make employment more vulnerable and susceptible to macroeconomic shocks.

Of course, we would like the government to counteract all recessions with wise application of monetary and fiscal policy. But hard experience has shown that eliminating the business cycle will never happen — there will always be economic downturns. So the threat of recessions is one that businesses will continue to face. So if minimum wages do make companies more vulnerable to downturns, then that is a mark against them.

There is some evidence in favour of this kind of effect. The study that minimum-wage proponents most often cite was the famous natural experiment of economists David Card and Alan Krueger, who found that a 1992 increase in the minimum wage in New Jersey — to a level that was very high at the time — had little effect on unemployment. But the economy in 1992 was already in recovery mode from the early-1990s recession, and would boom the rest of the decade.

A raft of other studies of minimum wages that followed all took place during the longest period of American prosperity since World War II. If you looked only at the evidence from the 1990s and early 2000s, you see almost no harmful effects from minimum wage hikes.

Those good times came abruptly to an end in 2008, with the financial crisis and the ensuing deep recession. Since then, some studies show more negative effects of minimum wage hikes. For example, there is the late 2014 study by economists Jeffrey Clemens and Michael Wither, entitled “The Minimum Wage and the Great Recession: Evidence of Effects on the Employment and Income Trajectories of Low-Skilled Workers”.

That contradicts the results of earlier studies. Clemens and Wither might have simply made a mistake in their analysis (I cannot find any obvious ones with a cursory examination), but there is another possibility — minimum wages might cause more harm in recessions than in normal times.

Of course, that does not mean minimum wages are bad across the board. In fact, it does not even mean that they are bad in recessions — the wage gains for the majority of workers who keep their job might outweigh, in some utilitarian moral sense, the losses to the unlucky few who get laid off.

That is not an easy question to answer. But these findings do indicate that the varying effects of minimum wages in different time periods should be something to consider in our national debate. Currently, no one seems to be thinking about this at all. — Bloomberg View