Eversendai Corp Bhd
(Dec 23, RM0.51)
Maintain “neutral” with a lower target price (TP) of 54 sen from 73 sen previously based on eight times (from 10 times) revised financial year 2015 forecast (FY15F) earnings per share, at a discount to our one-year forward sector target price-earnings ratio of 10 times to 16 times. This is because Eversendai’s earnings risk has risen, given its Middle East exposure.

The recent collapse in crude oil prices will have a negative bearing on oil wealth, and hence impede the ability of certain oil-exporting countries in the Middle East to continue with their spending on lavish projects.

This does not augur well for Eversendai, which derives about 80% of its revenue and 50% of its profits from the Middle East. Its current order backlog of RM1.6 billion will only lend earnings visibility over the next 18 months.

While we acknowledge that Eversendai is a globally competitive structural steel contractor, it needs to more effectively monetise its strengths before a stock rerating can ensue. — RHB Research, Dec 23 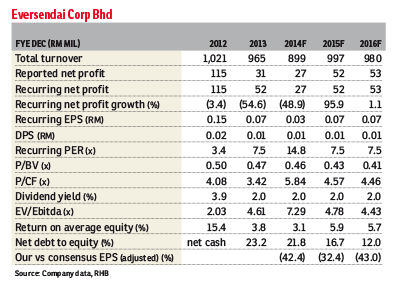