MIC may see double polls as leadership spat drags on 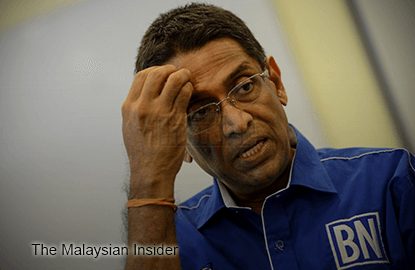 "Anyone can call for an election, that will be a NGO (non-governmental organisation) election, not a MIC election," Subramaniam said during a press conference at MIC headquarters today in Kuala Lumpur after a meeting of the 2009 central working committee (CWC).

Palanivel yesterday set his own dates for party elections after claiming to have chaired a meeting of the interim 2009 CWC, but Subramaniam shot that down as well, saying that there was only one 2009 CWC line-up.

The party elections called by Subramaniam's camp is set to start with branch elections scheduled for the end of July.

Palanivel yesterday had called for branch elections to be held in July as well, with nominations on July 15 and 16, and elections from July 24 to 26.

The election for the party president will be in September, he had said.

Palanivel and his CWC that met yesterday also passed several resolutions, including instructing letters to be sent to all branches not to entertain any request by Subramaniam's camp with regards to elections by his group.

Palanivel and his deputy Subramaniam have been locked in battle for control of MIC since disputes over the results of party elections in November 2013, which led to the Registrar of Societies (RoS) ordering re-elections.

Palanivel says he has suspended Subramaniam's membership, while the latter says that Palanivel is no longer an MIC member because of legal action he took to stop the RoS directive on re-elections.

Subramaniam today expressed confidence that MIC branch chairmen will not be confused by the possible separate elections.

"The MIC branch chairmen are intelligent people. They might not look so, but I believe they have political wisdom. They know what RoS has said," he said.

"They need not be confused. If you think they will be, I think you are underestimating them," said Subramaniam, who is also health minister.

RoS, in a recent letter, said it had acknowledged Subramaniam's claim that Palanivel was no longer a MIC member after the latter took party affairs to court.

Palanivel had lost his judicial review bid to challenge the RoS decision in declaring the 2013 MIC elections null and void.

On Palanivel's party membership, MIC secretary-general Datuk S. Sothinathan yesterday told the press he would be meeting RoS to sort out Palanivel's status. – The Malaysian Insider